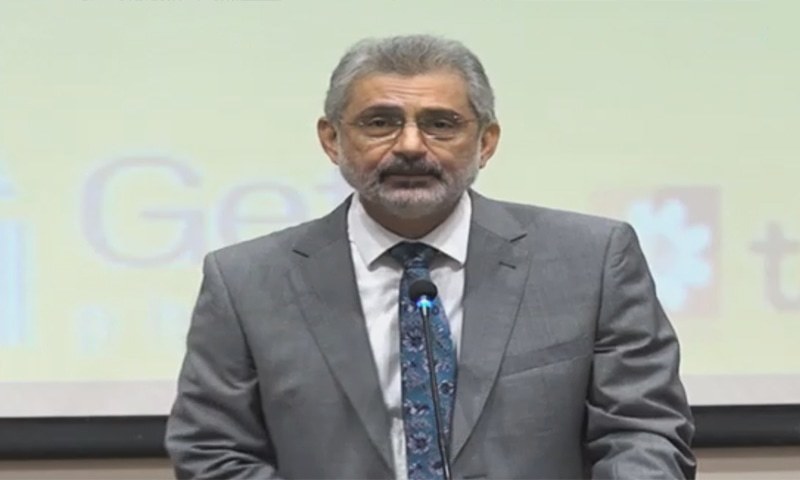 ISLAMABAD: Justice Qazi Faez Isa on Monday turned up for the second time before a 10-judge Supreme Court bench hearing a set of review petitions and apprised a visibly disturbed court that he and his family would argue the case instead of his counsel Muneer A. Malik, who is unwell.

Earlier also, on June 17 last year, Justice Isa had written history by entering the Courtroom No. 1 as a messenger to seek an audience for his wife Sarina via video link and satisfy the 10-judge full court regarding the source of three offshore properties in her and children’s name. He then was attired in a grey suit, as on Monday.

Justice Isa’s wife Sarina and daughter Saher were also present in the courtroom on Monday.

Standing behind the rostrum, Justice Isa contended that he wants this case to finish before one of the members of this bench, Justice Manzoor Malik, reaches superannuation next month.

“And this case is extremely important since I want accountability of the judges as well as of the government and Supreme Judicial Council (SJC) and that the eyes of the entire nation are on this case,” Justice Isa argued, while extending his sincere apologies to the court for his appearance and suggesting that the case be heard from Tuesday.

And if possible the court should also hear his application moved on Thursday, seeking an order that the state-owned Pakistan Television Corporation (PTV) be directed to broadcast live the proceedings of the present case. The application, Justice Isa contended, was not filed to seek any publicity but to rebut the allegations levelled against him and his family and recalled that the presidential reference filed against him was confidential and secret, yet he received the copy after it was made public.

Justice Bandial reminded the petitioner judge that in review petitions the court needed to issue notices to the respondents so that they could also hear his contentions and said Attorney General for Pakistan (AGP) Khalid Jawed Khan was not present today (Monday).

This was discourteous that AGP who was present in every other case was not here, regretted Justice Isa.

Additional Attorney General (AAG) Chaudhry Aamir Rehman informed the court that the AGP had contracted Covid-19 virus while Law Minister Dr Farogh Naseem, who was appearing before the court earlier, had been out of the country for 12 days.

Justice Isa reminded the court that his application seeking live telecast of the hearing was unusual but also necessary because he had been castigated and seared in public and, therefore, the AAG should seek instructions for making arrangements in this regard.

Justice Bandial observed that Justice Isa had himself conceded that his application was first of its kind and the court would like to know about the government’s instructions, but granting such a preference would also mean allowing others in future to seek a similar remedy by citing this case as precedence.

“Therefore, the court needs a lot of consideration and understanding before issuing any directive in this regard,” Justice Bandial said, adding that the court was issuing notice in the review petition but should Justice Isa like to argue this application first or the review petitions. The court was also not sure whether the steps to broadcast the proceedings live could be handled properly.

Justice Bandial asked the AAG to inform the court what steps the government would take for live broadcast of the present hearing.

After consultation with other judges, Justice Bandial also re­­minded Justice Isa of the Supreme Court Rules which required that only the counsel, who had argued a case at the principal stage or the first round of hearing, could argue before the bench which was seized with review cases.

Therefore, he said, Justice Isa’s counsel Muneer Malik should submit an application specifically explaining why he could not argue the case at the review stage. “We cannot relax rules unless there is a sufficient material before us,” Justice Bandial observed.

Justice Isa said his counsel had messaged him that he might come if he was well.

Justice Bandial observed that rules were rules and had to be followed and adjourned the proceedings till Tuesday.

In the fresh application, Justice Isa requested the apex court to order the Pakistan Electronic Media Regulatory Authority (Pemra) to issue written instructions to all private channels that they cannot be restrained in any manner whatsoever from broadcasting the proceedings or live streaming of the court proceedings.

Justice Isa said the request had been made in the best interest of justice, highlighting that court proceedings are broadcast in a number of countries.