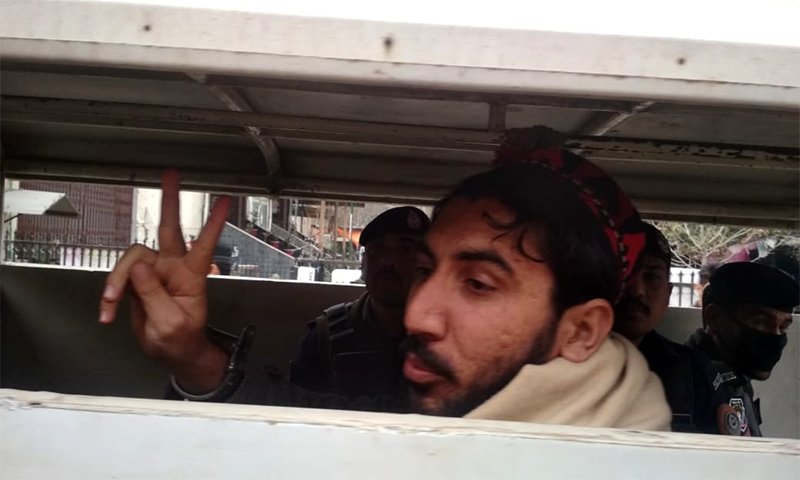 An anti-terrorism court in Karachi on Wednesday declared Pashtun Tahaffuz Movement (PTM) chief Manzoor Pashteen, MNA Mohsin Dawar and two others proclaimed offenders in a case related to sedition and the usage of provocative language against state institutions during a rally in Karachi.

Police had booked Pashteen and several of the party’s leaders — including Dawar, MNA Ali Wazir, Muhammad Shafi and Hidayatullah Pashteen — for sedition, inciting the public to wage war against the state and using derogatory language against security forces at a rally held in Sohrab Goth on December 6, 2020.

During today’s hearing, detained MNA Ali Wazir was produced before the court while the others appeared on bail. ATC-XII judge is conducting the trial in the judicial complex inside the central prison.

At the outset of the hearing, the investigating officer submitted a report stating that efforts were made to arrest the absconding suspects — Pashteen, Dawar, Shafi Hidayatullah — in compliance with the court’s directives but they could not be traced.

He added that the process of proclamation under the Section 87 (proclamation of person absconding) of the Criminal Code of Procedure (CrPC) had been completed and there was no likelihood of the arrest of the suspects in the near future.

Meanwhile, the revenue officers of Karachi’s Baldia and Saddar sub-divisions as well as the deputy commissioners of Peshawar and South Waziristan filed their reports regarding the process of attaching moveable or immovable properties owned by the four PTM leaders.

The revenue officers stated that the process to trace their properties, as required under Section 88 of the CrPC, had been completed during which it was discovered that none of them owned any property in Karachi, Peshawar and South Waziristan.

In light of the report submitted by the investigating officer, the judge ordered that the accused be declared proclaimed offenders in the case.

He directed the office to keep the case against the proclaimed offenders dormant till their arrest or surrender. The judge also took the reports of the revenue officers on record.

Earlier in June, the court had directed initiation of the process of proclamation and attachment of the suspects’ properties after the investigating officer had declared the four men as untraceable.

According to the prosecution, the PTM leaders had addressed a public gathering of around 2,000 participants at Sohrab Goth on December 6, 2020 in which they had allegedly incited the public against the state and used derogatory language against security forces.

Police had arrested Wazir in Peshawar in connection with the case on the request of the Sindh police and had flown him to Karachi.

In the charge-sheet filed earlier, the investigating officer had mentioned that under the purview of the investigation, the nominated suspects were found to be involved in committing offences punishable under sections 120-B (punishment of criminal conspiracy), 121 (waging or attempting to wage war or abetting waging of war against Pakistan), 121-A (conspiracy to commit offences punishable under Section 121), 124-A (sedition), 153 (wantonly giving provocation with intent to cause riot), 153-A (promoting enmity between different groups, etc), 505 (statements conducing to public mischief), 506 (punishment for criminal intimidation), 188 (disobedience to order duly promulgated by public servant) and 34 (common intention) of the Pakistan Penal Code read with section 7 of the Anti-Terrorism Act.