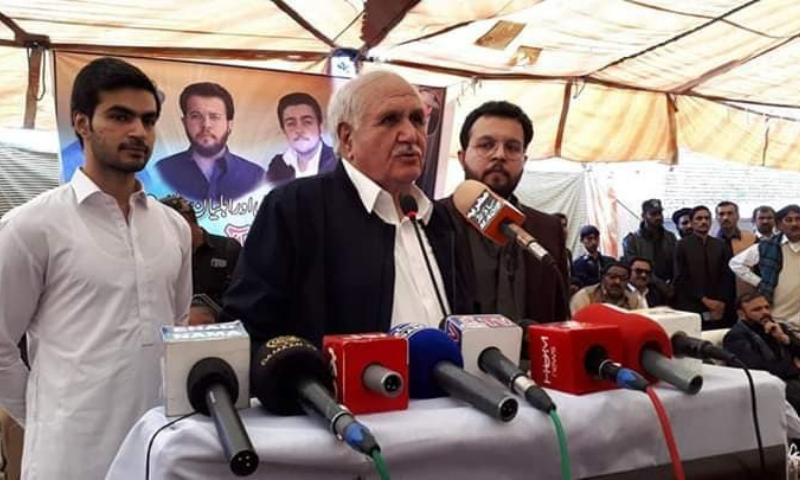 PESHAWAR: The opposition Pakistan Muslim League-Nawaz’s victory in the Nowshera by-election soured the ruling Pakistan Tehreek-i-Insaf’s celebrations to mark the winning of the National Assembly seat in Kurram tribal district, leading to the expulsion of the brother of defence minister Pervez Khattak from the provincial cabinet on Saturday.

In Nowshera, PML-N’s Ikhtaiar Wali defeated PTI candidate Omar Kakakhel with a margin of over 4,000 votes.

The Khyber Pakhtunkhwa government acted within hours of the PTI’s defeat in PK-63 by-polls and sacked irrigation minister Liaqat Khattak on Saturday evening for supporting PML-N candidate in the polls.

Mr Liaqat, younger brother of defence minister Pervez Khattak, was at odds with his elder brother and ruling PTI over the denial of PK-63 election ticket to his son, Ahad Khattak, for several months.

A notification issued by the administration department said the governor, in exercise of powers conferred under Clause 3 of Article 132 of the Constitution read with Clause Q of Article 105 had de-notified Liaqat Khattak as the irrigation minister.

“On his [Liaqat’s] de-notification from his respective office, he has ceased to hold the portfolio of the provincial minister with an immediate effect,” it read.

In a video message, spokesman for the provincial government Kamran Khan Bangash said Chief Minister Mahmood Khan had sought a report regarding Mr Liaqat’s support to the PML-N in the PK-63 by-polls.

He said the report established that Mr Liaqat and his family had campaigned against the PTI candidate.

The spokesman said Prime Minister Imran Khan was consulted on the matter and after his approval, Mr Liaqat was sacked from the provincial cabinet.

However, PTI information secretary Najiullah Khattak ruled out any immediate disciplinary action against Mr Liaqat for his actions.

He told Dawn that such a decision would be taken by the party after thoroughly reviewing the situation, which would take a bit of time.

The reports of bad blood in the Khattak clan had been doing the rounds for several months and they’re fuelled by the denial of PK-63 ticket to Mr Liaqat’s son, Ahad Khattak.

Mr Pervez preferred Mr Kakakhel’s son, Mian Omar, over his nephew, Ahad Khattak, for by-polls leading to bickering in the family, which led to the ultimate battering of Mr Pervez’s image of invincibility in Nowshera politics, which he had grown so used to boast of late.

“Even a dry piece of wood would win if I support it for elections,” Mr Khattak had claimed in a last month public meeting in Nowshera.

Mr Khattak’s outburst in a Nowshera public meeting that took the social and mainstream media by storm was also apparently meant for his younger brother.

In the speech, he was heard saying that Prime Minister Imran Khan’s government would not be there even for a day if he caused some trouble.

Earlier in the current month, Mr Liaqat also, addressing a public meeting, called himself a powerless minister and said he would tell the premier about who was managing his department.

In Oct last year, both Khattak brothers had briefly reconciled after Mr Liaqat visited his elder brother’s office due to the jirga efforts to patch up things after an armed clash between their supporters left a supporter of Mr Pervez dead in Nawan Killi area of Nowshera Kalan.

The slain supporter, Khurshid Thekadar, was set to arrange a public meeting for Mr Pervez but he was killed. Though both brothers hugged each other on that occasion, the embrace failed to cool down simmering differences in the clan.

Sources said Ahad Khattak, who had previously served as Nowshera tehsil’s nazim, was backed up by a large number of nazims and councillors from the area for his bid for the provincial assembly’s ticket.

After the denial of the PTI nomination to him, they formed the ‘Councillor Ittehad’ supported by more than 180 councillors and nazims. The alliance openly supported the PML-N candidate’s bid for PK-63 seat.