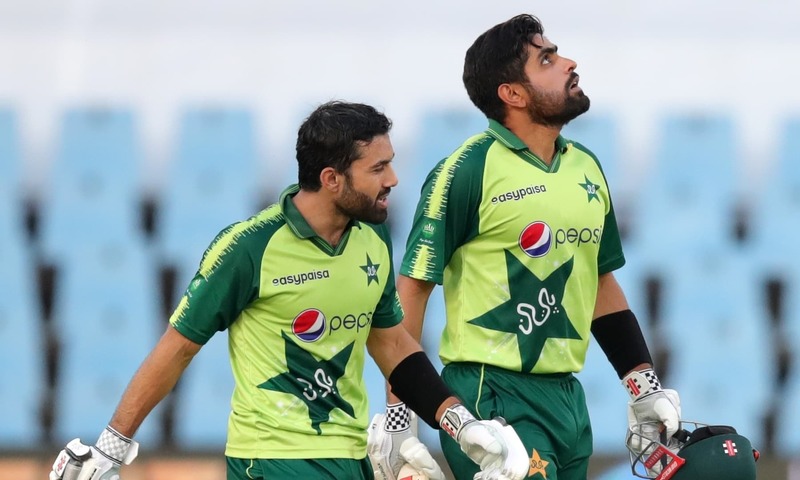 Pakistan captain Babar Azam blasted a superb century to lead Pakistan to a win against South Africa by nine wickets in the third Twenty20 international at SuperSport Park in Centurion on Wednesday.

Pakistan, who were chasing a sizeable target of 204 set by South Africa, finished at 205-1 with a full two overs in hand. Azam’s 122 runs partnered with Mohammad Rizwan’s unbeaten 73 runs brought crickets fans to their feet in applause.

According to sports reporter Faizan Lakhani, this was Pakistan’s highest partnership for any wicket in T20Is.

“Previous was 143* for 2nd wicket by Mohammad Hafeez and Ahmed Shahzad vs Zimbabwe in 2013. Also the highest opening wicket partnership against South Africa, previous was 145 by Gayle & Smith,” he tweeted.

“This is another example of why Pakistan should always chase in T20Is if they win the toss,” said sports writer Rehanul Haq. “When they know the target, no room to think about attacking approach or conservative, the total decides that for you. Plus recent NT20 cups + PSL has prepared these guys for planning big chases.”

Azam, who became the No.1-ranked ODI batsman earlier today — ending India captain Virat Kohli’s 41-month reign at the top of the charts — made 122 runs off 59 balls in a magical innings that ended when he was caught out in the 18th over.

Read: Twitter has a field day with memes as it crowns Babar Azam world’s #1 ODI batsman

By doing so, he became the third Pakistani batsman to score a T20I 100.

Not just that, according to sports journalist Saj Sadiq, Azam’s century today came up in 49 balls “which is the fastest century in T20Is by a Pakistani batsman”.

Cricketers, including Shoaib Akhtar and Shadab Khan, were among those singing Azam’s praises.

Sports journalist Roha Nadeem also gave credit to the coach, saying “say what you want about the current management, decisions like these are why Misbah’s running the show”.