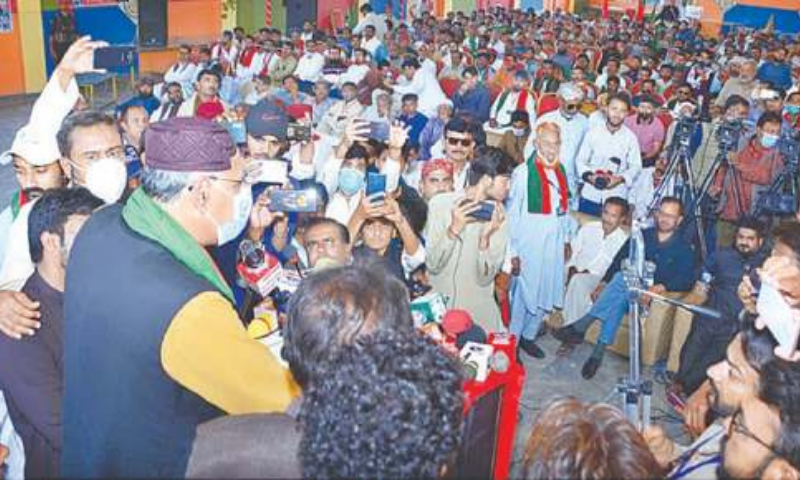 HYDERABAD: Federal Minis­ter for Planning, Deve­lopment and Special Initiatives Asad Umar said on Saturday that the prime minister would announce a massive development package for other parts of Sindh, like Karachi, once it was finalised by the end of April.

He said despite the 18th Amendment and a little increase in provincial revenues, the provinces were still almost totally dependent on federal funds.

He was talking to journalists in Wapda Colony after chairing a meeting of officers of different federal government departments. Muttahida Qaumi Movement-Pakistan parliamentarians Salahuddin, Sabir Kaimkhani, Rashid Khilji, Nasir Qureshi and Nadeem Siddiqui and the Pakistan Tehreek-i-Insaf’s Firduous Shamim Naqvi were present on the occasion.

He said if the people of Sindh didn’t accept Sindh barrage conceived by Wapda why would the federal government spend billions on it.

He said the federal government would consult the Sindh government over the development package through the Execu­tive Committee of National Economic Council (Ecnec), which was a relevant forum to discuss such projects.

Asad Umar says despite increase in their revenue, provinces are still dependent on federal funds

He said a meeting of the Cou­ncil of Common Interests (CCI) had to be postponed in view of increasing political temperatures because of Senate polls.

He said he saw no threat to the PTI-led coalition government, adding that since 2019 he was tired of hearing that the PTI was in trouble

Mr Umar said circumstances showed how ugly Senate elections had become as “conscience is being sold by many”. He said the PTI was a democratic party in which people expressed dissenting views on award of party tickets for Senate seats but they were loyal with the party and stood by its decisions.

He said Liaquat Jatoi, a PTI leader from Sindh who has raised questions over award of party ticket to Saifullah Abro, had been asked to explain his point of view.

Mr Umar denied there were differences between PTI and MQM.

He said the seats the PTI lost, including one in Khyber Pakhtunkhwa, in recent by-elections were discussed in media. But no one discussed the seat which the PTI had lost in 2018 and won in recent by-polls. Wazirabad seat was won by PML-N with a margin of over 30,000 votes in 2018 which, the party alleged, were massively rigged. However, this time, the PML-N won it with 5,000 lead with no rigging allegations. He said the by-polls showed that the ratio of the PTI’s vote had increased while PML-N’s declined.

He said leader of opposition in Sindh Assembly Haleem Adil Sheikh was being subjected to vindictive actions for raising voice against the Sindh government, Murad Ali Shah and Asif Ali Zardari. He said PPP’s vote bank driven by love for the Bhuttos had reduced and largely became a ‘vote of fear’.

Loadshedding was also related to breakdowns in the fragile distribution network which needed upgradation, he added.

Under an Asian Development Bank-funded programme, smart meter project was going to be introduced so that only those consumers faced action who did not pay bills instead of their entire area suffering power cut.

He said an identical project of smart meters is part of the China Pakistan Economic Corridor to be approved in coming meeting of Pakistan-China Joint Cooperation Committee.

Mr Umar said a CCI meeting would be held after Senate polls. “We felt perhaps time is not ripe now for discussing constructive matters in the CCI.”

He said the prime minister frequently gave time to the Sindh chief minister and listened to him attentively.

He said the Sindh government had no objection to execution of K-IV project by the federal government and had given its consent for it. Now Wapda would be its implementation agency and it would spend whatever amount of fund was needed on its completion.

Mr Umar said the idea behind devolving powers to the provinces under 18th Amendment was that they would increase revenue generation and would not rely on Centre. “Unfortunately, it hasn’t happened. The provinces have increased their revenues but only a little. Still, they completely rely on Centre for receipt of funds.” He said the Federal Board of Revenue had exceeded its revenue collection target this year.

Wind energy projects, he said, would be approved through auction and the federal government had designed three categories for them, irrespective of their provincial location.

He said earlier wind power projects were approved through a flawed policy and now the projects in category I and II were given go ahead while those in category-III were dropped regardless of their location.