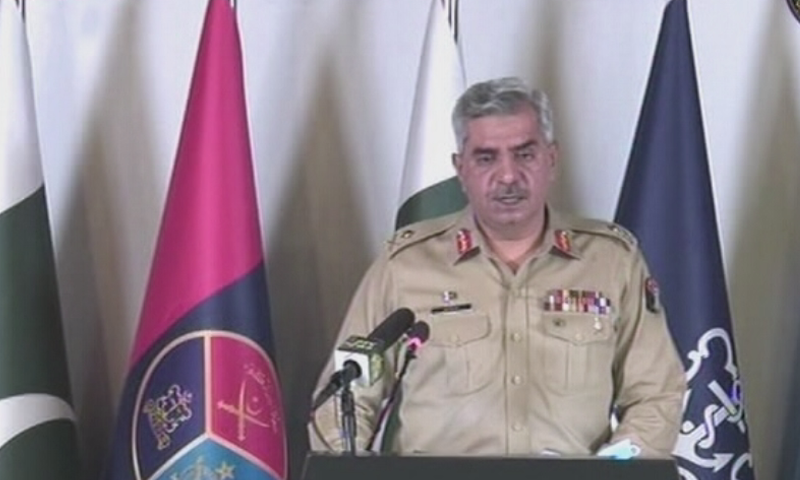 Maj Gen Babar Iftikhar, director general of the Inter-Services Public Relations (ISPR), on Thursday termed as “disappointing” and “misleading” any attempt to link the release of Indian pilot Wing Commander Abhinandan Varthaman with anything other than Pakistan’s mature response as a responsible state.

Although the chief of the military’s media wing did not name anyone, his statement comes a day after former National Assembly speaker and senior PML-N leader Sardar Ayaz Sadiq suggested that the PTI government had released Abhinandan in capitulation, fearing an imminent attack from India.

After his comments sparked a social media storm, Sadiq on Thursday issued a clarification, saying his remarks were being “misquoted and misreported”.

Addressing a press conference with a one-point agenda, the DG ISPR said he sought to “correct the record” regarding the events that surrounded India’s violation of Pakistani airspace last year in February.

“A statement was given yesterday which tried to distort the history of issues associated with national security,” he said.

The DG ISPR said following the attack on Indian troops in occupied Kashmir’s Pulwama area, India “showed aggression against Pakistan in violation of all international laws on February 26, 2019, in which not only did it face defeat but was humiliated around the world”.

“Pakistani armed forces’ alert and timely response foiled the enemy’s designs. The enemy planes that had come to drop the explosives on the Pakistani people escaped while dropping their payload on empty mountains in panic after seeing our Shaheens.”

He said the Pakistani forces “decided to teach the enemy a lesson in response” to the attack and country’s entire civil and military leadership was united in the decision.

“Pakistan responded to India in broad daylight after announcing it. Not only did we give an appropriate reply, but also shot down two enemy war planes [and] Wing Commander Abhinandan was captured.

Timeline: Events leading up to the Feb 2019 Pak-India aerial combat

“During these actions, the enemy became so frightened that it shot down its own helicopter and troops in a state of panic. […] This victory not only exposed India’s hollow claims of power before the world but made the entire Pakistani nation proud,” he said.

The ISPR chief said Pakistan’s victory was “not only acknowledged by the world” but the Indian leadership had attributed their forces’ failure to the absence of Rafale fighter jets.

“Being a responsible state, the Government of Pakistan in order to give peace another chance decided to release Indian prisoner of war Wing Commander Abhinandan,” he added, emphasising that this decision, which was in line with the Geneva Convention, was praised the world over.

“I want to make it clear once again for the sake of record that Pakistan first showed its capability and resolve and this decision was taken keeping in view all warfare options from a position of strength. Pakistan’s leadership and the armed forces were fully prepared to deal with any situation.

“We gave them a bloody nose and it is still hurting,” he said while referring to Pakistan’s response to India’s violation of its airspace.

“It is extremely disappointing and misleading to link Wing Commander Abhinandan’s release with anything other than a responsible state’s mature response.

“This is in fact equivalent to making controversial the Pakistani nation’s clear supremacy and victory over India, and I think this is not acceptable to any Pakistani.”

Maj Gen Iftikhar said such “negative narrative directly affects national security and the enemy is taking thorough advantage of these things in the information domain and you all can see a glimpse of this in the Indian media”.

“This same narrative is being used to minimise India’s defeat and loss,” he continued. “In these conditions, when enemy forces have imposed a hybrid war on Pakistan, we will all have to move forward with great responsibility.”

He said the Pakistan Army “is keeping a close eye on the regional security situation and is not only aware of internal and external threats but is also ready to counter all kinds of challenges”.

“With the nation’s help, we will foil every conspiracy against Pakistan and give proportionate response to any aggression,” he added.

“No difference can be created between the leadership and rank and file of the armed forces. There is a unity and it will remain.”

‘No attack was imminent’

Abhinandan was captured in February 2019 after his plane was shot down by the Pakistan Air Force (PAF) after it violated Pakistani airspace in a serious escalation of hostilities between India and Pakistan.

A day after his capture, Prime Minister Imran Khan had announced that the pilot would be released as a “gesture of peace” to India.

On Wednesday, former speaker Sadiq claimed on the floor of the National Assembly that the government had ‘pleaded’ to parliamentary leaders to let Abhinandan be freed.

“I remember [Foreign Minister] Shah Mahmood Qureshi sahib was present in that meeting, which the prime minister had refused to attend. The chief of army staff also attended,” Sadiq had said while responding to federal minister Murad Saeed.

“With his legs shaking and sweat on the forehead, Foreign Minister Shah Mahmood Qureshi said to us, ‘For God’s sake, let him (Abhinandan) go back now’,” he had claimed, adding “no attack was imminent; they only wanted to capitulate and send Abhinandan back”.

As his comments went viral on social media and were picked up by Indian television channels, Sadiq issued a clarification on Thursday, saying the tweets and Indian media reports were “totally contrary” to what he actually said in the parliament.

“Abhinandan had not come to Pakistan to distribute sweets; he had attacked Pakistan and it was a victory for Pakistan when his plane was shot down,” he said in a video message.

Sadiq said Prime Minister Imran had called a meeting of parliamentary leaders on the issue but “could not dare” to attend the meeting because he was very anxious. “He did not share with us on whose instruction he was doing this and what pressure he was under because he did not attend the meeting,” he alleged.

Sadiq said upon Qureshi’s request, the civil leadership decided to release the Indian pilot for the sake of “national interest”.

“We did not agree with the decision. There was no rush to return Abhinandan; you could have waited a little. But it was done in the national interest. But Imran Khan’s decision betrayed weakness of the civil leadership.”

“I did not expect Ayaz Sadiq to say such a thing,” he said, adding that the parliament had been taken into confidence over the intelligence information received regarding tensions with India. This information did not involve Abhinandan, Qureshi said.

“Such irresponsible statements are being given only to gain political mileage,” he said, accusing the opposition of “misleading” the nation regarding Abhinandan and Indian spy Kulbhushan Jadhav.

“We don’t want to give India a chance to take Pakistan to the International Court of Justice again,” he added.

Qureshi said no Pakistani would be willing to “bargain” on the issue of Kashmir. “We unify the nation on Kashmir and they try to peddle India’s narrative,” he added, referring to the opposition.

“An attempt is being made to make the issue of Abhinandan controversial for no reason.”

‘Pakistan wants peace in the region’

At a weekly press briefing, Foreign Office spokesperson Zahid Hafeez Chaudhri reiterated that Pakistan had released Abhinandan as a gesture of peace and ruled out any pressure in this regard, Radio Pakistan reported.

“Pakistan wants peace and stability in the region and release of [the] Indian pilot manifests this resolve,” he said in response to a question.

Chaudhry, however, emphasised that Pakistan was fully prepared and capable to take “firm action against any misadventure” by any country.

He said Pakistan’s successful downing of Indian planes last year reflected the level of preparedness of its armed forces against any external threat directed at the country.

With additional reporting by Amir Wasim in Islamabad.