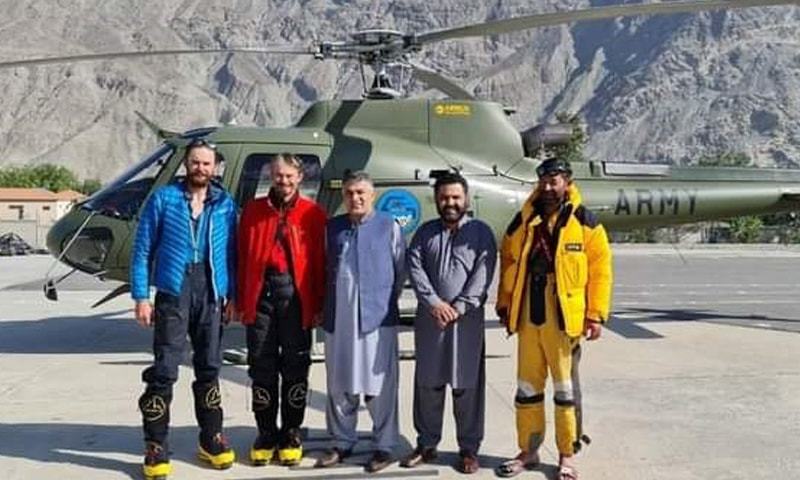 A trio of mountaineers stranded in Camp III of 7,788-metre-high Rakaposhi after summitting the peak last week were on Wednesday rescued and moved to Gilgit, according to Nagar Deputy Commissioner (DC) Zulqarnain Haider.

The DC said the three climbers — a local mountaineer named Wajidullah Nagri and Jakub Vicek and Peter Macek of the Czech Republic — were rescued with the help of an army helicopter from a spot located at a height of 6,000 metres. He added that the mountaineers were sent to Gilgit via an army helicopter at around 9am on Wednesday.

Haider said the mountaineers were welcomed by government officials and politicians upon their arrival in Gilgit.

Meanwhile, the Gilgit-Baltistan government has decided to look into the possibility of taking legal action against the Czech mountaineers and their tour operator, according to a letter written from the region’s tourism department to the GB assistant inspector general of police (Operation) and the assistant tourism director for Nagar.

Alpine Club of Pakistan (ACP) Secretary Karrar Haidri had told Dawn that the two Czech mountaineers had summited the peak without obtaining the required permits.

The letter dated Sept 9, a copy of which is available with Dawn.com, said the two foreigners had applied for a permit to summit Rakaposhi on July 16 but the permission was not granted due to “security concerns”.

It added that it came to be known through social media that the mountaineers summitted the peak without obtaining the permit from the concerned department.

“It is therefore requested to submit a detailed report within 24 hours so that action could be taken against the tour operator and individuals [who] violated mountaineering rules,” the letter reads, stressing that the matter should be dealt with “urgently”.

The trio of climbers had begun the ascent of Rakaposhi, one of the world’s most challenging peaks, on September 1 from the South Ridge and had reached the top on September 9. They had begun their descent the same day, the DC had earlier told Dawn, and had subsequently become stuck.

A rescue operation was then launched to retrieve them but had to be suspended midway on September 12 due to rough weather. It was later resumed, while the climbers were said to be in touch with their families through satellite communication.

Rakaposhi is the world’s 27th and Pakistan’s 12th highest peak, and Nagri, 41, is the second Pakistani to climb it. Colonel Sher Khan was the first Pakistani to scale it in 1979.