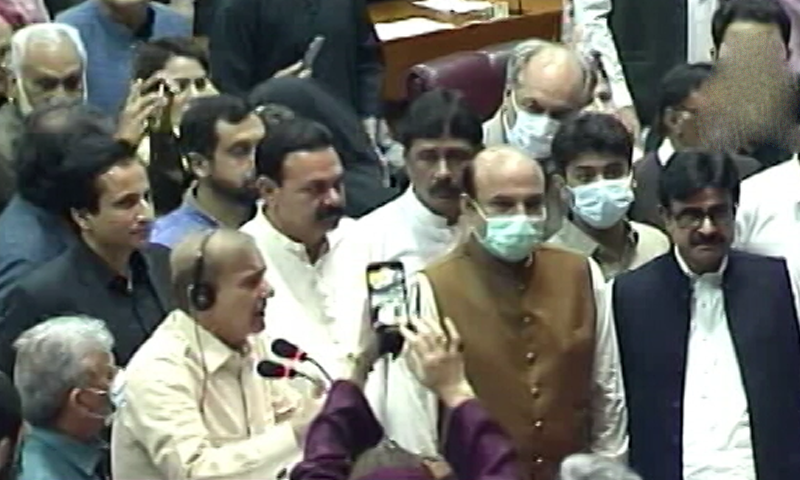 The National Assembly witnessed a rumpus on Tuesday as lawmakers from the treasury and opposition benches nearly came to blows and hurled objects at each other.

The mayhem began as opposition leader Shehbaz Sharif attempted to speak, for a second day, during the general debate on federal budget 2021-22.

Videos widely shared on social media showed PTI’s Ali Awan shouting expletives at a member of the opposition and tossing a book at his rival, who hurled it back at him.

Later, budget books were seen flying across the National Assembly hall as lawmakers from both sides attempted to hit each other with full force.

“Today the whole nation saw on their TV screens how the ruling party resorted to hooliganism & even naked abuse. Only goes to show how ethically shallow Imran Khan and his whole party are and how PTI has turned into a fascist and abusive party. Unfortunate!” tweeted Sharif after the session.

“This is the reality of the ‘Naya Pakistan’ Imran Khan has created. This is a reflection of his fascist mindset,” she tweeted. “He will leave no stone unturned to paralyse [the] parliament and weaken democracy. Throwing budget books at the opposition. This is Imran Khan’s ‘Riyaasat-e-Madina’.”

Members of the government, however, held the opposition responsible for the ruckus.

Defending his conduct, PTI’s Awan said although his video of swearing had gone viral on social media, it was the opposition members who had crossed the line first.

He shared another video showing opposition members shouting anti-government slogans, and wrote: “PML-N members resorted to swearing first and shoved our members; my reaction was a response to their actions. It is important to see both sides of the picture.”

Information Minister Fawad Chaudhry said the “fighting” started with slogans raised by PML-N MNA Ali Gohar Khan. “PML-N MNAs uttered naked expletives by shunning all parliamentary values which made some young MNAs emotional and then the hurling of budget books started,” he tweeted.

Chaudhry also said PTI MNA Maleeka Bokhari was struck by a book thrown by PML-N lawmakers which had injured her eye.

Commenting on the pandemonium, MNA Mohsin Dawar said “today was one of the lowest points of Pakistan’s parliamentary history.”

“Democracy and parliament were defaced under instructions of those who selected the unworthy into the parliament,” he tweeted.

Similar scenes were witnessed in the lower house on Monday when, in an unprecedented move, treasury members stopped the opposition leader from opening up the general debate on the budget, declaring that the government would not allow him and PPP chairman Bilawal Bhutto-Zardari to speak without first having a ‘written guarantee’ that they would hear speeches of Prime Minister Imran Khan and ministers silently.

The treasury members, including Foreign Minister Shah Mahmood Qureshi and some other ministers, stood up and started thumping the desks and raising slogans of ‘Chor, Chor’ (thief, thief) as soon as Speaker Asad Qaiser gave the floor to the opposition leader to open up the general debate on the federal budget 2021-22 that was presented by Finance Minister Shaukat Tarin on June 11 amid a similar noisy protest by the opposition.