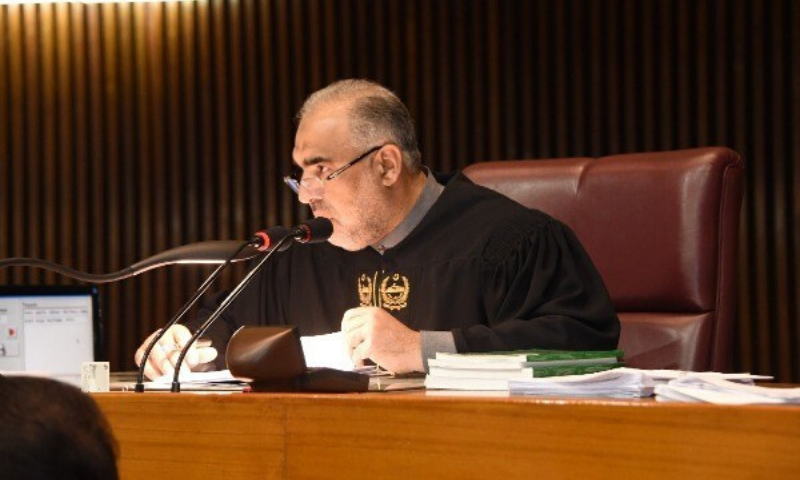 ISLAMABAD: It was almost two weeks after the decision of the Balochistan National Party-Mengal (BNP-M) to quit the ruling coalition and failure of a government team to woo the party head Sardar Akhtar Mengal that National Assembly Speaker Asad Qaiser on Saturday finally revived a dormant special committee on the Balochistan issues which he had constituted some four months ago.

BNP-M MNA Agha Hassan Baloch represented party chief Akhtar Mengal in the maiden meeting of the Special Parliamentary Committee on Balochistan which was held at the Parliament House and presided over by the speaker himself.

According to a handout issued by the National Assembly Secretariat after the meeting, the members of the committee decided to form a four-member sub-committee under the convenership of Minister for Inter-Provincial Coordination Dr Fehmida Mirza to prepare “comprehensive terms of reference (ToR), encompassing all the issues relating to Balochistan”.

It was also decided that a representative of the BNP-M and Defence Minister Prevez Khattak, who is the head of the government negotiating team, would be especially invited to assist the sub-committee while it developed the ToR.

Representing the BNP chief Akhtar Mengal, MNA Hassan Baloch contended that the Balochistan issues had been getting intense since 2006 and needed to be addressed forthwith. He suggested examining the recommendations formulated by the parliamentary committee headed by Chaudhry Shujaat Hussain after meeting Nawab Akbar Bugti.

Bilawal talks to Mengal on phone

He suggested that the committee looked into the issue of missing persons besides meeting with their families to hear their grievances, especially in Baloch dominating districts. He said the BNP also demanded that the details of the China Pakistan Economic Corridor (CPEC) projects in Balochistan should be made public.

The Pakistan Tehreek-i-Insaf (PTI) government had suffered a setback on June 17 when the BNP-M announced its decision to quit the ruling coalition at the centre ahead of the vote on the federal budget, putting the ruling party at the mercy of six other smaller allies due to its fragile majority in the National Assembly.

The decision had been announced by BNP-M chief Akhtar Mengal on the floor of the National Assembly while taking part in general debate on the budget.

Mr Mengal had accused the PTI of having a “non-serious attitude” towards Balochistan problems and complained about its failure to implement two agreements reached with his party at the time of the formation of the government soon after the general elections in 2018.

The BNP-M and the PTI had signed a six-point memorandum of understanding in August 2018 for an alliance at the centre. The six points were: recovery of missing persons, implementation of the National Action Plan on terrorism, observance of six per cent job quota for Balochistan in federal government departments, immediate repatriation of Afghan refugees and construction of dams in the province to resolve acute water crisis.

Speaking at the parliamentary committee meeting, NA Speaker Asad Qaiser said the parliament and public representatives were the best option to put forth the solution of the socio-economic issues faced by Balochistan and its people.

The speaker said Balochistan and its issues had always been the top priority of the government which resolved that Pakistan’s development and its progress was attached with peace and progress of the province.

He said issuance of an executive order regarding immediate implementation of Balochistan’s six per cent employment quota in federal departments expressed the seriousness of Prime Minister Imran Khan for addressing the issues of Balochistan.

The speaker said the CPEC emanated from Gilgit-Baltistan and culminated in Balochistan increasing significance of the province, therefore, ensuring transfer of the real benefits of CPEC to the local people needed to be looked into by the parliamentary committee.

Deputy Speaker Qasim Suri, who is also a member of the committee and belongs to Balochistan, said that the government was seriously looking into the resolution of issues confronting peace and development in the province.

IPC Minister Dr Fehmida Mirza said Balochistan and resolution of its issues had always been the top priority of the parliamentarians across the country. She pointed out that comprehensive TOR were essential to make this committee more effective.

Pervez Khattak said that the government had taken various steps for mitigating the grievances of the people of Balochistan and assured continuation of that resolve in future too.

Other members of the special committee on Balochistan include Aslam Bhootani, Sabir Kaimkhani and Ehsanullah Reiki.

The members of the special committee stressed that the parliament should play its role in resolution of the genuine issues of the province rotting since decades. They said that the CPEC was undoubtedly a game changer for Pakistan and Balochistan, thus government should ensure deliverance of their right to the people of the province. They expressed confidence that the committee under the stewardship of the speaker would take the lead.

In a related development, Pakistan Peoples Party (PPP) chairman Bilawal Bhutto-Zardari on Saturday talked to BNP-M chief Sardar Akhtar Mengal over telephone. Besides discussing the current political situation in the country, Mr Bhutto-Zardari discussed his plan of convening a multi-party conference (MPC) of the opposition parties next week with Mr Mengal.

According to a statement issued by the PPP Media Centre, Mr Bhutto- Zardari while talking to the BNP-M chief said the present budget was harmed the interests of the people and therefore it could not be accepted.

“(Prime Minister) Imran Khan is attacking the constitution of Pakistan by criticising the 18th Constitution Amendment. The Covid-19 pandemic has spread everywhere in the country due to the incapability of Imran Khan and his government,” the PPP chairman was quoted to have told Mr Mengal.

Both the leaders expressed concern over the spread of Covid-19.

They also talked about the government’s actions with regard to the National Finance Commission award and the MPC scheduled for next week.

Both the leaders also rejected the petroleum price increase and said this was the time to provide maximum relief to the people.

Mr Bhutto-Zardari said the “selected” had no compassion for the poor people of the country. People did not get the benefit of decrease in petroleum prices due to shortage of oil in the market but now the increase of petroleum prices would further increase inflation, he said.

“Every day of this selected prime minister is increasing the problems for them,” the PPP chairman concluded.