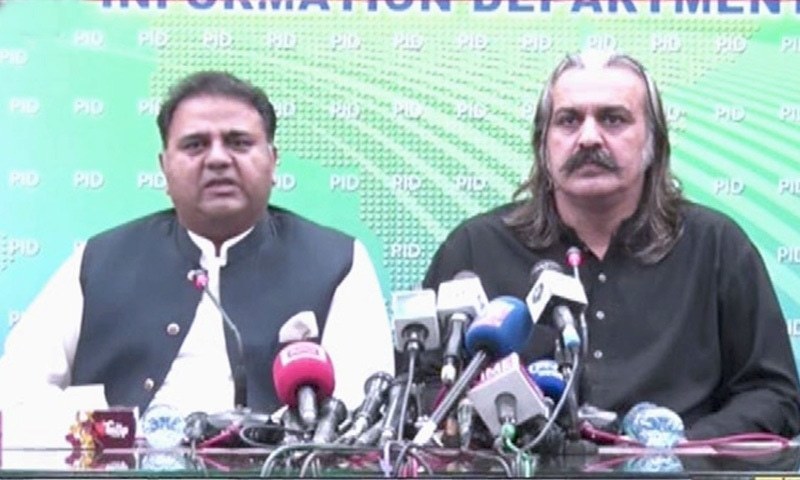 Federal Minister for Information and Broadcasting Fawad Chaudhry on Monday said that the recent meeting of PML-N supremo Nawaz Sharif with Afghan National Security Adviser Hamdullah Mohib was one of the major factors behind the party’s “humiliating defeat” in the Azad Jammu and Kashmir (AJK) general elections.

The Pakistan Tehreek-i-Insaf, according to unofficial results, clinched majority seats in the AJK general elections held on Sunday and is likely to form the next government in the region.

“The meeting of Nawaz Sharif with RAW agent Hamdullah Mohib was felt by the Kashmiris and it reflected in the election results,” the minister said at a press conference in Islamabad.

He said it was surprising that the PML-N had not given any clarification about whether Nawaz met the Afghan NSA with the party’s permission.

Chaudhry, flanked by federal Minister for Kashmir Affairs Ali Amin Gandapur, said it was strange of the PML-N to expect victory in the AJK elections and win the confidence of Kashmiris, especially when their leaders were meeting Indian officials.

Chaudhry said the PML-N and PPP must immediately demand resignation from Maryam Nawaz and Bilawal Bhutto-Zardari over the parties’ AJK election defeat. “They have no grounds to remain chairpersons of their parties after their humiliating defeat in the polls,” he added.

The minister said the claims of rigging were meaningless given the huge magnitude of the victory PTI had bagged. “Such triumphs are only possible when you have public support, and it stands proven that people of Kashmir have trust in us,” he stressed.

He claimed that the PPP would also be wiped out from Sindh in the 2023 general elections. “This is their last tenure, especially in the wake of their below-par performance,” he said.

He pressed upon the rival parties to bring in new leadership.

Chaudhry also regretted a statement by a PML-N candidate about seeking India’s help, saying it was “shameful”. “The PML-N was in power in AJK and it faced a defeat because of its policies,” he added.

He said India desired to have dialogue with Pakistan, and “we also wish to improve our ties as it benefits people on both sides. But there is a condition that India withdraw its order of Aug 5, 2019, [in occupied Kashmir].”

The minister said Prime Minister Imran Khan, since he assumed power, had left no stone unturned in highlighting the Kashmir issue at all forums. “On the contrary, the speeches of Maryam and Bilawal were entirely based on Imran-bashing,” he remarked

This was the difference of narratives that earned the PTI a convincing victory, he said. He added that the prime minister would now decide about nominees for the AJK prime minister and speaker of the legislative assembly.

In his remarks, Gandapur said the AJK prime minister, president and the assembly should have a big role in occupied Kashmir diplomacy, “but our previous rulers didn’t play any role”. He said Prime Minister Imran would unveil a clear policy on the matter and also bring elected leaders to the front to lead.

To a question, he said the PTI had made commitment for a technocrat seat with just one person, adding that the party would abide by it. He further said the commitment was made with the premier’s permission.

The minister also expressed reservations over the AJK election commission’s decision against him. “My comments were not stronger than that of Bilawal and Maryam,” he said, adding that his lawyer would appear before the election commission to contest the case.

Meanwhile, Prime Minister Imran thanked the people of AJK for voting his party into power in the general elections and placing trust in it.

The premier also vowed to keep raising his voice for the Kashmir cause on all international forums.