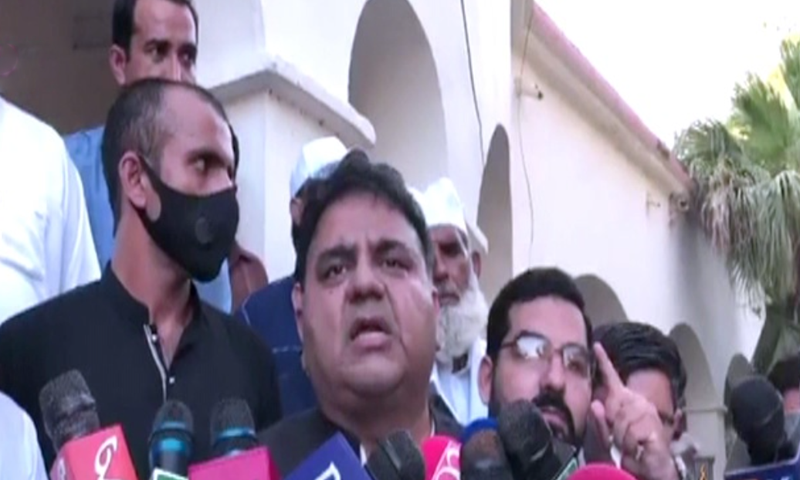 Talking to the media in Jhelum, Chaudhry said: “Today Nawaz Sharif and Ashraf Ghani are spending the same kind of life because when you’re not connected with the soil then you spend the kind of life as they are — one is lying in London and the other in Dubai.

“Both have gone abroad with bags full of dollars so this is a misfortune [and] lesson for those people who are in politics but are not connected to their land. Today the condition of such people is before us.”

The information minister continued his criticism of the PML-N supremo, saying that his response to the arrest of Indian spy Kulbhushan Jadhav was inadequate.

“You can guess how shameless people have been rulers in Pakistan who did not have the ability to look beyond their own feet except for accumulating money and inviting Narendra Modi to weddings — apart from this they did no constructive work.”

In contrast, he said, Prime Minister Imran Khan represented the feelings of the nation on a host of issues from Afghanistan to the Kashmir dispute to environmental concerns and corruption in poor countries.

“The way [last] night he presented the Kashmir issue in the UN, the way he called out Narendra Modi, this has never happened before.”

The information minister said the only political party with a presence in all quarters and regions was the PTI, predicting that it would form the next government with a two-thirds majority.

He said the PPP and PML-N had “completely scattered” and could not find willing contestants for their tickets. Chaudhry claimed that PPP Chairman Bilawal Bhutto-Zardari had offered Rs50 million to people during his visit to South Punjab to contest from the PPP’s ticket while the PML-N was also subject to internal power struggles, according to him.

“You will see that this [next] election will be the last for the PML-N and the PPP and they won’t be in a position to contest. The PTI and Imran Khan are going to make the next government with a great majority.”