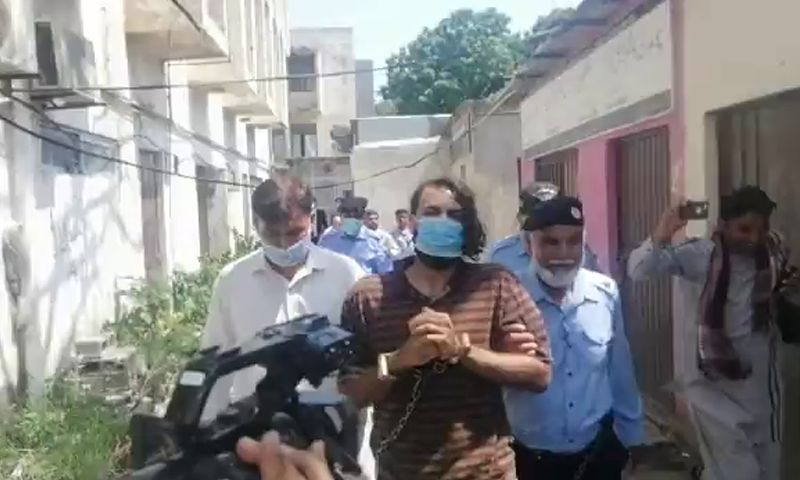 The suspect was initially sent on a three-day remand, which was later extended for two more days on July 24.

The court further extended the remand by three more days on Wednesday after Jaffer was produced before Judicial Magistrate Shoaib Akhtar.

At the hearing, case prosecutor Sajid Cheema told the court that CCTV footage of the incident had been acquired but was yet to be sent for forensic analysis.

He requested the court to grant another three-day remand of the suspect as he, along with the CCTV footage, had to be transported to Lahore for the forensic analysis of the video.

The counsel for the suspect, however, suggested that the relevant authorities use a photograph of Jaffer for forensic analysis and that a further remand for that purpose was not needed.

He added that police had also recovered the suspect’s mobile phone and now there were no grounds for extending his remand.

The prosecutor argued back that had a photograph sufficed for the forensic analysis, the request for a further extension of the remand would not have been made in the first place.

He said the suspect in the Usman Mirza case also had to be taken to Lahore as it was necessary to ensure that the footage was not edited.

At that, the counsel for the suspect pointed out that his client’s remand period had already been extended to seven days.

“Why wasn’t the forensic analysis carried out during that period?” he questioned.

He added that it was the first instance in his knowledge where a request for remand extension had been made to conduct forensic analysis of CCTV footage.

The prosecutor, however, insisted on a three-day extension of the remand.

“Grant a remand for just three days and we will send [Jaffer] to jail after that,” he said.

At that, Jaffer’s counsel argued that the suspect could be taken to Lahore directly from jail and there was no need to extend his physical remand.

The court, after hearing the arguments, granted the extension.

A first information report (FIR) was registered later the same day against Jaffer, who was arrested from the site of the murder, under Section 302 (premeditated murder) of the Pakistan Penal Code on the complaint of the victim’s father.