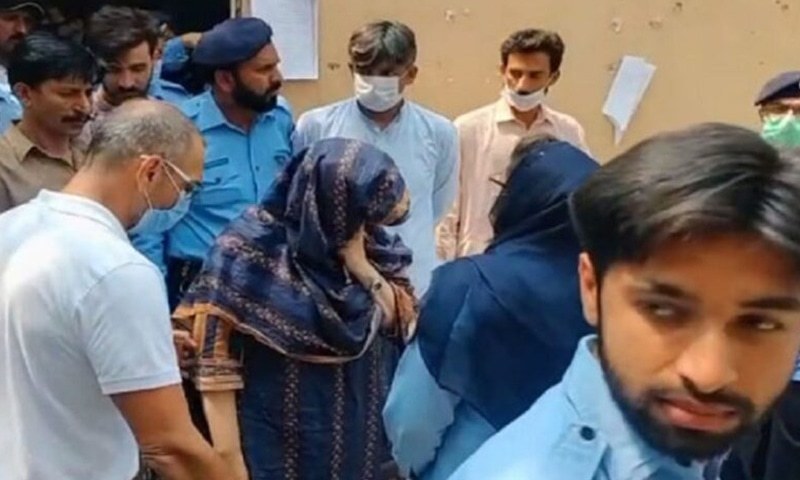 The Islamabad High Court on Thursday conducted a hearing on the bail petition of parents of Zahir Jaffer — the prime suspect in Noor Mukadam’s killing — with the defence counsel casting doubts on the police probe, saying it had “grey areas”.

Justice Amer Farooq Kayani heard the case in which Khawaja Haris, representing Zakir Jaffer and Asmat Adamjee, told the court that the police were solely relying on statements given by Zahir.

“Police didn’t speak to my clients ever since their remand was granted by the court,” he said.

Zahir’s parents were taken into custody on July 25 following the arrest of their son for allegedly concealing material facts from the investigation team. Subsequently, they had approached a district and sessions court for bail.

The sessions court had on Aug 5 dismissed the post-arrest bail applications of Zahir’s parents and observed that they had abetted the murder and had attempted to conceal material evidence.

The investigators, in a challan submitted to the sessions court on Sep 9, said Zahir had contacted his father, who was in Karachi, on the phone four times on the day of the incident on July 20 and the latter knew about Noor’s illegal detention and the situation at their home.

The challan said his parents never informed the police, and even after their son beheaded the girl, his father Zakir Jaffer tried to relax the murderer and told him: “You need not worry, I can handle this, I am sending people to rescue you and to dispose of the dead body.”

According to the investigation report of Islamabad police, later, Zakir had sent five Therapyworks employees to his residence, where they tried to conceal the crime and attempted to destroy the evidence.

In the case hearing today, the defence counsel pointed out that while it was admissible that suspect Zahir called his parents, “but it could not be said what was talked about during the conversation.”

He said it was also not clear whether Zahir had informed his parents about the murder. “Even if it is known, and Therapyworks employees went there to destroy the evidence, the case [against parents] is still not justified,” Haris told the court.

The counsel said police only sought a two-day physical remand of Zahir’s parents, adding that the investigators could have sought a longer remand had there been enough evidence against them.

“It is written in the police challan that Zahir Jaffer informed his parents after the murder and they sent Therapyworks employees to the spot,” he argued.

He said the murder couldn’t have been assisted if it had already taken place.

The counsel insisted there were “grey areas” in the police probe.

Before adjourning the hearing till Friday, the court asked Haris whether the Therapyworks employees were nominated in the case as suspects to which the counsel replied in the affirmative.

He also told the court that he would try to wrap up arguments in the case by tomorrow.

A first information report (FIR) was registered later the same day against Zahir Jaffer, who was arrested from the site of the murder, under Section 302 (premeditated murder) of the Pakistan Penal Code on the complaint of the victim’s father.