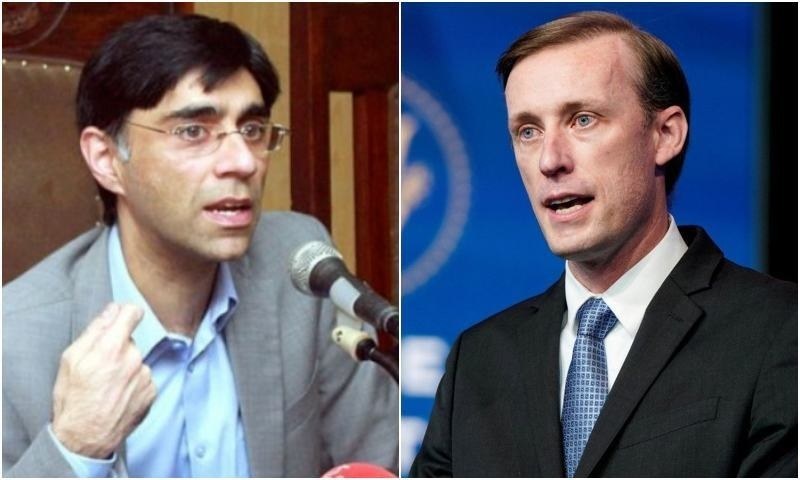 National Security Adviser (NSA) Moeed Yusuf left for an official visit to the US on Monday as part of high-level engagements agreed between him and his American counterpart, Jake Sullivan, during their first meeting in Geneva in May.

During the visit, Yusuf will meet Sullivan to review the progress on bilateral engagement between the US and Pakistan.

He will also call on other US legislators, senior officials, US-based think tanks and media, and interact with the Pakistani community.

Their first meeting on May 24, according to a Dawn report, was seen as an icebreaker, taking place against the backdrop of an impression of a lack of warmth in ties between Islamabad and Washington, given that there had been no communication between President Joe Biden and Prime Minister Imran Khan’s administrations until then.

The report said Yusuf had complained about the minimal engagement between the US and Pakistan during the early days of the Biden administration in his first meeting with Sullivan, who, in response, had attributed a lack of engagement between the two countries to the Covid-19 pandemic and a greater focus on internal issues.

The US security adviser had also committed to increasing and sustaining bilateral engagement between the US and Pakistan.

Later, the discussion was described by both sides as “positive”.

The Dawn report had linked the US desire for re-engagement to its expediencies relating to the withdrawal of its troops from Afghanistan and seeing Pakistan as a key player in the emerging Afghan situation, believing that it could influence the Taliban to reach a political settlement with the Afghan government.

Moreover, the meeting had coincided with the claim by the Pentagon that Pakistan had allowed the US military to use its airspace and given ground access for supporting its presence in Afghanistan after the withdrawal.

A week prior to their May meeting, US Assistant Secretary of Defence for Indo-Pacific Affairs David F. Helvey had told the Senate Armed Services Committee that “Pakistan has allowed us to have overflight and access to be able to support our military presence in Afghanistan”.

However, Pakistan Foreign Office Spokesperson Zahid Hafeez Chaudri was quick to deny the claim and had told journalists that “there is no US military or airbase in Pakistan, nor was any such proposal envisaged. Any speculation on this account is baseless and irresponsible and should be avoided.”

Later, PM Imran had said that Pakistan would “absolutely not” allow any bases and use of its territory to the US for any sort of action inside Afghanistan.

“Absolutely not. There is no way we are going to allow any bases, any sort of action from Pakistani territory into Afghanistan. Absolutely not,” the prime minister had said during an interview given to HBO.

This, too, created an impression of widening fissures between the US and Pakistan, which had remained allies for long, through the US war in Afghanistan. The impression was deepened when Prime Minister Imran Khan had stressed last month that it is “very unfair” of the US and Western powers to “put pressure” on countries like Pakistan to choose sides and downgrade their relationship with China.

The premier had said that despite the pressure, Pakistan would not change or downgrade its relationship with China because the relationship was “deep”.

“Whatever will happen, our relationship between the two countries — no matter what pressure is put on us — is not going to change,” he had said in an interview with the English-language state broadcaster China Global Television Network.

Given the situation, Yusuf’s visit to the US is likely to be seen as a significant development in transforming US and Pakistan relations, especially when it coincides with US Secretary of State Antony Blinken leaving for India and urging for a stable relationship between India and Pakistan.