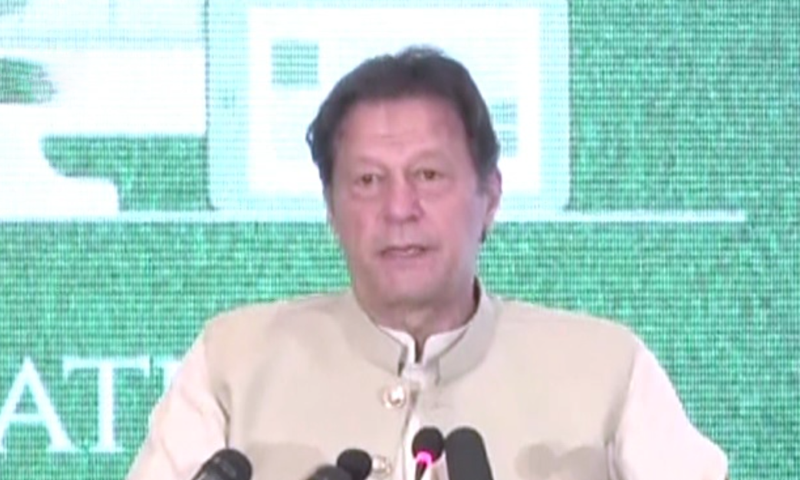 Prime Minister Imran Khan said on Wednesday that only those elements who were benefitting from a corrupt system were opposed to the use of electronic voting machines (EVMs) and had vested interests in resisting change in Pakistan.

The premier made these remarks at a ceremony held in Islamabad to mark the signing of performance agreements between him and federal ministers.

He said that his government had a great opportunity to prove that they could perform well as “we are facing all mafia, [and] all [those with] with vested interests and do not want [a positive] change in this country are opposing us.”

“They are even opposing EVMs,” the premier said, asking what benefit would the machines be to the government and ruling party.

He pointed out that almost every election in the country had been controversial, but none of the parties who had formed the government had ever worked towards a solution for the problem.

“After the 1970s, anyone who loses in an election makes allegations of rigging,” he said. “And we are introducing a system (EVMs) that could solve all of Pakistan’s problems.”

He added, “Who are these people who are opposing [EVMs] … Realise that it a small fraction with vested interests and that has benefitted from a corrupt system that is opposing this”.

The prime minister’s remarks follow a longstanding dispute between the Pakistan Tehreek-i-Insaf (PTI)-led government and the opposition and Election Commission of Pakistan (ECP) over the use of EVMs.

While the government has been insisting on the use of EVMs in the next general elections, maintaining that the move would ensure transparency and free and fair elections, the opposition has rejected the proposal.

The opposition has particularly taken exception to the proposal over not being consulted on the matter and the government bulldozing the legislation for the use of EVMs in the National Assembly, despite the former’s protest.

The ECP, meanwhile, has raised 37 objections to the proposed introduction of EVMs. It has warned that the machine is tampering-prone and its software could easily be altered.

In the last few weeks, the rift over the EVMs has aggravated, with Railways Minister Azam Khan Swati accusing the ECP of “always” rigging polls and going as far as to say that such institutions should be “set on fire”.

This was followed by Information Minister Fawad Chaudhry accusing the chief election commissioner (CEC) of acting as a “mouthpiece for the opposition”.

In response, the ECP served notices to the ministers, seeking evidence of the allegation of taking bribes made against the institution.

During his address on Wednesday, the prime minister also highlighted the importance of performance agreements and achieving the targets set in the last two years of the PTI government.

According to a tweet by the Prime Minister’s Office (PMO), the prime minister was to sign performance agreements covering 1,090 initiatives with 41 federal ministers.

In a series of tweets, the PMO explained that the agreements were being signed to improve the performance of the ministries over the next financial years. The initiatives covered under these agreements pertain to development projects, economy, policymaking, and reforms, among other sectors.

The PMO added that the agreements were focused on improving governance and making it result-oriented, ensuring the inclusion of reform agenda in annual targets, setting annual targets for the government, setting a baseline for effective performance audit, evaluating performance in every quarter of the year on the basis of data, preempting obstacles in the way of administrative measures, ensuring communication between ministries, ensuring the continuity of government agenda and communicating it to citizens.

During his address on Wednesday, PM Imran said while referring to the agreements that “it is very important to push ourselves, set [high] targets and monitor them quarterly, and we will be able to achieve these targets.”

Sharing his experience of leading the Pakistan cricket team and spearheading the establishment of Shaukat Khanum Memorial Cancer Hospital and Research Centre, he emphasised the need for having high aspirations, constant innovation and self-evaluation and analysis of one’s performance.

He also stressed the importance of hard work and diligence for meeting targets, saying that his government had survived three difficult years.

The prime minister expressed the hope that his cabinet would achieve the quarterly targets they had set for themselves through hard work.