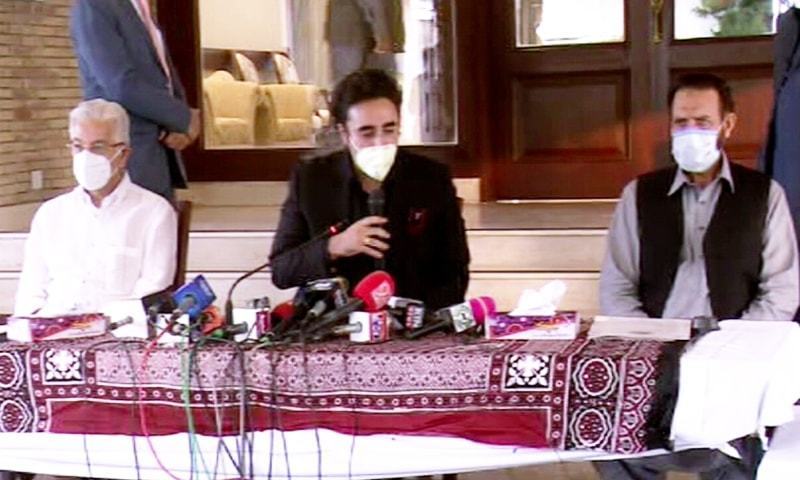 Opposition parties on Sunday rejected the federal government’s budget for the new fiscal year, lambasting the ruling PTI for being unable to provide people with relief during the coronavirus pandemic.

The announcement — made during a press conference in Islamabad — comes ahead of Monday’s crucial voting in the National Assembly to pass the federal budget.

Speaking alongside PML-N’s Khawaja Asif and Jamaat-i-Islami’s (JI) Mian Aslam, PPP Chairman Bilawal Bhutto-Zardari said the “united opposition” has rejected the government’s budget and has issued a joint statement in this regard.

“This budget has united the people against the government. We had thought that the budget would help protect the people’s economic rights. Instead of doing that, it has added to their burden.”

The PPP chairman added that the government’s unexpected decision to increase the prices of all petroleum products by up to nearly Rs26, was an “excellent example of this government’s hypocrisy”.

Responding to a question, Bilawal said that the opposition had played a “responsible role” so far. “When the pandemic hit, we said we will keep partisan issues aside and fight it together.

“Three to four months have passed and this is still our stance, but the prime minister has not taken this seriously. Before the pandemic, he was a threat to our democracy and economy. Now, he is a threat to people’s lives and their economic prosperity.”

The PPP chairman went on to say that the PTI lacked the leadership needed to combat the pandemic. “You need to have an ‘above politics’ view […] the PTI doesn’t have such leadership, and citizens are suffering as a result.”

Bilawal also said that Leader of the Opposition in the National Assembly Shehbaz Sharif was in contact with all parties despite having the coronavirus. He said that an All Parties Conference will be announced as soon as Shehbaz recovers.

“Even when sick, Shehbaz is making Imran sweat.”

Bilawal added that if the government had paid heed to the advice of doctors and other international bodies, the country may have been spared from Covid-19. “The only way to solve the country’s problems is through democracy […] not with selected consensus.”

‘As long as Imran is premier, we are headed towards disaster’

Representing the PML-N, Khawaja Asif reiterated that instead of providing people some relief during this difficult time, the government had added to people’s difficulties.

“Prime Minister Imran Khan has become a national liability. As long as he is the premier, we are headed towards disaster. The sooner we get rid of him, the more chances we have of salvaging the situation,” he said, adding that they will formulate a joint strategy in this regard.

He stated that the manner in which the government’s coalition partners were abandoning ship was a sign that its end was near.

He added that that a government that used state institutions to target the opposition was “cowardly”, adding that it was now time for them to be held accountable.

Asif said that the opposition will explore all constitutional means to change the government. “There is a need for building consensus within the opposition, which is already there. The PTI has a lot [divisions] at the moment, which will become more visible in the coming days.

“[The country] needs a new mandate.”

JI’s Mian Aslam also criticised the government’s ability to address current problems in the budget for the new fiscal year, calling it “unrealistic”.

Speaking to the media in Islamabad, Azhar said that he failed to understand why the opposition was rejecting the budget. “No new taxes have been imposed, relief has been given […] withholding taxes and custom duties have been removed, so what are they rejecting?”

He said that this had become a sort of “tradition” for the opposition. “When I was reading the budget, it has not yet been tabled, but even then they had rejected it. This has become a tradition for them for political point-scoring.

“Since we are facing difficult times, I expected the situation to be different. However, the opposition has always bowed down to their own interest and not the country’s.”

He added that the criticism about an increase in petroleum prices was baseless as prices in Pakistan were still lower than other countries in the region.

The information minister highlighted that the opposition was unable to see a person without a business or agenda come into power, adding that they should be ashamed for making such statements during this difficult time.