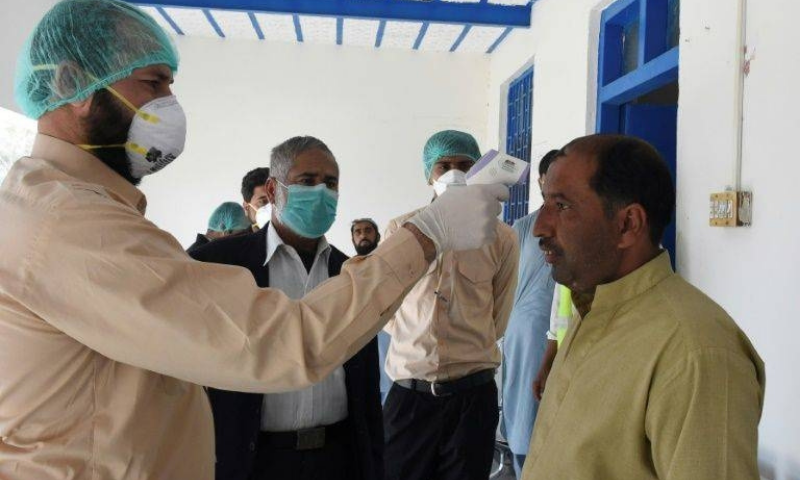 ISLAMABAD: The federal government has claimed that Pakistan is among 92 countries in the world where the UK strain of Covid-19 has been detected, urging people to follow health guidelines and go for vaccination.

On the other hand, following the emergence of 1,315 more patients and 33 deaths in a single day, the overall number of cases since the first patient was reported in the country last year has reached 578,797, with the positivity rate of 6.49 per cent. Besides, 12,837 people have succumbed to the deadly virus till now.

“The new strain is being seen across the world and continues to be detected in samples in Pakistan. While this strain does not cause more severe disease, there is evidence that its transmission is faster,” a statement issued by the Ministry of National Health Services (NHS) stated.

“This highlights the need to continue following prescribed standard operating procedures (SOPs) and guidelines issued by the government and to get vaccinated when your turn comes. The ministry is continuously monitoring the situation through a robust surveillance system,” the statement added.

An official of the NHS ministry, requesting not to be named, said the UK strain cases were mostly being found among people returning from abroad.

“The NIH had been tasked with testing a proportion of all positive samples to detect cases of the new strain,” he said.

The NHS ministry spokesperson, Sajid Shah, told Dawn that people should pay no heed to rumours and get themselves vaccinated as it would help achieve the target of herd immunity.

“Registration of healthcare workers and citizens over 60 years of age is continuing. Pakistan will also get the vaccine under Covax in the first week of March and then vaccination will start within days,” he said.

According to data of the National Command and Operation Centre (NCOC), 8,912,918 tests have been conducted since the first case was detected in the country on Feb 26, 2020, out of which 578,797 have contracted the virus, showing a positivity rate of 6.49pc.

Vaccine safe for people over 60

Replying to a question regarding the confusion prevailing about whether people over 60 years should get vaccinated, spokesperson Sajid Shah said citizens should pay no heed to false information.

“The confusion was created because the government decided not to administer the Chinese vaccine to people over 60 years. The decision was made because Sinopharm did not include sufficient number of people over the age of 60 in its clinical trial. However, there is no such issue with the Oxford-AstraZeneca vaccine, which is going to reach Pakistan in the first week of March,” Mr Shah said.

He said Oxford-AstraZeneca could be given to people of any age.

“A few days ago we issued a statement that Covid-19 vaccines were being administered in over 60 countries, out of which 32, including the UK, were using Oxford-AstraZeneca,” he said.

It is worth mentioning that the confusion arose following a statement issued by Special Assistant to the Prime Minister on Health Dr Faisal Sultan in which he said Sinopharm should not be administered to people aged over 60.

However, the very next day he clarified that he did not mean to say that the vaccine was hazardous for senior citizens. “Since clinical data did not show that the vaccine was given to people over 60 years, it was decided to administer it only to those who were a maximum of 60 years of age,” he said.

The special assistant had said that other vaccines, including Oxford-AstraZeneca, had no such issue, and in future even Sinopharm might be administered to people of all age groups under a new research.

Sinopharm vaccine, meanwhile, is being given to people over 60 in the United Arab Emirates as well as other countries.