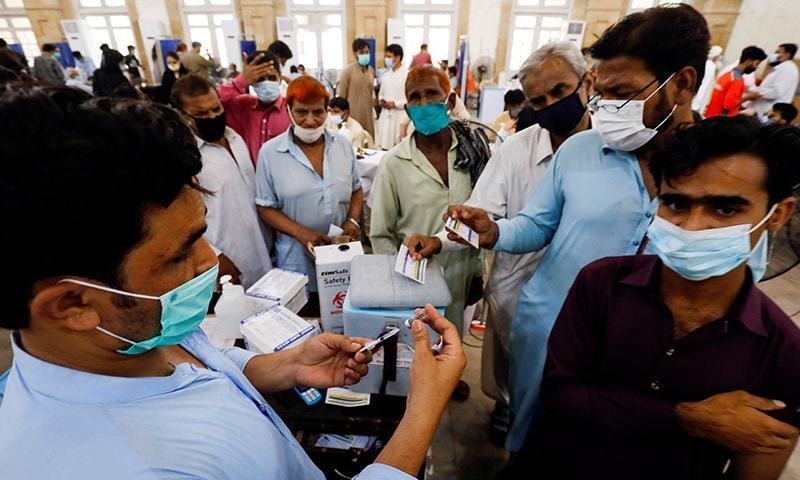 The fourth wave of Covid-19 pandemic has continued its upward trajectory, with Pakistan reporting 5,029 cases over the past 24 hours — the highest number of daily cases in the country since April 29 when 5,112 infections were reported.

According to the National Command and Operation Centre (NCOC), the body responsible for the country’s Covid-19 response, the new cases were detected against 56,965 tests and took the overall national tally to 1,034,837.

The positivity rate of the daily cases was recorded at 8.8 per cent — up from 8.46pc the previous day.

Meanwhile, 62 more coronavirus-related fatalities raised the country’s death toll from the disease to 23,422.

A breakdown of Covid-19 cases and deaths reported in Pakistan during the last 24 hours is as follows:

Pakistan’s reporting of its highest number of coronavirus cases in nearly two months has come as a grim reminder of the worsening pandemic situation, with Sindh going under a lockdown and reports of hospitals beginning to feel the burden.

However, it has coincided with Federal Planning, Developing and Special Initiatives Minister Asad Umar’s announcement that Pakistan has achieved the milestone of the total number of vaccine doses administered in the country crossing the 30 million mark.

“Pakistan has crossed 3 crore (30 million) vaccinations. The first crore (10 million) took 113 days. The second 28 days and the 3rd only 16 days.,” he said in a tweet. “Pace has rapidly increased. All 6 days this week were a record. 9 lakh 34 thousand vaccinations yesterday . In last 6 days 5 million vaccinations were done.”

The latest surge is blamed on the Delta variant, originally detected in India some months ago, along with lax social attitudes and increased activity around Eidul Azha.

The situation seems particularly bad in Sindh, which continues to report the highest number of cases among all province and is now under what authorities say is a “partial” lockdown.

Doctors working in Karachi’s hospitals had also issued warnings of a surge in Covid-19 cases, particularly among individuals who have not yet been vaccinated — and who account for over 85 per cent of admissions to ICUs in recent days, according to a study by the Sindh health department.

During a meeting of the provincial taskforce on coronavirus held at the Chief Minister House on Friday, doctors had warned that the Covid-19 situation in the province could turn “terrifying” and sounded the alarm over the increasing pressure on hospitals as well as the rapid spread of the highly contagious Delta variant.

Yet, the imposition of a lockdown remains to be a point of contention between Sindh and the Centre.

After the Sindh government announced a lockdown on Friday, Minister for Information and Broadcasting Fawad Chaudhry said the provincial government would not be allowed to impose a complete lockdown in the province as the federal government’s policy on controlling the spread of Covid-19 was crystal clear.

In a statement, Chaudhry had said that under Article 151 of the Constitution, Pakistan is a single market with the port of Karachi acting as the “jugular vein of its economy”, and any move that could affect the country’s economic lifeline could not be allowed.

This followed Bilawal lashing out at the government on Saturday for its criticism of the lockdown in Sindh, stating that Prime Minister Imran Khan and his ministers would be the ones responsible if the Covid situation in Karachi became similar to India’s.

“If coronavirus spreads in the province or in Karachi like [it did] in India then Khan sahab and his ministers will be responsible,” he had said while addressing a press conference in Islamabad.

Eventually, Sindh relaxed some of the restrictions imposed as part of the lockdown.

The Sindh government revised its coronavirus lockdown restrictions, lifting the ban on pillion riding, allowing small transport to run within the limits of Karachi and giving exemption from timing restriction to certain businesses.

Even then, Sindh Governor Imran Ismail went on to say that the “Sindh government has created a curfew-like situation here”.