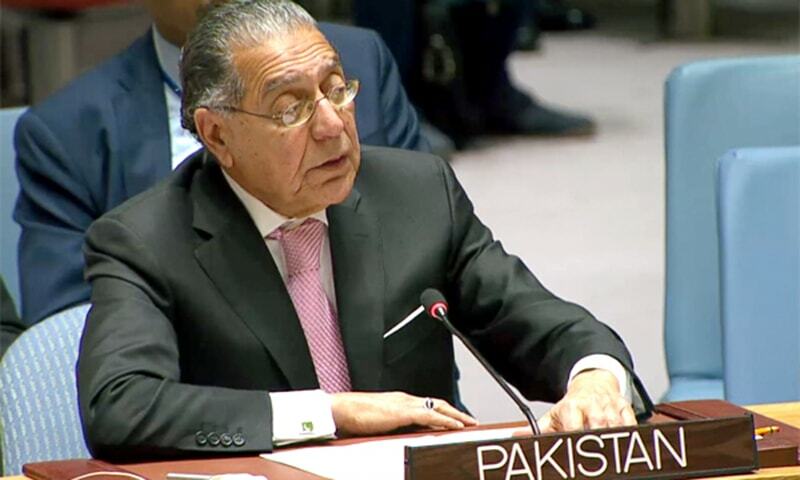 Pakistan has called on the United Nation’s Decolonisation Committee and the Security Council to take action to end India’s colonialisation of Jammu and Kashmir and enable its people to exercise their right to self-determination.

“Eradicating colonialism is part of the unfinished agenda of the United Nations,” Ambassador Munir Akram emphasised in a speech to the General Assembly’s Special Political and Decolonisation (Fourth) Committee on Wednesday.

After his speech, delegates of India and Pakistan had a verbal duel over the Kashmir dispute.

In his remarks, Ambassador Akram said that the Indian occupation of Jammu and Kashmir is the “worst manifestation of modern-day colonialism”.

Since 1946, 80 former colonies have gained independence, he pointed out but still, the people of Jammu and Kashmir and Palestine are among those who are denied the right to self-determination.

Noting that the Declaration on Decolonisation proclaims that all people have the right to self-determination, Ambassador Akram said that in the case of Jammu and Kashmir, this right was further sanctified by the UNSC resolutions that state the future of the region should be decided by its people through a free and fair plebiscite held under UN auspices.

But Kashmir today is the most densely occupied place in the world, with 900,000 Indian troops, deployed in the disputed territory, he said, adding that the entire Kashmiri leadership has been imprisoned, thousands of Kashmiri youth, including women and children, detained, protests put down violently, with neighbourhoods and villages destroyed as “collective punishment”.

“It (India) has locked down the internet and locked out impartial observers from occupied Kashmir,” Ambassador Akram remarked.

The body of iconic Kashmiri leader Syed Ali Shah Geelani was snatched from his family, whisked away and buried hurriedly in a non-descript place, denying his family the right to the prescribed Islamic burial rites, he recalled.

“This is not only a measure of Indian tyranny but also its fear of the free voice of the Kashmiri people,” the Pakistani envoy said.

Since its illegal attempt to annex Jammu and Kashmir, he said, India aims to achieve its ominous “final solution” by seeking to change the demographics of the region, providing fake domicile certificates to Hindu outsiders.

“This surely amounts to genocide,” he stressed, calling for action by the Security Council that would enable the people of Kashmir to exercise their right to self-determination.

Speaking about UN peacekeeping operations, Ambassador Akram emphasised the need to protect peacekeepers and welcomed the use of modern technology to strengthen camp security, monitor convoy movements and provide troops with telemedicine care.

Over the last six decades, he said, Pakistani peacekeepers have operated effectively in some of the most challenging environments due to high morale, discipline, rich experience and training.

Underlining that the UN Secretary-General’s A4P (Action for Peacekeeping) initiative stipulates that peacekeeping is most effective when it is supported by an overall political strategy, he said considerable work needs to be done in this context.

The Security Council, Ambassador Akram pointed out, has been unable to develop political solutions to several old and new disputes across the world, including the Jammu and Kashmir dispute, where one of the oldest UN missions, the United Nations Military Observer Group in India and Pakistan (UNMOGIP), is stationed.

Reacting to Ambassador Akram’s tough statement, an Indian delegate repeated allegations about Pakistan’s involvement in terrorism, and said that by raising the Kashmir issue, Pakistan had wasted the committee’s time.

The Indian delegate also claimed that “the entire territory of Jammu and Kashmir was, is and will always be an integral part of India.”

He said that drawing attention to the continued Indian colonisation of Jammu and Kashmir is not a waste of the committee’s time.

“Kashmir is an internationally recognised disputed territory, and not an integral part of India. Making a wrong claim again and again, does not alter the legal reality,” remarked Chaudhry, who is a counsellor at the Pakistan mission to the UN.

The Security Council resolutions, he said, established self-determination as the governing principle for the settlement of the Kashmir dispute.

“This is the world body’s commitment to the people of Jammu and Kashmir,” the Pakistani delegate said. Pointing out that for its narrow political reasons, India equates the freedom movement in Kashmir to terrorism, he said that such propaganda is only meant to deceive the international community.

“The United Nations has not only the right, but the obligation to discuss the Kashmir dispute”, Chaudhry added.