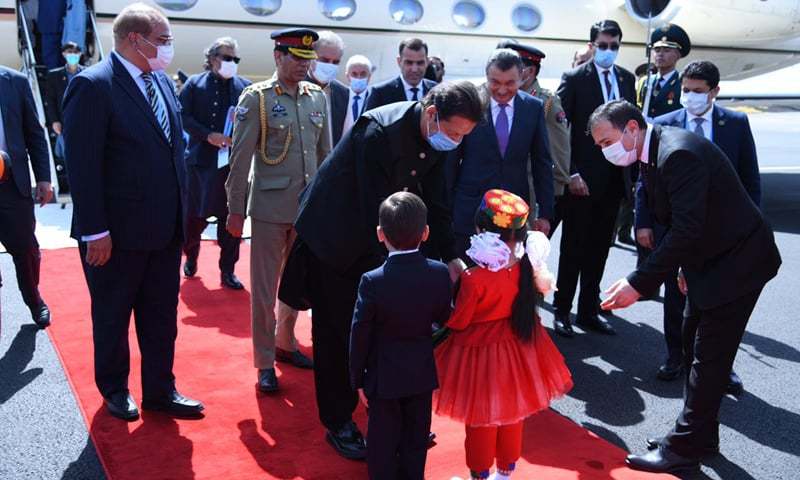 Prime Minister Imran Khan on Thursday invited the business community of Tajikistan to invest in Pakistan, assuring them of facilitation by his government.

The premier is in Tajikistan on a two-day visit, during which he will attend the 20th Shanghai Cooperation Organisation’s (SCO’s) Heads of State Summit in Dushanbe, according to a tweet by the Prime Minister’s Office (PMO).

After arriving in Dushanbe, the prime minister inaugurated the maiden meeting of the Pakistan-Tajikistan Business Forum, for which a group of Pakistani businessmen have also travelled to Tajikistan.

The joint business forum will catalyse growing trade and investment relations and promote business-to-business contacts between the trading communities of both countries, Radio Pakistan reported.

Addressing the forum, Prime Minister Imran stressed the need to increase bilateral trade between the two countries, regretting that presently it amounted to a “minuscule” $80 million and there was a lot of potential still.

He said Pakistan, with a population of 220m people, was a “huge market” for the Tajik business community and investors. Inviting them to Pakistan, he assured them of government facilitation to make business activity easier.

The premier said that both countries would benefit from more trade.

The premier said work on the CASA-1000 power transmission line would be expedited so Pakistan too could benefit from “your clean and cheap energy [such as] hydroelectricity”.

On Afghanistan, the prime minister prayed for peace in the country, saying that it was “extremely important” for Pakistan-Tajikistan trade due to better connectivity.

“Your president and I will be trying everything to make sure there is peace [in Afghanistan], especially between the two major communities of Tajiks and Pakhtuns. We will be doing our best to make sure they get together and there is an inclusive government,” he said.

Prime Minister Imran also held a meeting with Kazakhstan’s President Kassym-Jomart Tokayev on the sidelines of the SCO summit. The two leaders exchanged views on bilateral relations and discussed important regional and international issues, according to the PMO.

The two extended invitations to each other to visit their respective countries and also agreed to increase the frequency of high-level political exchanges.

“The prime minister underlined that Pakistan was resolved to comprehensively upgrade engagement with Central Asian countries through its ‘Vision Central Asia’ policy.

“[He] particularly emphasised the importance of connectivity and Pakistan’s pivotal position in providing the shortest access route to the sea,” the PMO said.

He highlighted the importance of the Trans-Afghan railway project that will connect five cities: Termez, Mazar-i-Sharif, Kabul, Jalalabad and Peshawar. The two leaders also agreed to enhance connectivity through land and air routes, in order to promote regional integration.

In his remarks, the premier explained his vision of socio-economic development and Pakistan’s shift from geopolitics to geoeconomics.

While discussing Afghanistan, Prime Minister Imran stressed the importance of peace and security in the country for the region’s sake and the need for continued international engagement to “support the Afghan people, to address urgent humanitarian needs, and take steps to stabilise the economy”.

“The prime minister stressed that sustainable peace and security in Afghanistan would contribute to regional peace, connectivity and progress,” the statement said.

Earlier, the prime minister was received by Tajik Prime Minister Kokhir Rasulzoda and was accorded a red-carpet welcome after landing at Dushanbe International Airport, the PMO said.

Foreign Minister Shah Mahmood Qureshi is accompanying the premier on the visit.

After reaching Dushanbe, he tweeted: “Pleased to be in Tajikistan with PM Imran Khan
for his third visit to Central Asia, underlining Pakistan’s enhanced engagement with the region.”

Radio Pakistan earlier reported that the prime minister was accompanied by a high-level ministerial delegation and “will have bilateral meetings with other participating leaders on the sidelines of the SCO summit”.

A meeting of the Pakistan-Tajikistan Joint Business Council will also be held on the sidelines, the report said.

The SCO was founded in Shanghai in 2001 by the leaders of Kazakhstan, Kyrgyzstan, Tajikistan, Uzbekistan, Russia and China.

It evolved from an earlier regional security grouping formed in 1996 after the collapse of the Soviet Union, when the Central Asian states gained independence from Moscow.

Initially focused on regional security, its activities have expanded to cover economics and trade, transport and law enforcement. However, security and economic cooperation remain priorities.

‘Visit will prove to be important milestone’

Commenting on the prime minister’s visit, Information Minister Fawad Chaudhry said that it would “prove to be an important milestone and further increase the prestige of Pakistan”.

In a televised message, the minister said that the prime minister will hold meetings with the Iranian president, Chinese foreign minister and the leadership of Central Asian States on the sidelines of the SCO summit.

He added that the situation in Afghanistan will also be discussed and that Pakistan recognised Tajikistan’s important role in Afghanistan.

Chaudhry said this visit would provide an opportunity to “further our doctrine for a stable and inclusive government in Afghanistan and move towards a regional solution”.