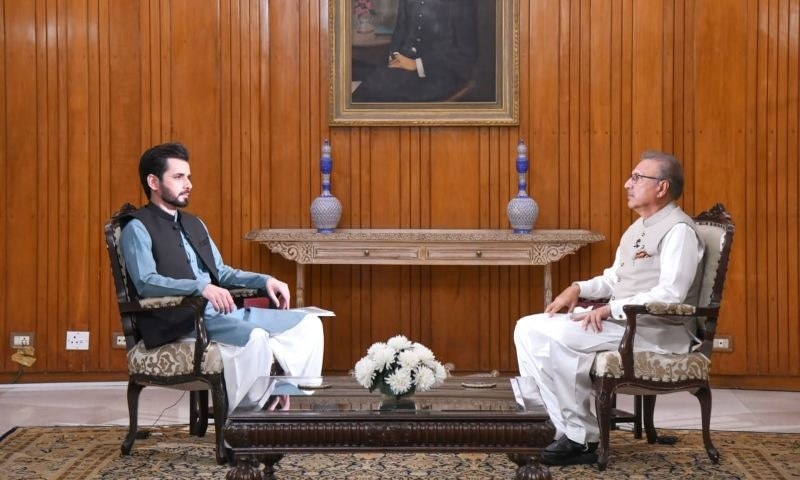 President Dr Arif Alvi has said that Prime Minister Imran Khan’s apparent change of statements on Kashmir was not a U-turn, and that a leader must change their stance as per the situation.

Alvi was talking in an exclusive interview on DawnNewsTV show ‘Live with Adil Shahzeb’ at the presidential office. The programme will be aired tonight (Monday) at 10pm.

Prime Minister Imran had last month said that Pakistan normalising relations with India unless it restored Kashmir’s semi-autonomy would be a major “betrayal” to the people of occupied Kashmir. Earlier this month, he said in an interview with Reuters that Pakistan was ready to restart talks with India if Delhi provided a roadmap towards restoring the previous status of occupied Kashmir.

When asked whether the two statements did not reflect a shift in the premier’s stance, President Alvi said: “At times, people term a shift as a U-turn, but one should change their judgement according to changing situations and new reasons.”

He said it was not justified for a leader to see their spoken words as written in stone, adding that the key was not to compromise on the principles. ‘’Even I have reviewed many of my life’s decisions,’’ the president remarked.

Alvi said Prime Minister Imran was the one who could judge better considering the “evolving situation”, citing the developments in Afghanistan and new international alliances.

The president said India had committed a “foolish” act of internationalising the Kashmir issue by revoking the region’s status and oppressing its people.

Asked about the mistrust between the government and the opposition on the plan to introduce Electronic Voting Machines (EVMs), President Alvi said he invited the entire opposition to come and examine the technology but to no avail. ‘’Just a fear is being created that this EVM will be hacked or [there will be some] wrongdoing because it will not only have ballot papers but the electronic system to make the count,’’ he said, explaining that the reason for this was to place a double check on the process.

Alvi said he thought the process of accountability needed to be made tougher. ‘’Those who have been in power for decades need to be held accountable,’’ he said.

Praising the performance of the National Accountability Bureau, the president said even the opposition now said ‘’cases of government personalities must be sent to [NAB]”, which he said meant the accountability watchdog was doing its job right.

Alvi also defended sending the reference against Supreme Court Justice Qazi Faiz Isa to the Supreme Judicial Council. ‘’I think it was handled in a better way,’’ he said.

Answering a question about rumours of Pakistan agreeing to provide a military base to the United States post its withdrawal from Afghanistan, the president said it was “possible” that Pakistan had denied to do so.