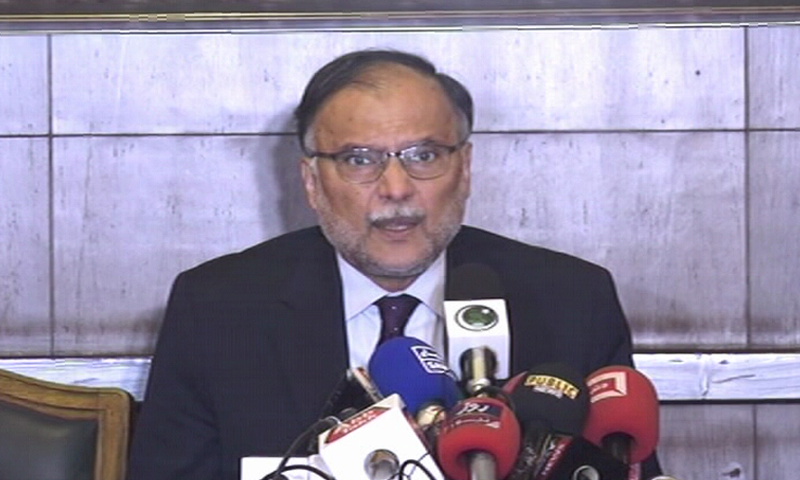 Senior PML-N leader Ahsan Iqbal on Saturday asked Pakistan Peoples Party Chairman Bilawal Bhutto-Zardari to “show numbers” to back up his suggestion of a no-confidence motion against the incumbent government, pointing out that a similar effort had previously failed.

Addressing a press conference in Lahore, the PML-N secretary general said, “As far as the PML-N’s thinking is concerned, we think if Bilawal Bhutto [Zardari] sahab has the numbers to bring a no-confidence motion then he should certainly show them.”

“We saw [previously] in the Senate where we had the [majority] numbers but [despite that] the no-confidence motion was not successful so there is only one path we should follow, and that is to pursue a decisive long march against this government.”

The PML-N leader was referring to the opposition’s failure in passing a no-confidence motion against Senate Chairman Sadiq Sanjrani in July 2019 when several members of opposition parties had ditched the party leadership by either voting against their own resolution or deliberately wasting their votes.

As many as 64 members of the opposition had rose in their seats to approve the motion seeking permission to move the no-trust motion against Sanjrani.

However, when it came to secret balloting, only 50 of the opposition senators had voted in favour of the resolution, causing serious distrust between the PPP and PML-N with leaders of both parties suspecting each other of foul play.

During today’s press conference, Iqbal emphasised that a long march was the PDM’s only option to oust the government, adding that the PPP chairman’s suggestion of a no-confidence motion was an old one.

Iqbal went on to say that members of the 10-party Pakistan Democratic Movement (PDM) alliance “deliberate on their suggestions and take decisions through consensus of opinion”.

Iqbal’s comments come a day after Bilawal said only constitutional, democratic and legal options would be used to send the government packing, hinting at the possibility of a no-confidence motion.

Speaking at a ceremony in Larkana on Friday, Bilawal had said a no-confidence move could be tabled against the “selected” prime minister and speaker, adding that all member parties of PDM would be convinced to use this option and reach consensus on the issue.

He had said that it was inevitable for “puppets” to quit in favour of a pro-people government. “Our future is bright. We have potential to be a true peoples’ representative government,” he had said.

Iqbal lashes out at govt’s incompetence

Iqbal also demanded resignations from the prime minister and Aviation Minister Ghulam Sarwar Khan after the United Nations restricted employees from travelling aboard any Pakistani airline because of “dubious” piloting licenses.

He said it was a decision that destroyed Pakistan’s reputation just because of the “incompetence and ego worship” of the prime minister and aviation minister.

The PML-N leader also criticised the government’s handling of the Pakistan International Airlines (PIA) plane seized in Malaysia over a leasing dispute. He said it was the government’s responsibility to ensure payment for the airline with which the nation’s “respect and passenger’s travel” was associated.

He also commented on the response of the government in paying off the claims in the Broadsheet case. He said that the stark difference in the government’s response in the two cases showed that there were “personal interests involved in transferring that amount”.

He also responded to the government’s claims that the Broadsheet case would become ‘Panama Leaks-II’ and said: “Yes indeed this will be Panama II because Panama I was also a fraud and Broadsheet is also a fraud.”

He said Justice (r) Sheikh was part of the National Accountability Bureau (NAB) management when the agreement was signed thus there is a “conflict of interest”.

He also pointed out that Sheikh’s position on the board of governors of Shaukat Khanum hospital showed the government wanted to “cover up” the investigation by bringing in people with such affiliations.

“If Azmat Saeed values his honor and respect, then he should withdraw from this [investigation],” he said.