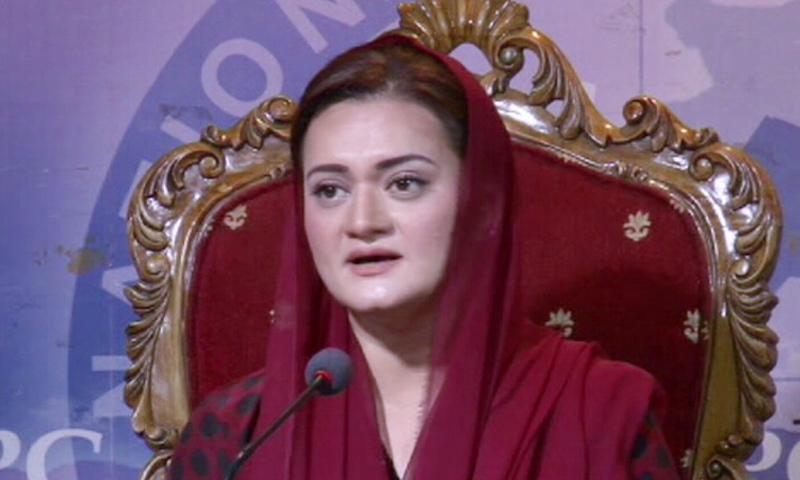 PML-N Information Secretary Marriyum Aurangzeb on Wednesday announced that the party will launch a “corruption paper” on three years of the PTI in power, revealing its “financial irregularities and siphoning of funds”.

Addressing a press conference in Islamabad, the PML-N leader claimed the PTI regularly threw a red herring to divert public attention from core issues of inflation and unemployment.

She said the “corruption paper” on PTI, to be launched on Aug 17, will highlight details regarding the siphoning of funds in public projects and corruption done in the country in the last three years of the incumbent government.

“In July alone, Pakistan witnessed historic inflation as the prices of at least 51 essential commodities skyrocketed in the month. Similarly, the government bought LNG for $15.25 per unit which is 70 per cent more than the purchasing price of PML-N in its tenure,” she highlighted.

Aurangzeb claimed the PTI had expelled the minister who was about to clinch the LNG deal at $11 and $13 per unit, “but the same was later bought at $15 and as a result, Pakistanis will have to pay $2 billion annually from their pockets”.

Lashing out at the government over record imports, she said there were talks of increasing trade deficit and they were attributed to PML-N, adding that “imports of record $16 billion have been witnessed in July, while 40pc devaluation of Pakistani rupee was seen last month … will the government speak on it?” she questioned.

She also claimed that the IMF programme had failed, saying the government hadn’t signed an agreement with it after the budget.

The PML-N leader said if they did not accept the IMF conditions then forthcoming inflation will be damaging for the country and its people.

“Economy doesn’t get fixed through tweets, it is streamlined when you take measures to bring down prices of essential commodities,” she added.

Aurangzeb said only one person was responsible for all the crises in the country “and that is Imran Khan”. She alleged that Khan made policies for his “ATMs and mafias”, as they help him buy votes in elections.

She said her party would hold daily pressers to expose the PTI’s malpractices.

‘No multiple narratives within PML-N’

The PML-N spokesperson also rejected reports of various intra-party narratives on public issues, saying the stance of Mian Nawaz Sharif and Shehbaz Sharif were quite clear and their narrative was all about giving respect to the Constitution and the vote.

She lamented that the government threw diversions to mislead the public and hide its own “incompetence” under the garb of alleged divisions within the opposition party.

She said the government was facing embarrassment on various fronts. “Imran Khan is now seeking apology from Shehbaz Sharif, admitting he falsely accused him of corruption. No reply was filed in the court for four years about alleged offer of Rs10 billion by Shehbaz during Panama probe. They are now asking Shehbaz to withdraw the defamation case,” she claimed.

She went on to claim that the government also apologised in the UK court regarding a case filed by the Daily Mail. “Where is Shahzad Akbar, he must now hold a press conference on the Broadsheet case and apprise people of the money that will be paid to the court from the public’s pocket,” she alleged.

She also said that the Pakistan Democratic Movement had announced a rally in Karachi on Aug 13, adding that it had been postponed due to Covid-19. “Soon we will announce a new date,” she added.