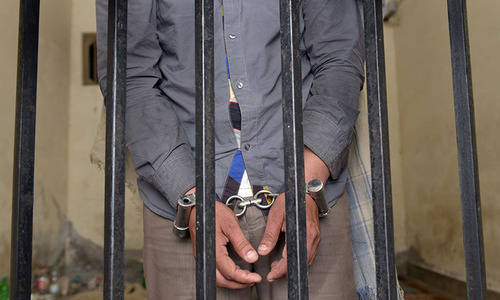 Karachi police on Saturday claimed to have arrested a man for allegedly kidnapping, raping and killing a six-year-old girl in Korangi.

However, investigators said they were waiting for the suspect’s DNA report to formally arraign him in the case.

The minor had gone missing from her house in Korangi’s Ghous Pak area on the night of July 27. Her body was found the next day from a garbage dump near her residence after a search lasting nearly eight hours.

Zaman Town police had registered the case’s first information report (FIR) under Section 7 (punishment for acts of terrorism) of the Anti-Terrorism Act, and sections dealing with kidnapping, rape and murder against unknown suspects.

In a statement released today, East Zone DIG Saqib Ismail Memon said that a suspect had been arrested and was being interrogated.

The suspect’s DNA samples will be taken and sent to a laboratory at the University of Karachi to match with samples collected from the crime scene, he said.

Memon said the suspect was “continuously” changing his statement during interrogation. “The suspect is a drug addict who knew the victim,” he said.

Meanwhile, Landhi-Korangi SP Shah Nawaz Chachar urged the media to exercise restraint when it came to reporting about the case.

“Premature and incomplete reports will hamper the investigation process as well as trial of the case,” he said.

“It’s a very serious issue and the offices of the Sindh chief minister and the prime minister are being updated at every stage,” he said.

He called on the media to wait till “things become clear enough” to share.