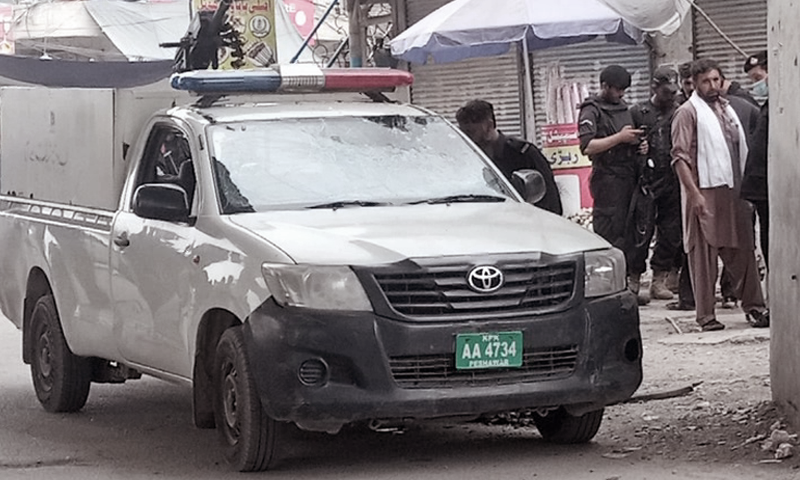 A policeman was martyred while a passerby was injured in a blast near Peshawar’s Karkhano Market on Friday, officials said.

In a statement, police initially said that an unidentified person had hurled a grenade at the police mobile during an operation against Covid-19 SOP violations.

However, Peshawar CCPO Abbas Ahsan — who visited the site to inspect the damage — later clarified that the mobile was on a routine patrol when it was targeted. There were four police personnel seated in the mobile at the time of the attack, he said.

The police official also said that the nature of the blast could not yet be determined. “It can’t be said for certain whether it was a grenade attack or some other device was used for the explosion,” Ahsan said, adding that the explosion took place inside the vehicle.

The deceased police official was identified as police team in-charge Ibn Amin, according to the CCPO. He added than an unidentified passerby was also injured in the incident and had been shifted to the hospital.

Meanwhile, a spokesperson for the Hayatabad Medical Complex said that the injured citizen had been discharged after receiving medical treatment. He said that the body of the martyred policeman had also been brought to the medical facility.

In October 2020, at least eight people were killed and around 120 others injured when a timed device went off inside a mosque in Peshawar’s Dir Colony.

A month before that, five people were killed and two others injured in a blast in the Akbarpura area of Nowshera after explosive material in scrap collected from the Kabul river detonated.