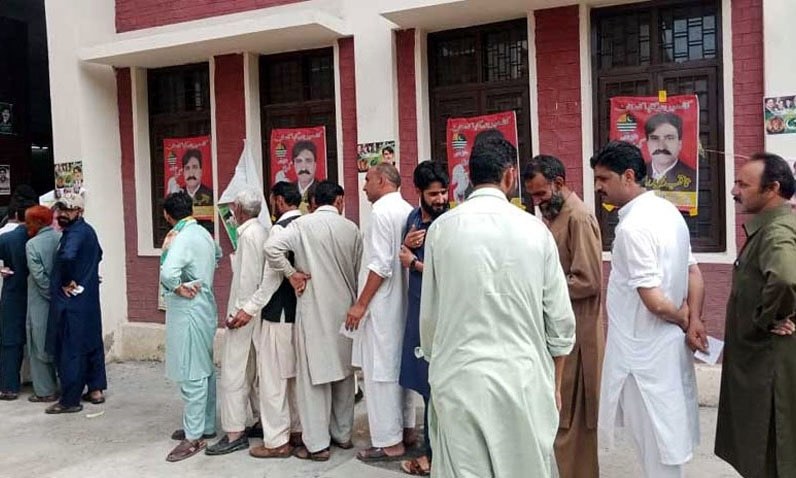 The polling time has ended for election to 45 seats of the AJK Legislative Assembly, after the voting process was marred by violence and clashes in some areas.

Voters present inside polling stations were allowed to cast their votes until after 5pm, while counting of the ballots has begun at some places.

At least two PTI workers were killed in a clash with PPP activists at a polling station in the Kotli district of Azad Jammu and Kashmir.

The two PTI activists were shot dead by unidentified persons at a polling station in the jurisdiction of Naarr police station in Charhoi, Kotli, according to police.

Muhammad Shabbir, an official at Naarr police station, identified the victims as 40-year-old Zaheer Ahmed and 50-year-old Ramzan. He added that the clash erupted between PPP and PTI workers at about 9:15am at the Mithi Jand polling station. In the ensuing gunfire, Ahmed was killed on the spot and Ramzan died on the way to the hospital.

Voting in some polling stations of other constituencies was also temporarily suspended due to incidents of violence. Several people were reportedly injured in clashes and a number of political activists were also detained by the police, according to reports.

The elections come after weeks of a highly charged and divisive election campaign that saw politicians from the three mainstream parties — the PTI, PPP and PML-N hurl allegations at each other.

The polling started at 8am and continued until 5pm without any break, according to a report by Radio Pakistan.

Media persons were initially not allowed to report from outside the polling stations but the issue was later resolved on the directions of the AJK Chief Election Commissioner (CEC) retired Justice Abdul Rashid Sulehria.

Officials said they expect up to 60 per cent voter turnout because all political parties were heavily involved in the buildup to the election.

Meanwhile, PML-N leader Raja Farooq Haider Khan wrote a letter to the AJK chief election commissioner, complaining that some “miscreants” were harming the peaceful polling environment through violence at a polling station in the LA-32 constituency in order to prevent his party’s supporters from voting.

He said workers from an “opposition party” were openly displaying firearms, and alleged that some Rangers personnel deployed at the polling station were “encouraging voters to vote for their favourite opposition party”.

PML-N spokesperson Marriyum Aurangzeb also condemned the arrests of some PML-N workers by police and criticised the AJK Election Commission for allegedly refusing to accept the party’s applications regarding rigging complaints.

The PPP also complained to the AJK Election Commission, alleging that PTI workers were using force to influence the voting process.

In a letter addressed to the election commission’s secretary, PPP’s Central Election Cell incharge Taj Haider said that the chief polling agent for the LA-30 constituency was arrested “immediately after the start of polling in order to influence the election of our candidate”.

In a separate letter, Haider complained that PTI workers had “captured” the Mandol Bazaar polling station in the LA-18 constituency and “ballot papers were being stamped by them.”

In a third such letter, Haider said PTI workers “with the support of the administration are stopping PPP voters from casting votes” at the polling station located in 84 Middle School in Khyber Pakhtunkhwa’s Katiala for the LA-6 constituency.

Previously, general elections in AJK had predominantly been a contest between the local leaders of the contesting parties, with a low-profile support from their parent parties or like-minded governments in Pakistan.

However, of late these elections have become a do-or-die battle directly between the central leadership of the mainstream parties, relegating their local leadership as well as a few state-based parties to the background.

This year the pre-poll campaign has surpassed the previous records of aggressiveness towards their rivals.

From June 25 when PPP Chairperson Bilawal Bhutto-Zardari took the lead over the opponents in launching the campaign of his party from Dadyal, followed by PML-N vice president Maryam Nawaz and federal ministers Ali Amin Gandapur, Murad Saeed and PM Khan, to July 23 when the campaign ended at midnight, the electorate in AJK heard nothing but allegations, counter-allegations and usual mudslinging in rallies.

Read: AJK election campaign — Politicians talked about everything but their plans to protect Kashmiris’ rights

“They spewed venom at each other during their speeches … There was much empty rhetoric on Kashmir but no word on the myriad of issues faced by the people in Azad Jammu and Kashmir as well as their likely solutions,” commented Abdul Hakim Kashmiri, a political analyst based in Muzaffarabad.

The Election Commission has asserted that watertight security and other measures taken by it leave no room for rigging.

Farhat Ali Mir, one of the two constitutional members of the commission, told reporters on Saturday that the presiding officers were under an obligation to provide duly signed results of their stations to the agents of all contesting candidates, immediately after the counting, thus eliminating chances of results manipulation.

By Saturday evening, polling material had been dispatched to all respective stations — 5,129 in total, of which 826 had been declared the ‘most sensitive’ and 1,209 as ‘sensitive’ stations.

Results at the polling stations will be announced within an hour after the polling ends, according to the commission officials.