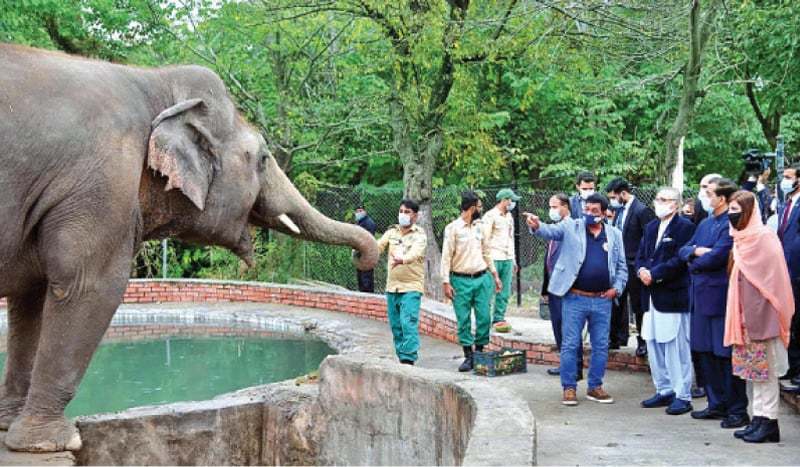 ISLAMABAD: Kaavan – the capital’s lone elephant set to leave for Cambodia on Nov 29 – was given a farewell by President Dr Arif Alvi and First Lady Samina Alvi at Marghzar Zoo on Tuesday.

The president visited the zoo a day after the citizens said goodbye to Kaavan with songs and speeches.

After living in Islamabad for 35 years, Kaavan will be shifted to a sanctuary in Cambodia following directions by Islamabad High Court (IHC) in view of its improper care due to the absence of a natural habitat at the zoo.

Speaking on the occasion, President Alvi said the judgment passed by IHC was in line with the Islamic traditions of caring for animals and keeping them in an environment best suited to them.

“Detaching young animals from their mothers is the biggest cause of their emotional distress.”

He expressed confidence that Kaavan would find happiness in Cambodia after being surrounded by its companion elephants.

He appreciated the efforts of the Ministry of Climate Change and the Islamabad Wildlife Management Board for the effective implementation of the IHC order.

He stressed the need for raising public awareness about animal rights and environmental care. The president called for the implementation of Pakistan Prevention of Cruelty to Animals Act (1890).Dr Amir Khalil, who is leading a team from Four Paws, an Austrian animal rescue organisation, in a briefing said Kaavan would be initially kept for a month at the Cambodian sanctuary to be later shifted to a 25,000 acre forest area for its free movement.

He said his organisation would move a request through the climate change ministry to the Civil Aviation Authority for a direct air route of the aircraft carrying Kaavan to cross over Sri Lanka instead of India.

Later, Four Paws spokeswoman Marion Lombard said on Nov 29 the preparations for Kaavan’s departure would start at 6am. The elephant will be sedated at 10am and shifted to Nur Khan air base by 1pm.

“It will be airlifted by a Russian cargo aircraft to Cambodia,” she said.

Equally popular among children and adults, Kaavan, the male Asian elephant born in Sri Lanka in 1985, was gifted by the Sri Lankan government to the then president of Pakistan. An elephant named Saheli was brought from Bangladesh in 1990 that remained as Kaavan’s partner until its death in 2012. Kaavan was temporarily chained by zookeepers in 2002 for its aggressive behaviour.

Animal rights activists have been campaigning to free Kaavan and to treat animals in a better way at the zoo.

On May 21, 2020, the IHC ordered that all animals, especially Kaavan, be immediately relocated to better sanctuaries.

After Kaavan, two Himalayan brown bears will also be relocated to Jordan on Dec 6, completing the process of relocation of all animals at the zoo.