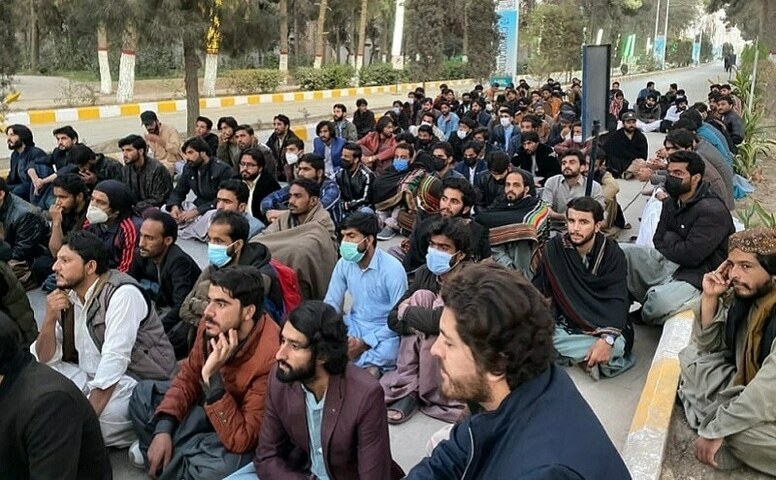 Balochistan University (BU) students announced on Friday the suspension of their days-long protest over the disappearance of two fellow students for 15 days after assurances by the provincial government that the missing students would be recovered.

However, the varsity will remain closed until the recovery of the missing students, the protesting students said.

Confirming these details, Baloch Students Organisation leader Zubair Baloch told Dawn.com that the protest would be resumed if the two missing students were not recovered within 15 days.

He also expressed the hope that the government would play its role in their recovery.

Separately, Balochistan Communications and Buildings Minister Sardar Abdul Rehman Khetran, who heads the government’s committee formed for holding talks with the protesting students, also confirmed the development during a press conference alongside BU students in Quetta.

He assured that the students’ demands would be met, adding that the university would remain shut until the recovery of their two fellow students.

The minister said the government’s negotiation committee had been holding talks with protesting students and the latter had been cooperating with them.

“Balochistan has capable students and we don’t want that the doors of education be closed [for them], given that province is already impoverished,” he added.

The students of Balochistan University had started their protest on November 7, days after two students, Sohail Baloch and Faseeh Baloch, of the varsity went missing.

On November 9, as negotiations with the authorities failed, students belonging to various factions of the Baloch Student Organisation (BSO) ​had locked the gates of the varsity and announced that no one would take semester examinations and that their protest would continue until the duo were recovered.

The government had then formed a committee on November 11 to address the students’ issues and submit their recommendations.

Later, the students had paused the demonstration on November 13, after receiving assurances from the government of the recovery of missing students by November 16.

Educational activities at the university were again suspended on November 18 as the students had resumed their protest and accused the government of reneging on its promise to recover the missing students.

BSO Secretary General Balach Qadir Baloch had told Dawn.com at the time that the government’s committee had sought another three to four days in “disregard of their earlier promise to recover the missing students by November 16”.

A day later, opposition and treasury benches in the Balochistan Assembly had expre­ssed concern over the disappearance of the two students and asked the relevant authorities to get them recovered immediately.