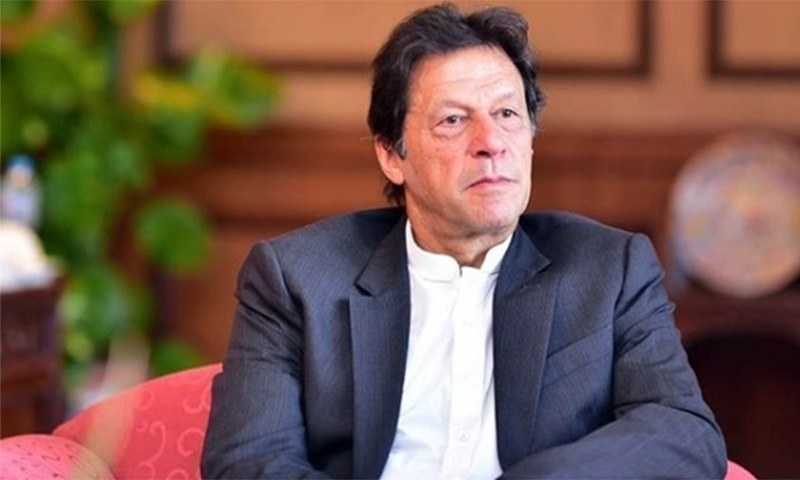 Prime Minister Imran Khan addresses participants of the reception on the lawns of PM House on Sunday.

ISLAMABAD: In an app­arent move to muster support of the ruling Pakistan Tehreek-i-Insaf (PTI) lawmakers and coalition partners for the passage of budget 2020-21 in the face of its rejection by the joint opposition, Prime Minister Imran Khan on Sunday evening hosted a dinner reception where he asserted that his government would definitely complete its five-year term.

As many as 14 MNAs belonging to the Imran-led PTI, Pakistan Muslim League-Q (PML-Q) Baloch­istan National Party (BNP-Mengal), Pakistan Awami Muslim League (PAML) did not attend the dinner held on the lawns of PM House.

PM Khan held separate meetings with the leaders of government’s allies before the reception and assured them that all their demands would be fulfilled. Also, due to the backdoor efforts of Speaker National Assembly Asad Qaiser, the missing 14 MNAs of the ruling party, including Haji Imtiaz and Nawab Karamat, turned up at the PM House after the dinner. The government allies inc­luding Muttahida Qaumi Movement (MQM), Baloch­istan Awami Party (BAP), Grand Democratic Alliance (GDA), Jamhoori Watan Party (JWP) Shah­zain Bugti and independent parliamentarian Aslam Bhoo­tani called on the premier and attended the event. All cabinet members including the advisers and special assistants to the prime minister, were also present at the dinner reception, where the guests were served with mutton handi and pulao, but Railways Minister Sheikh Rashid Ahmed, who has recently recovered from coronavirus, was conspicuous for his absence.

While addressing the participants of the reception, PM Khan said: “Some people give new date of ousting of the government with every passing day, but I assure you that we are going nowhere.

“The government will definitely complete its term.”

Responding to the allegation that the government was being run by a team of non-elected people, the prime minister said: “If we have included some non-elected members in the cabinet, they [opposition parties] had filled it with their relatives.”

Mr Khan asked the PTI leaders and all government allies to get passed the budget on Monday with a significant majority. He also talked about the recent hike in petroleum prices, corruption and coronavirus in the country.

The function concluded after the PM’s address, as no one spoke after him on the occasion.

Earlier, PML-Q president Chaudhry Shujaat Hussain announced that his party would vote in favour of the budget, but would not attend the dinner reception.

Despite all-out efforts of Speaker National Assembly Asad Qaiser and PTI chief whip in the NA Amir Dogar to convince the PML-Q leadership to send at least one representative to the reception, the ruling coalition part­ner did not attend the event apparently over some differences with the ruling PTI.

Just a couple of days ago, federal Minister for Science and Technology had spilled the beans by unveiling growing differences within the PTI ranks.

While talking to Dawn before attending the reception, Mr Amin said the MQM would demand development of Hyderabad University, uplift projects in Karachi and Hyderabad reduction in petroleum and gas prices etc.

GDA delegation was led by Minister for Inter-Provincial Coordination Dr Fehmida Mirza. She was accompanied by Saira Bano.

Another participant quoted the prime minister as saying he could rule without any hurdle if he did not expose corruption of opposition leaders.

“I could complete my term quite smoothly, if I had not exposed corruption of eight to ten people,” the premier said, adding the government would stick to its reform agenda.

Talking about probe into the recent PIA plane crash, he said the inquiry was conducted to avoid such incidents in future.

Meanwhile, Housing Minister Tariq Bashir Cheema of PML-Q hosted a dinner for his party colleagues and parliamentarians who did not attend the PM’s reception.

A PML-Q spokesman said the party skipped the PM’s reception due to some other engagements.