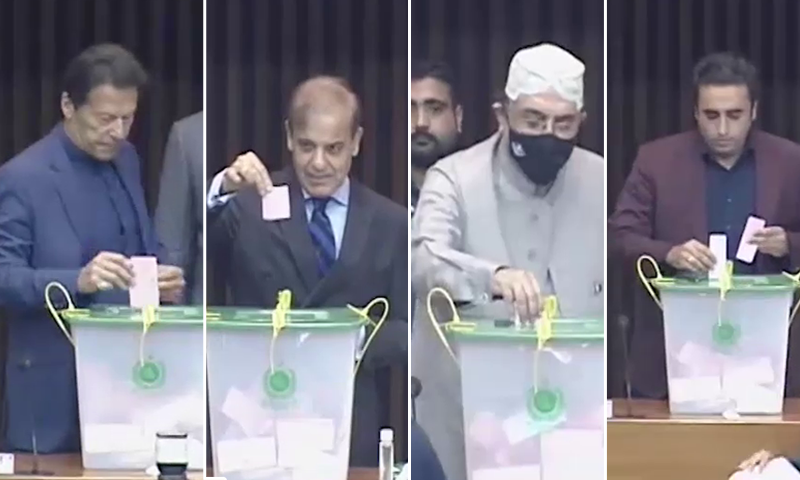 Polling for 37 high-stakes seats of the Senate concluded on Wednesday with the ruling party PTI bagging 18 new seats, including the five that had been elected unopposed, earlier in Punjab.

Meanwhile, the PPP managed to have eight new senators elected against as many who retired. The PML-N, as expected, lost ground and managed to clinch only the five new seats that it had earlier won uncontested in Punjab, against 17 of its senators who retired.

Another party that managed to gain ground was the Balochistan Awami Party — an ally of the ruling PTI — which secured six more seats against three of its senators who retired, swelling its ranks to 13 in the Senate.

Voting was held smoothly under the supervision of the Election Commission of Pakistan (ECP) with a total of 78 candidates contesting from Sindh, Khyber Pakhtunkhwa, Balochistan and Islamabad.

After Gilani was declared the winner, he was seen shaking hands and walking on the Senate floor with Shaikh. “I would like to thank the PDM (Pakistan Democratic Movement),” said Gilani at a press conference in the evening alongside PPP chairperson Bilawal Bhutto-Zardari. “This win is a win for democracy.”

The first Senate hopeful to be declared a winner on a general seat was independent candidate Abdul Qadir from Balochistan.

Following candidates are among the winners, as per unofficial and unverified results:

Polling continued until after 5pm in the KP Assembly, where the ECP allowed lawmakers already inside the legislature to cast their votes. Polling did not take place on Wednesday in Punjab where all Senate candidates were elected unopposed last month after disqualification or withdrawal of papers by other contestants.

The polling started at 9am and continued till 5pm without any break. ECP staff reached the Parliament House in Islamabad early morning on Wednesday. The campaign for this year’s election ended at midnight on March 3.

In the National Assembly, the first vote was cast by PTI’s Shafiq Arain, while the second one was cast by federal Minister for Water Resources Faisal Vawda.

Voting took place through secret ballots after a long-drawn open ballot controversy kept the ruling and opposition parties engaged in a war of words as well as a legal battle before the much-awaited Supreme Court decision.

Lawmakers gather in National Assembly to cast their votes for Senate seats on Wednesday.

Meanwhile, the vote of PTI lawmaker and Chairman of the Parliamentary Committee on Kashmir Shehryar Khan Afridi was feared to have been rendered invalid after he signed his ballot paper. He later submitted a request to the ECP presiding officer seeking permission to recast his vote.

In the application, Afridi stated that he had been “feeling unwell for past few days” and couldn’t attend party meetings for preparation for the Senate polls. “When I approached you to cast my vote I asked you and your staff but they failed to guide me. Later, I put my signature on the ballot papers instead of putting numbers,” he said while addressing the presiding officer, requesting permission to recast his vote. A decision on his application will be announced later.

Extra security had been deployed outside assemblies for polling day.

The Senate — the upper house of parliament — was, until recently, a body of 104 lawmakers. Each serves a term of six years, barring resignation, disqualification, or other extraordinary circumstances. They are not all elected at the same time: rather, half are elected at one time, and the other half three years later.

In 2021, 52 senators (who were elected in 2015) are set to retire. The other 52 were elected in 2018 and will retire in 2024. However, elections were being held only on 48 seats this time after erstwhile Federally Administered Tribal Areas (Fata) were merged with KP.

Therefore, the Senate will now comprise 100 lawmakers; 23 each from all the provinces and four from Islamabad. The remaining four senators from Fata will retire in 2024.

The 23 seats allocated to a province comprise 14 general seats, four reserved for women, four for technocrats and one for minority member.

Earlier, all Senate candidates from Punjab were elected unopposed after major political parties — PTI, PML-N and PPP — agreed to withdraw candidatures of some of their respective hopefuls. As a result, out of the 11 seats, five each went to the PTI and the PML-N and one to the PML-Quaid, an ally of the PTI.

Read | Untangling the mystery: All you need to know about Senate elections

The ECP, in its code of conduct, had barred President Dr Arif Alvi and the governors of all the provinces from taking part in the election campaigns.

It had also instructed all candidates to open exclusive accounts for their election expenses and to make all transactions through it. They will have to submit their return of election expenses to the returning officer on Form C within five days from the date of election.

The Senate election is held through secret voting on the basis of single transferable vote through “preference voting”. All four provincial assemblies are electoral colleges for the four respective assemblies.

There are 371 total seats in Punjab Assembly; however, only 368 are currently occupied. Of these, 181 are occupied by members of the PTI, 165 by PML-N members, 10 by PML-Q members, 7 by PPP members, 4 by independent lawmakers, and one by a member of the Pakistan Rah-e-Haq Party.

The total number of seats in the Balochistan Assembly is 65 but currently 64 seats are occupied. Of these, 24 are BAP members, 10 BNP, 10 MMA, 7 PTI, 4 from the ANP, 3 BNP-A, 2 Hazara Democratic Party, one each from the PML-N, PkMAP and Jamhuri Watan Party, and one independent member.

There were a total of 78 candidates contesting the 2021 Senate elections from the federal capital and the three provinces.

Those who were elected to the upper house of parliament from Punjab include Saifullah Sarwar Khan Nyazee, Aon Abbas, Ejaz Ahmad Chaudhry and Syed Ali Zafar of the PTI, Prof Sajid Mir and Irfanul Siddiqui of the PML-N, and Kamil Ali Agha of the PML-Q.

The PTI had no candidate for the Senate from Balochistan. Candidates from other parties included Balochistan Awami Party (BAP) founder Saeed Ahmed Hashmi and Sajid Tareen of the Balochistan National Party-Mengal (BNP-M).

Allegations of horse-trading are present during every Senate election but this year’s polls were marred by controversies over the method of voting as the government sought to hold them through open ballot while opposition parties rejected the idea.

The ruling PTI filed a reference in the Supreme Court asking for its opinion on whether the elections could be held through open ballot, promulgated an ordinance, and introduced a constitutional amendment bill in the National Assembly, all just weeks before the polls were to take place.

On Monday, the Supreme Court announced that Senate polls would be held through secret ballot under Article 226 of the Constitution. A day later, the ECP said that this year’s election would be “conducted as provided in the Constitution and law as per past practice“.

Number of votes required to be elected to a General seat.

Correction: An earlier version of this story incorrectly stated that PPP’s Farhatullah Babar had won a Senate seat. The error is regretted.

With additional reporting by Fahad Chaudhry in Islamabad, Imtiaz Ali in Karachi, Sirajuddin in Peshawar and Ghalib Nihad in Quetta.