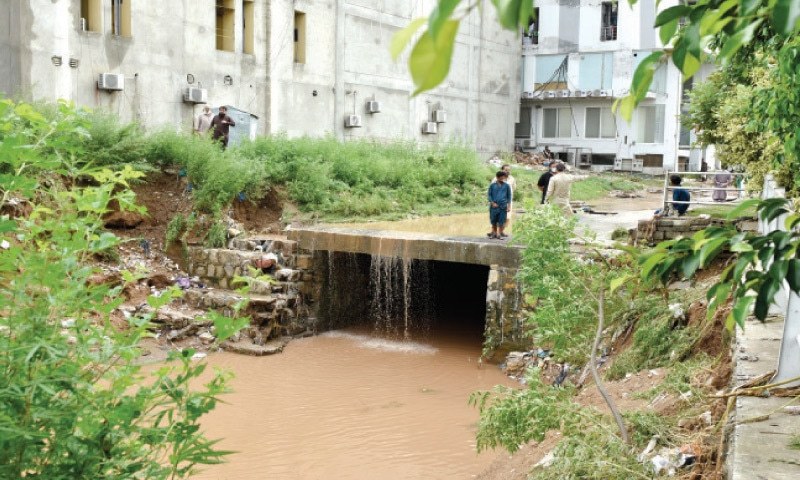 ISLAMABAD: A private housing society in alleged connivance with Capital Development Authority (CDA) and Islamabad administration not only reduced the size of the natural stream in E-11/2 but also altered natural flow of the water way, which caused urban flooding after the heavy rain on Wednesday.

Old satellite images taken in 2002 and in 2008 showed the zigzag nullah entering E-11. However, later on, in 2010-12, alignment of the nullah was made straight by the society in street number 2, where a mother and her child drowned when gushing water entered their basement.

The nullah starts from the Margalla Hills after crossing sector D-12 and E-12 enters E-11. In D-12 and E-12, the width of this stream is seemingly over 70 feet, but all of sudden, when it enters E-11, it squeezes down to 15 to 18 feet. On Wednesday, during heavy rainfall, a bottleneck was created in the stream, which caused flooding.

On the other hand, the society after realigning the nullah also covered it by building a road and carved out residential and commercial plots along its bank to earn millions of rupees. However, government departments concerned – CDA and office of ICT Registrar Cooperative – did not take any serious action to stop this illegal construction.

Encroachments on storm water drains cause obstruction in flow of rainwater, DC says

Earlier, in 2010-12, the society got a layout plan approved from the CDA and merely on this basis, before getting a no-objection certificate (NOC), it kept selling plots and construction was carried out unabated. Late on, some years ago, the CDA cancelled approval of the layout plan, but it was too late.

“A committee under the chairmanship of DC Islamabad has already been formed, which is probing the matter. The management of the society is answerable for starting construction without getting NOC from the CDA,” said CDA’s Public Relations Officer Syed Asif Shah.

Federal Minister for Planning, Development and Special Initiatives Asad Umar, who is also a local MNA, presided over a meeting to discuss all legal and illegal constructions on storm drains in E-11 besides other issues of housing societies and their solutions on Thursday.

According to a statement issued by the Planning Commission, the DC apprised participants of the meeting that most residential societies in E-11 have constructed illegal encroachments on storm water drains which are causing obstructions in the flow of rainwater. These societies have also carried out illegal construction on green belts and play parks, he added.

Mr Umar directed the DC to identify legal and illegal constructions on all storm drains of E-11 and prepare a formal plan by next week to demolish the encroachments.

He said if the encroachments were not demolished, floods would occur in the rainy season every year and lives of the residents of the area would be in danger. The planning minister also directed the CDA to identify space for a graveyard for E-11 and pinpoint encroachments on green belts and grounds so that action could be taken against them.

Earlier, Special Assistant to Prime Minister on CDA Affairs Ali Nawaz Awan also visited the family of Kashif Bajwa, whose wife and son died when flood water entered their basement. He assured to extend full support to the victim’s family.