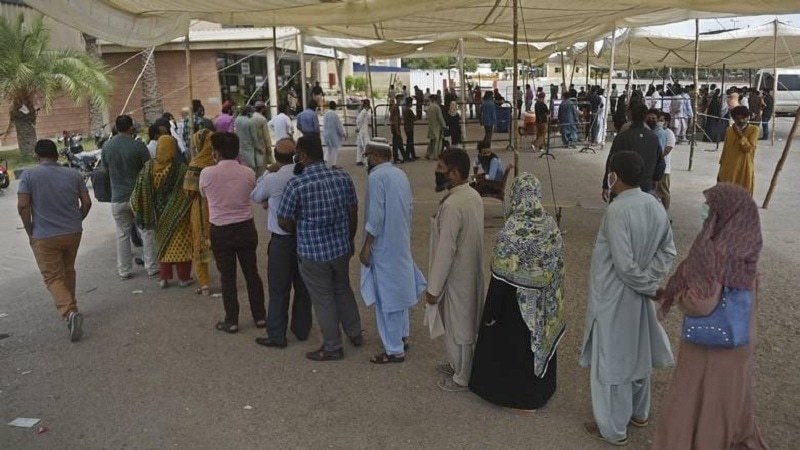 The Sindh government on Sunday declared 11 Covid-19 vaccination centres in six districts of Karachi as “mass vaccination facilities” that will operate round-the-clock throughout the week to prevent overcrowding at two mega vaccination points — the Expo Centre and Khaliqdina Hall.

The decision was notified after the vaccination centres at the Expo Centre and Khaliqdina Hall were overrun by a horde of people for the second consecutive day on Sunday.

Two incidents of chaos were reported at vaccination centres in the Old City Area, Lyari and some areas on the outskirts of Karachi, according to police.

Chakiwara police station Station House Officer Abdul Ghaffar Shah said a scuffle broke out at the Lyari General Hospital where a huge crowd turned up for vaccination on Sunday.

According to the officer, the incident involved visitors and the security staff of the area’s major hospital. He said police immediately intervened to prevent the situation from deteriorating further.

The SHO, however, denied reports that police baton-charged residents who had arrived there. He clarified that some people who were seen in a video circulating on social media hitting the people with sticks were “security guards” of the hospital and not police personnel.

He confirmed that another incident was reported from a vaccination centre in the Gadap area, where people resorted to protest after vaccines reportedly went out of stock at the facility.

Sindh chief minister’s spokesperson Murtaza Wahab said on Saturday that the provincial government had employed a “tactic” to persuade people into getting themselves vaccinated against Covid and in this regard, it was decided to block mobile SIMs of unvaccinated people.

He said the vaccination ratio had increased exponentially after four days of the announcement.

Vaccination facilities being set up at mosques, imambargahs

Meanwhile, Sindh Chief Minister Murad Ali Shah has directed deputy commissioners across Karachi to set up more vaccination centres in their respective districts, while inoculation facilities are also being set up at mosques and imambargahs, according to Rasheed Channa, spokesperson to the provincial chief executive.

Speaking to Dawn.com, Channa revealed that the chief minister was also considering a proposal to set up a drive-through vaccination facility along the route of the Green Line BRT.

He said that “earlier, people were not getting vaccinated but now due to lockdown they got the time to get the jabs.”

He added that people overrunning the Expo Centre was “not an issue” because the facility had “ample space and it’s in the open air”.

“The government feels that people are making the most of the lockdown [in terms of vaccination],” Channa said.