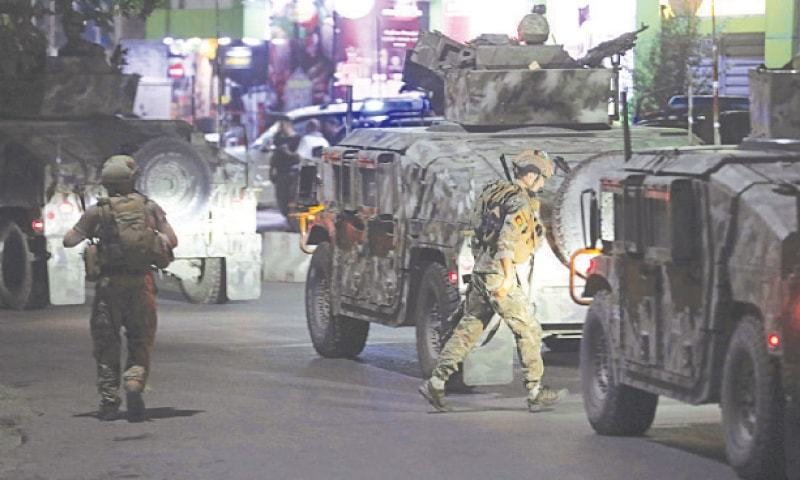 KABUL: The Taliban pressed ahead with their advances in southern Afghanistan on Tuesday, capturing nine out of 10 districts of the Helmand provincial capital, residents and officials said.

Afghan government forces launched air strikes, backed by the US, in a desperate effort to defend the city of Lashkar Gah.

The Afghan forces commander for Helmand, Gen Sami Sadat, in an audio message shared with journalists on Tuesday urged residents in neighbourhoods captured by the Taliban to evacuate immediately, though he did not clarify how they could do that amid the ongoing clashes. The message was an indication more air strikes were planned.

“Please evacuate your families from your homes and their surroundings,” Sadat said. “We will not leave the Taliban alive. … I know it’s hard … we do it for your future. Forgive us if you get displaced for a few days, please evacuate as soon as possible.”

Lashkar Gah is one of three provincial capitals under siege by the Taliban as they stepped up their onslaught against government forces.

The fall of Lashkar Gah would be a major turning point in the offensive the Taliban have waged over the past months as US and Nato forces complete their pullout from the war-torn country. It would also be the first provincial capital captured by the Taliban in years.

Residents of the city said the fighting has them trapped, hunkered down inside their homes and unable to step out for basic supplies. They said Taliban fighters were out openly in the streets, and that all but one Lashkar Gah district was under Taliban control.

Elite commando units were dispatched from Kabul to aid Afghan forces as the government held on to key government buildings, including the local police and army headquarters.

Majid Akhund, deputy chairman of the Helmand provincial council, confirmed that the Taliban control nine Lashkar Gah districts and also the city’s TV and radio station, which had both gone off the air.

In recent months the Taliban swept through dozens of districts across the country, many in remote and rural, sparsely populated areas.

Afghan troops in those battles often surrendered or pulled out with barely a fight, frequently lacking re-supplies and reinforcements. Over the past weeks, the Taliban have also captured several lucrative border crossings with Iran, Pakistan and Tajikistan.

Most recently, the Taliban have turned their guns on provincial capitals as the withdrawal of the US and Nato forces, is now more than 95 per cent complete. The final US and Nato soldier are expected to be out of Afghanistan by Aug 31.

The two other provincial capitals under siege are in the neighboring province of Kandahar, also in the south, and in western Herat province.

In Herat, the capital of the province by the same name, Afghan forces appeared on Tuesday to be able to push the Taliban back, with the insurgents on the edge of the city. Also, Herat city’s civilian airport re-opened.

The UN mission appealed for a quick end to the fighting in heavily populated urban areas.