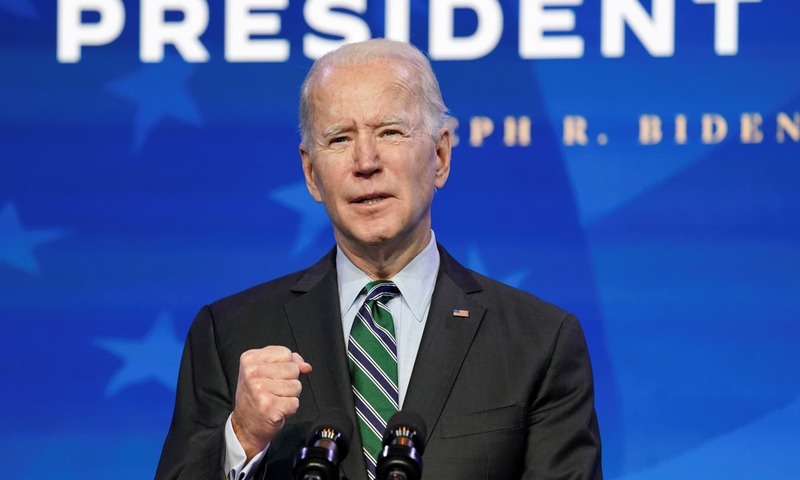 Here’s where the Democratic president stands on key issues.

With decades of political experience under his belt, Joe Biden, who took oath on Wednesday as the 46th president of the United States, has made it to the top American political office in his third attempt.

Born in Scranton, Pennsylvania state, the 77-year-old began his political career in 1972, when he was first elected to the US Senate from Delaware state. The new president has considerable experience in foreign policy and was the chair of the Senate Foreign Relations Committee twice in his career. He has also served as the chairperson of the Committee on Judiciary.

Though long and distinguished, Biden’s career is certainly not stain-free. He has faced criticism for sponsoring the Violent Crime Control and Law Enforcement Act of 1994, which critics say led to the mass incarceration of African Americans.

The former vice president is also no stranger to personal loss and tragedy. In 1972, he lost his wife and baby daughter in a car accident soon after he won his first seat in Senate. His sons Beau and Hunter survived and Biden swore his oath while in the hospital with his sons.

In 2015, when Biden was vice president, his son Beau died from brain cancer. He was 46 and had started off a career in politics.

Biden first ran for president in 1988 but withdrew from the race after it was revealed that he had plagiarised a speech from Neil Kinnock, then leader of the British Labour Party.

He tried his luck once again in 2008 but was unsuccessful this time too as the Democratic Party nominated Barrack Obama. Biden was later nominated for the position of vice president and served alongside Obama for the next eight years.

Biden, who mocks Trump’s ‘America First’ slogan as ‘America Alone’, aims to restore the country’s position as a global leader.

Here we take a look at Biden’s stances and proposed policies on vital issues that not only concern the US but the rest of the world.

Biden is openly critical of the policies adopted by the Trump administration on immigration and has vowed to change or reverse several policies which he says are “cruel and senseless” and have led to the separation of several families at the US borders.

He plans to unveil a sweeping immigration bill on day one of his administration, hoping to provide an eight-year path to citizenship for an estimated 11 million people living in the US without legal status, a massive reversal from the Trump administration’s harsh immigration policies.

In this photo taken on January 29, 2017 people gather at Copley Square in Boston, Massachusetts to decry US President Donald Trump’s sweeping executive order, which restricted refugees and travellers from seven Muslim-majority countries. — AFP/File

A policy paper on immigration posted on Biden’s election website states: “Immigration is essential to who we are as a nation, our core values, and our aspirations for our future.”

Some of the areas that Biden has promised to work on include:

Increasing annual global refugee admissions cap to 125,000 in his first year in office. Trump recently announced the admissions would be capped at 15,000 in 2021 — the lowest in history

Biden has not yet stated what policy he would adopt towards South Asia. His nominated defence chief Gen Lloyd J Austin has said the Biden administration sees Pakistan as an “essential partner” in any peace process in Afghanistan and believes that “continuing to build relationships with Pakistan’s military will provide openings for the United States and Pakistan to cooperate on key issues”.

Biden’s stance on Pakistan in the past may also provide some clue to his approach towards the country as well as the region.

In 2007 he termed Pakistan “potentially the most dangerous country in the world”.

During his campaign for vice president in 2008, Biden had reiterated the position, saying “I promise you, if an attack comes in the homeland, […] it is going to come from Al Qaeda planning in the hills of Afghanistan and Pakistan.”

US drone attacks on Pakistan saw a 631 per cent increase during the Obama administration, of which Biden was an integral part as the vice president.

More on this: US drone strikes in Pakistan see 631pc increase under Obama

Former US President Barack Obama with Joe Biden after his election-night victory speech in Chicago on November 6, 2012. — Reuters

His past stance aside, shifting dynamics in South Asia would also impact Biden’s foreign policy, if he is elected president. Unlike Trump, Biden has said that while he would reduce the number of combat troops in Afghanistan, he would not withdraw US military presence.

Last year, during a debate between Democratic presidential candidates, Biden had said: “We can prevent the United States from being the victim of terror coming out of Afghanistan by providing for bases — insist the Pakistanis provide bases for us to air lift from and to move against what we know.”

Analysts believe that the US may get closer to India in order to counter China’s growing influence in the region, which would, in turn, impact Washington’s relations with Islamabad — one of Beijing’s closest allies.

India, which maintained a neutral stance until it got involved in a conflict with China at the disputed border in Ladakh earlier this year, would probably welcome closer relations with the US.

At the same time, Biden’s open condemnation of Indian actions in occupied Kashmir post-August 5, 2019, the passage of the discriminatory Citizenship Amendment Act (CAA) and treatment meted out to the Muslim population has probably annoyed India as much as it pleased Pakistan. A policy paper on his agenda for Muslim-American communities, published on his election website, said that Biden was “disappointed” by New Delhi’s implementation of the National Register of Citizens and passage CAA.

Take a look: A Biden-Harris Administration Would Mean a Harder Eye on Kashmir

With regards to occupied Kashmir, Biden’s policy paper stated: “Indian government should take all necessary steps to restore rights for all the people of Kashmir. Restrictions on dissent, such as preventing peaceful protests or shutting or slowing down the Internet, weaken democracy.”

In August, Biden campaign’s foreign policy adviser Antony Blinken had said that the Democratic nominee will raise the Kashmir issue with India.

The former vice president has denounced Islamophobia, which he says “far too often overshadow(s)” the contributions of Muslim-Americans and has promised to “work closely” with the Muslim community and address its “legitimate concerns”.

US Democratic presidential candidate Joe Biden speaks about responses to Covid-19 at an event in Wilmington, Delaware, US on March 12, 2020. — Reuters

In his Agenda for Muslim-American Communities, Biden acknowledged the challenges faced by Muslims in the US and has listed the areas he would work on. These include:

Confronting Islamophobia “head on” and honour contributions by Muslim community

Ensuring provision of basic rights, including that of worship to prisoners, including Muslims and helping in rehabilitation

Speaking out against rights violation of Muslim communities across the world including discrimination against Uyghur Muslims in China, Rohingya Muslims in Myanmar and Kashmiris in Indian-occupied Kashmir.

It is also pertinent to remember that the Obama administration, in which Biden served for eight years, has little to show for its efforts to combat anti-Muslim sentiment.

In its eight years in government, the Obama government rained down bombs on Iraq, Syria, Libya, Afghanistan, Pakistan, Yemen and Somalia — all Muslim-majority countries. In 2016 alone, US dropped at least 26,171 bombs.

Drone strikes under the Obama administration were much more frequent than they were under the Bush government, which started the so-called ‘War on Terror’. Not only did it fail to end wars in Afghanistan and Iraq, Obama’s government led military intervention in Syria, Libya and Yemen, all of which have led to a destabilised Middle East and arguably led to the rise of the militant Islamic State group.

According to some reports, however, Biden had urged then President Obama not to intervene in Libya or threaten Syria with retaliation for using chemical weapons.

Biden does not agree with Trump’s plan for a full military withdrawal from Afghanistan. More than once during his campaign, the former vice president has said that the US needed to ensure that terrorist outfits including Al Qaeda and IS do not gain a foothold in Afghanistan instead of nation-building.

He has promised to:

“There’s no possibility to unite that country, no possibility at all of making it a whole country,” he had said about Afghanistan in a debate between Democratic presidential nominees in February.

Biden’s policy for Israel and Palestine promises something for both parties — aid for Palestinians and increased defence for Israel.

In a policy paper regarding Israel and the Jewish community, Biden vowed to:

Oppose all efforts to “delegitimise Israel on the global stage” including the Boycott, Divestment and Sanctions movement which, according to Biden “singles out Israel”

In a separate policy paper regarding his plan for Muslim-American communities, Biden said that he would “continue to oppose Israeli settlement expansion”, adding that he has spoken out against Israel’s annexations in the West Bank.

He also promised to reopen a US Consulate in East Jerusalem, which was shuttered by Trump’s government in 2019. He has not clarified if he will reverse Trump’s decision to open the US embassy in Jerusalem.

Unlike Trump, Biden identifies climate change as a grave threat to the US as well as the world and has vowed to stand by “science, not fiction”. Among the several measures that Biden has said his administration would take to counter climate change on a global scale, he has specifically named two countries that his government would stop from harming the environment: China and Russia.

According to the climate plan posted on his election website, Biden will:

Like Trump, Biden promises to promote local industry and manufacturing and though he has criticised the incumbent US president’s policies, his own do not come across as very different. In his policy for international trade, Biden has promised to take the following measures:

A “claw back” provision demanding businesses that relocate from US to another country, to pay back public investments and tax benefits

The former vice president has not clearly stated if he would end tariffs imposed by the current administration on China. Analysts expect that at least some of the tariffs would stay in a Biden administration.

Biden’s stance towards Russia is expected to be aggressive, unlike Trump’s. As for China, analysts expect Biden’s policies to be similar to Trump.

Though he has not specifically stated his policy concerning relations with US arch-rival Russia or China, the countries have been mentioned in various policy papers on Biden’s election website, including those on climate change and trade.

If elected president, Biden would:

Ensure Russia does not militarise the Arctic region

Biden has heavily criticised Trump’s response to the novel coronavirus that has so far infected more than eight million American citizens and killed more than 225,000. US is the worst-hit country by the virus, with the highest number of cases as well as deaths.

Democratic US presidential candidate and former Vice President Joe Biden is seen wearing a face mask amid the Covid-19 pandemic, in New Castle, Delaware, US on May 25, 2020. — Reuters via Al Jazeera

In a new, detailed plan to cope with the health crisis posted on his election website, Biden has promised to:

Expand testing facilities and ensure that more people have access

Adopt a global approach for developing a vaccine

Protect the elderly and high-risk population