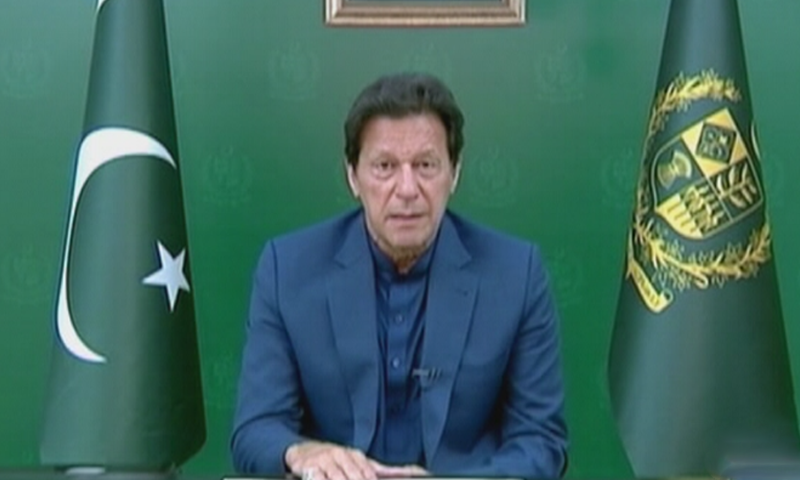 Prime Minister Imran Khan on Monday said although his government and the recently proscribed Tehreek-i-Labbaik Pakistan (TLP) had the same goal to end incidents of blasphemy around the world, their methodologies to deal with the issue were different.

In a televised address to the nation, the premier referred to the violence perpetrated by TLP activists over the last week after their leader’s arrest and the ensuing government crackdown as “regrettable” incidents.

“Our country is the only one which was founded in the name of Islam, what was its slogan? ‘Pakistan ka matlab kia, La Ilaha Illallah’,” he said.

Prime Minister Imran said the Holy Prophet (PBUH) lived in the hearts of the people of Pakistan. “That is why whenever any disrespect is attempted to his name anywhere in the world, it hurts us,” he added, saying Muslims around the world are also pained by such acts.

Speaking about the events of the past week, he said “It appeared as if one party loves the Prophet (PBUH) more than other Pakistanis.

“I assure you that the purpose of the TLP for which they’re bringing people out, that is my purpose as well and that of my government,” he added.

Imran said like the TLP, the government too wanted that there was no blasphemy against the Prophet in any country.

“Only our methods are different,” he said, noting that while the TLP wanted the French ambassador to be expelled and Pakistan’s relations to be severed with France, his government had adopted a different strategy.

He continued: “Around 1990, Salman Rushdie wrote a book in which he disrespected our Prophet.
The public came out on Pakistani streets, the American embassy was attacked and people were martyred too.

“After that, you can see [in history] that after every few years, someone in any Western country does blasphemy against him. Muslims are hurt, there are reactions abroad too and demonstrations here in our country as well but the same process continues after every few years.”

“Has this approach made any difference?” the premier asked, saying the TLP was protesting in the manner seen in the past as well.

“Now, I ask will sending the French ambassador back and cutting off all ties with them stop this?
Is there any guarantee that no one will commit blasphemy after that?” he said.

The prime minister said even if Pakistan took steps against France, the same disrespect could be done in any other European country “in the name of freedom of opinion”.

“There they’ve made it an issue of freedom of expression and on that basis, they will also commit blasphemy [if we take action against France]. So will we send the ambassador [of that country] back too?”

He noted that no such demonstrations or demands to expel the French envoy were seen in other Muslim countries. “So firstly, this will have no effect on France but let me tell you what difference it will make to Pakistan.

“The biggest effect will be that after great difficulty our economy is rising, the large-scale industry is getting up after a long time, people are getting jobs, wealth is increasing in our country, our exports are rising and after a long time, our rupee is strengthening. If we send the French ambassador back and end relations with them then this means we will break relations with the European Union,” he explained.

Half of Pakistan’s textile exports are to the EU, the premier noted, and if they are discontinued, it will result in unemployment and the closure of factories in the country. Because textile is the country’s primary export sector, it will also put pressure on the rupee and give rise to inflation and poverty.

“So the loss will be ours, not of France,” Imran emphasised.

He said his government had been engaged with and explaining the same to the TLP for the past two-and-a-half months. He added that although the government had agreed to their demand to take the matter to the National Assembly, “we saw that they were mobilising and preparing to come to Islamabad.

“Even as talks were continuing, it emerged that they have already announced that they will stage a sit-in in Islamabad if the French ambassador is not expelled. That is what broke off the talks and they were arrested,” he added.

Detailing the losses incurred by the country during the TLP protests last week, Prime Minister Imran said 40 police vehicles had been burnt, damage worth tens of millions of rupees had been caused to people’s private property, and four policemen had been martyred and more than 800 injured.

He further said the blockage of nearly 100 roads when the protest started had prevented oxygen cylinders from reaching Covid-19 patients, resulting in their deaths.

“And then Pakistan’s enemies jumped in from abroad. From the 400,000 tweets we have analysed so far, 70 per cent were from fake accounts,” Imran added. “We got to know that there were 380 Indian groups which were circulating fake news through Whatsapp that a civil war has broken out in Pakistan.”

He said subsequently political parties such as the JUI-F got involved in the matter to “somehow destabilise the government and cause harm to the country”.

Referring to the PML-N’s criticism of the government, Imran said: “When Salman Rushdie wrote his book, Nawaz Sharif had become the prime minister for the first time. How many statements did he give? How many times did he condemn [Rushdie] at any forum?”

The prime minister then recalled his government’s efforts to deal with the issue of blasphemy, an approach he presented as a counterview to that of the TLP.

He said he had spoken about Islamophobia first at the 14th summit of the OIC in June 2019 and proposed a joint Muslim world plan to stop incidents of blasphemy, and later raised the same at the UN General Assembly in September that year as well as the 2020 UNGA.

The premier said he had also written to Facebook CEO Mark Zuckerberg on “how Facebook shouldn’t be used for Islamophobia”.

And when blasphemous caricatures were published in France, he said, “I wrote a letter to all Muslim heads of state and proposed that we take joint action on this issue.”

“[My] strategy is that we heads of Muslim countries together tell Western forums such as the UN and the EU that why we are hurt when they disrespect our Prophet in the name of freedom of speech. Because they don’t understand this in the West, they don’t have the kind of love and adoration for their prophets as we do.

“That is why we will have to explain to them and when we heads of state of the Muslim world talk collectively as a group, it will have an effect,” he stressed.

The premier’s address to the nation comes at a tense time as the government engages with the workers of the TLP — who have been holding anti-France protests for more than a week — after a clash with the police in Lahore on Sunday.

The TLP has put forth four demands: the expulsion of the French ambassador over President Emmanuel Macron’s explicit backing of blasphemous cartoons, the release of party chief Saad Rizvi, the removal of the ban on the party and the release of activists arrested as well as the FIRs against them to be revoked.

A day earlier, the city of Lahore became a battleground as workers of the recently proscribed party and policemen clashed. TLP workers also took 11 policemen hostage, who were later released after the first round of talks with the government.

The second round of talks was due to be held after sehri, Interior Minister Sheikh Rashid said.

Earlier today, while addressing a ceremony in Islamabad, Prime Minister Imran lamented that political and religious parties in Pakistan “misused” Islam to deal damage to the country itself — in an apparent reference to the banned TLP’s week-long protests.

“ln our country it is a great misfortune that many times our political parties and religious parties use Islam wrongly and use it such that they deal damage to their own country.”

The prime minister said that violent actions did not benefit Islam in any way and no loss was dealt to the country in which the blasphemous act was committed. Instead, only Pakistan suffered a loss, he said.

He vowed to introduce a campaign that would seek to join Muslim countries so that the issue can be taken up on international forums, such as the European Union and United Nations.