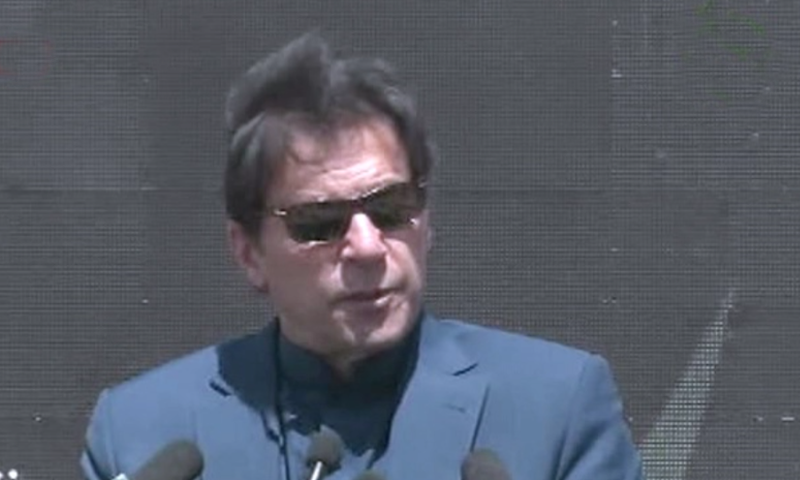 Prime Minister Imran Khan lamented on Monday that political and religious parties in Pakistan “misused” Islam to deal damage to the country itself and said he had started a campaign which joined together heads of state of Muslim countries to present the case for honour of the Holy Prophet (PBUH) on international forums.

Addressing the groundbreaking ceremony for the Margalla Highway in Islamabad, the prime minister said: “ln our country it is a great misfortune that many times our political parties and religious parties use Islam wrongly and use it such that they deal damage to their own country.”

He said that the people of Pakistan loved the Holy Prophet (PBUH) and nowhere in any country had he seen “the kind of attachment with religion and love for Prophet (PBUH) as in our country”.

“So I am saddened that many times this love is misused. Does the government not worry about this? That when there is disrespect of Holy Prophet’s (PBUH) honour then aren’t we pained?” he questioned, adding that who could decide how much or how less someone loved the Holy Prophet (PBUH).

The premier’s comments come after recent violence in the country by the now proscribed Tehreek-i-Labbaik Pakistan (TLP) against the arrest of their leader Saad Hussain Rizvi.

On Sunday, TLP workers took 11 policemen hostage after an attack on a police station in Lahore. The officials were released early on Monday after the first round of talks with the government.

The prime minister said that such actions did not benefit Islam in any way and no loss was dealt to the country in which the blasphemous act was committed. Instead, only Pakistan suffered a loss, he said.

He vowed to introduce a campaign which would seek to join Muslim countries so that the issue can be taken up on international forums, such as the European Union and United Nations.

He said that there will come a time when people in Western countries will think twice about disrespecting the Holy Prophet (PBUH).

“When we begin a campaign by bringing together all Muslim countries […] it will make a difference and change will come in the West. Otherwise we will continue vandalising the country and it will make no difference to the Western world.”

The premier said that through this campaign, a permanent solution would be found to the issue so that no one sitting abroad can insult the honour of Holy Prophet (PBUH).

On Saturday, PM Imran had asked the governments of western countries to “penalise those deliberately spreading their message of hate against Muslims” by disrespecting Prophet Muhammad (PBUH) in the same way that they had “outlawed any negative comment against the Holocaust”.

Addressing the “extremists abroad who indulge in Islamophobia and racist slurs to hurt and cause pain” to the international Muslim community, the prime minister had said that Muslims “have the greatest love and respect for our Prophet PBUH” and cannot tolerate any disrespect and abuse.

He added that the “extremists” who sought to hurt Muslim sentiments by deliberately indulging in abuse and hate under the guise of freedom of speech “clearly lack moral sense and courage” to apologise to the 1.3 billion Muslims they hurt.