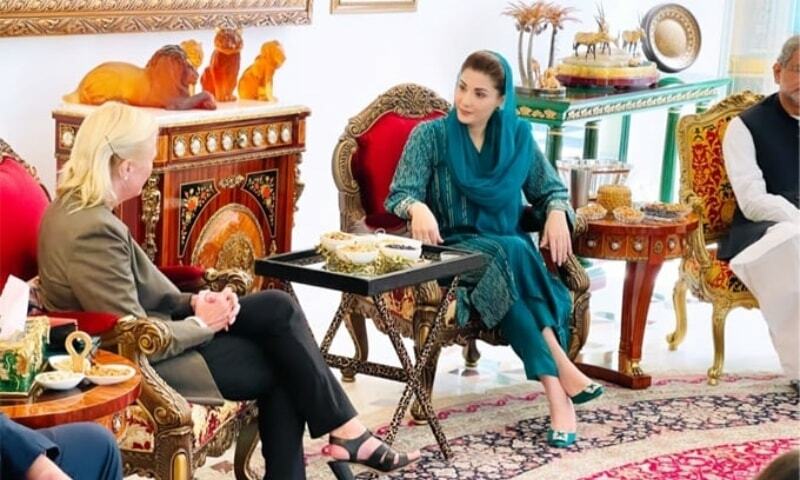 It surprised many in the party after Ambassador Aggeler separately met Mr Shehbaz and Ms Maryam despite the fact that both were present in Lahore.

Earlier, the much-talked about two ‘camps’ within the PML-N were publicly exposed when Maryam’s so-called loyalist, MNA Javed Latif, made an indirect attack on Shehbaz on a private TV channel, accusing him of being “on an assignment” from the establishment. The party issued Latif a show-cause notice, but was unable to take any action against him because of his ‘loyalty’ towards Maryam.

After her meeting with Maryam and the PML-N leaders, the US envoy met the opposition leader in the National Assembly at his Model Town residence.

Ms Aurangzeb did not respond when Dawn sought the reason for separate meetings of the US envoy with party leaders.

A party insider told Dawn that Ms Nawaz wanted to give an impression (to the US ambassador) that she represented her father (Nawaz Sharif), who was the supreme leader of the party, therefore, the senior party leadership accompanied her. “It could have been a joint meeting of Shehbaz and Maryam with Ms Aggeler, but one of the leaders chose otherwise,” the insider said.

US Consul General William K Makaneole and political officer Khatija Corey accompanied the American envoy. Matters of mutual interest, Pak-US ties, regional and international security, situation in Afghanistan, women and children’s rights, health and education and ways to boost people-to-people interaction between the two countries were discussed in both the meetings.

According to a PML-N statement, the US envoy appreciated Mr Shehbaz for the services he rendered during his tenure as the Punjab chief minister.

Maryam conveyed her father’s felicitations to President Joe Biden on his election victory and goodwill from the people of Pakistan. She said Nawaz Sharif during his tenure as the premier adopted a noninvasive foreign policy and pursued a pleasant relationship based on mutual trust, peace and development with Pakistan’s neighbours and the international community.

“Pakistan considers Afghanistan a close neighbouring country and respects its sovereignty, and does not support any interference in its affairs,” she said and added that the PML-N wished for a peaceful, developing and prosperous Afghanistan for the people, women and children of Pakistan.

Ms Nawaz said the entire world should contribute to humanitarian aid for Afghanistan. “It is imperative that a congenial environment be created that would encourage the repatriation of Afghan refugees to their beloved motherland. Pakistan sacrificed a lot in the war on terrorism. Nawaz Sharif built a narrative against terrorism and united the nation against this menace.”

Maryam further said the PML-N represented the true aspirations of the people and believed in promoting peaceful coexistence, democracy, development and security. “The PML-N wants strengthening and nurturing of democracy and democratic values, for which it sought to join forces with democratic forces of the world,” she added.

The PML-N said the American envoy acknowledged Pakistan’s sacrifices in the war against terrorism. “She appreciated Maryam Nawaz’s efforts for the rights of women, children, media, and human rights,” it claimed.

During the meeting, bilateral relations, the situation in Afghanistan and other issues of mutual interest were discussed.

Mr Elahi said the government was working hard in the field of education and appreciated the US cooperation in this regard.

Ms Aggeler said the US valued Pakistan’s role in the evacuation of Afghan refugees as it was an important strategic partner of Washington.