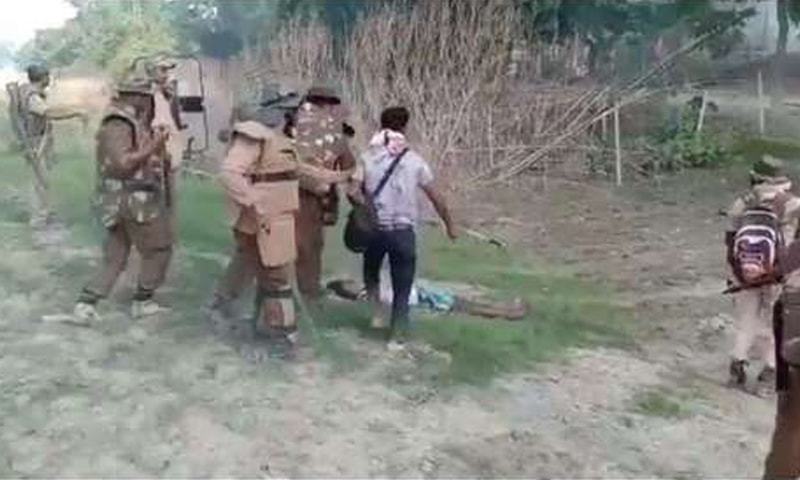 Indian authorities came under fire on Twitter after a video circulating on social media showed police opening fire on locals in the country’s Assam state before a cameraperson pounced on one of the men who had fallen motionless on the ground as a result of the attack.

The video shows armed policemen firing blindly at unseen targets behind a mass of trees. As a man comes rushing towards them, they round him, attacking him with rods and sticks. As the man collapses to the ground, apparently due to a gunshot, and is lying motionless, a cameraperson runs towards him and repeatedly kicks him and jumps on him.

According to Indian publication Scroll.in, at least two persons were reported dead in the incident that took place in Sipajhar area of Assam’s Darrang district, where most residents are Muslims of Bangla origin, during an eviction drive to remove allegedly illegal encroachments on Thursday.

Another publication, Hindustan Times, reported that the cameraperson seen in the video was employed by the district administration and had been identified by the police as Bijay Shankar Baniya.

Later, the Assam DGP tweeted that the cameraperson had been arrested.

Scroll.in quoted the Darrang Superintendent of Police Sushanta Biswa Sarma as saying that nine policemen were also injured in the incident.

The publication reported that the men killed in the incident were identified as having Muslim names. However, it was not immediately clear whether the man seen being attacked in the video was among them.

It added that the “Assam government has ordered an inquiry by a retired judge of the Gauhati High Court into the killings and the circumstances leading to the incident.”

Meanwhile, the Hindustan Times report said, Assam Chief Minister Himanta Biswa Sarma told reporters while referring to the eviction drive that “police are doing their duty… as per my information, people attacked the police with machetes, spears and other things.”

According to Scroll.in, the government had been conducting eviction drives in the area for weeks, and “most of those displaced in the process were also Muslims of Bengali origin.”

After the video of the incident was widely shared on social media following the latest action, the authorities drew strong criticism from politicians, journalists and activists on Twitter.

Pakistan’s Maritime Affairs Ali Zaidi censured Indian Prime Minister Narendra Modi for turning his country into a “barbaric state” as he shared the video on the social media platform.

“‘Incredible India’? Really? Under Hitler Modi its nothing more than a cheap slogan,” he tweeted. “He (Modi) has converted it into ‘barbaric India’. This video is apparently from Assam, where innocent villagers were shot dead in cold blood! The world must wake up before it’s too late!”

Rahul Gandhi, the leader of India’s main opposition party, expressed solidarity with the people of Assam, saying that the state was “on state-sponsored fire”.

“No children of India deserve this,” he added.