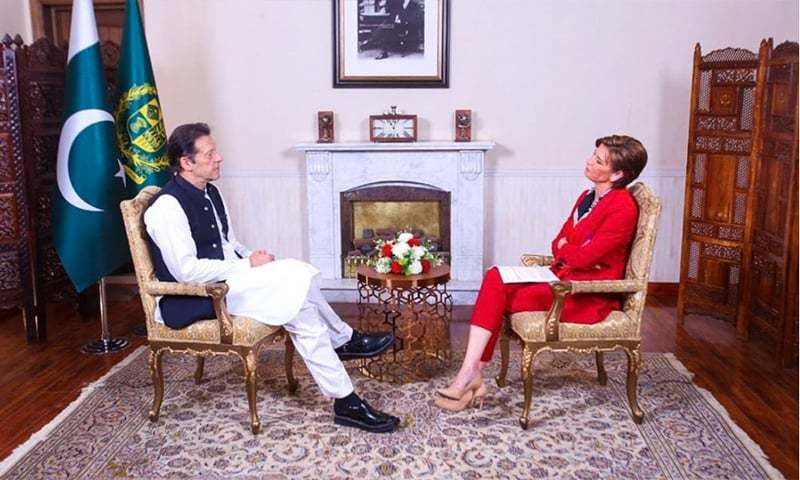 Prime Minister Imran Khan says there is a need to “incentivise” the Taliban’s new administration in order to bring the current crisis to an end, instead of trying to control Afghanistan from the outside.

In an exclusive interview on CNN programme ‘Connect the World’, host Becky Anderson asked Prime Minister Imran about apprehensions that the Taliban will not protect human rights, especially those of women and children.

“Where Afghanistan goes from here, I am afraid none of us can predict,” the premier responded. “We can hope and pray that there is peace after 40 years. That the Taliban, what they have said, that they want an inclusive government, they want women rights — in their own context, they want human rights; they have given amnesty so, so far what they have said [shows] clearly they want international acceptability.”

The prime minister said it was a “fallacy” that Afghanistan could be controlled from outside, saying history showed “no puppet government in Afghanistan is supported by the people”.

“So rather than sitting here and thinking that we can control them, we should incentivise them because this current government in Afghanistan clearly feels that without international aid and help they will not be able to stop this crisis. We […] should push them in the right direction.”

The premier said Afghanistan was currently at a “historic crossroads”, and it could see peace after four decades if the Taliban worked towards an inclusive government.

“But if it goes wrong, and which is what we are really worried about, it could go to chaos, the biggest humanitarian crisis, a huge refugee problem, unstable Afghanistan and […] the possibility of again terrorism from Afghanistan’s soil,” he added.

When pressed about concerns regarding women’s rights, Imran said it was a “mistake” to think someone from outside would give Afghan women their rights.

“Afghan women are strong. Give them time, they will get their rights,” he said. “You cannot impose women’s rights from abroad.”

‘Pakistan suffered after siding with US’

To a question, Prime Minister Imran said he had not spoken to US President Joe Biden since the collapse of the Afghan government. When asked by Anderson to confirm that Biden hadn’t called Imran since coming into office, the premier replied: “He is a busy man.”

“Pakistan is a major non-Nato ally and yet no call between you and the US president. Do you see this as punishment for supporting the Taliban while they were killing US troops?” the host asked.

Prime Minister Imran said Biden should be asked “why he is too busy to call”.

But he emphasised that Pakistan suffered greatly after siding with the US in the war in Afghanistan after 9/11, saying “at one point, there were 50 militant groups attacking our government.”

In the 80s, he said, Pakistan joined the US against the Soviets and trained the Mujahideen to do jihad against foreign occupation in Afghanistan.

“Fast forward to 9/11, US needs us in Afghanistan. George Bush asked Pakistan to help and he famously said, ‘We will not abandon Pakistan again.’ Pakistan joined the US war in Afghanistan. [If I was] the prime minister, I would never have done that,” he added.

He said after the US invasion of Afghanistan, the same mujahideen’s acts were deemed “terrorism”.

As a result, “they turned against us. Then Pashtun nationalism kicked in the entire tribal belt of Pashtuns on our side of the border,” he added.

On top of the militant groups’ violence, the premier noted, there were 480 drone attacks by the US in Pakistan — “the only time a country has been attacked by its ally”.