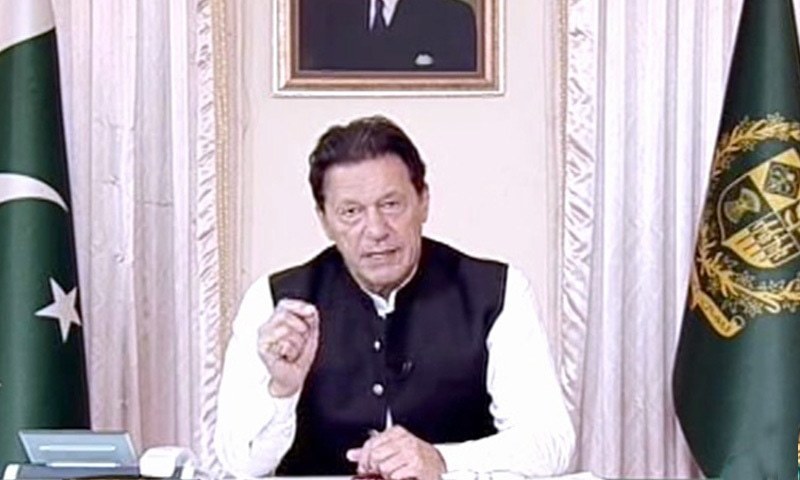 Prime Minister Imran Khan on Sunday criticised the partial coronavirus lockdown imposed by the Sindh government against the federal government’s wishes, explaining that doing so would break the back of the common man.

He expressed his views on the issue while conversing with the people of Pakistan in a live question-and-answer session via telephone.

The premier began the session by thanking the people of Pakistan for cooperating with the government over the first three waves of the Covid-19 pandemic, and urged them to again adhere to the SOPs to curb the spread of the ongoing fourth wave.

Editorial: Lockdown is far from ideal, but Sindh government’s decision is rooted in epidemiology

He then addressed the government of Sindh’s decision to impose a partial lockdown to curb rising Covid-19 cases, saying it hadn’t taken into consideration the hardships of the poor.

“We had a small problem between the federal government and Sindh,” the PM admitted. “Sindh government wanted to impose a lockdown, which is the correct decision and will curb the spread of virus.

“But on the other hand, the thing to see is that will we be able to save the economy from the lockdown? Then there is the issue of hunger … the daily wage earners and especially the poor section of our society … how will they make ends meet during the lockdown?”

The prime minister cited the example of “destruction in India” to tell Sindh government “never to impose a lockdown until you have the answers to these questions.”

“Their (Indian) government imposed a lockdown at once without thinking anything of the public. They only thought of the upper class and elite like us,” the PM said. “Sindh government should know that when you force a lockdown you are going to keep people hungry. You cannot keep hungry people under a lockdown if you do not have the resources to bring them food.”

PM Imran said that the policy of smart lockdowns and mass vaccinations was the way to go, as he stressed that the economy that has “survived very difficult times and is headed on an upwards trajectory” should not be hurt at any cost.

The first caller was a woman who told the PM that she was defrauded by a man for Rs6 million over 10 years ago, and complained that the authorities had arrested the suspect and a case filed but no recovery was ever made. To this, the prime minister instructed that her details be taken assured that full efforts would be made to assist her.

Another from a minority community called for a quota in jobs to be provided. The prime minister told her he would instruct the provinces for such quotas.

During the session, a broadcast journalist also called and told the prime minister that he wanted to verify if the QnA session was indeed genuine and live. At this, Prime Minister Imran replied that only those rulers that “break the law or believe in the rule of power rather than the rule of law or are corrupt are fearful of free media”.

“A free media [and] freedom of expression is a great blessing for a country,” the he said, adding that it was the role of media to act as a “watchdog”.

He explained he only disagreed with the media when “fake news and propaganda” was spread, referring to the revelations in the EU DisinfoLab report that uncovered an Indian disinformation network against Pakistan.

“Journalists from Pakistan are feeding fake Indian accounts that are doing propaganda against the Pakistan Army and prime minister. I only have a problem then [otherwise] real journalism and criticism is a big blessing for a country.”

The prime minister was then relayed more personal problems by two retired soldiers and a farmer. He assured them all that help would be provided to them.