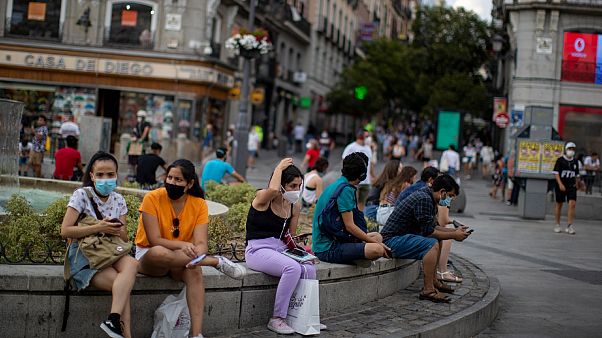 European countries have rolled out new restrictions as the World Health Organisation (WHO) said global COVID-19 cases had surpassed 30 million.

Authorities in France and the UK are both to introduce new measures to combat the spread of the virus, as cases in the counties continue to climb, while Spain is also set to announce new rules.

The British government has announced a series of local lockdowns in its worst-affected areas and from Monday, nationwide restrictions limiting social gatherings to six people or fewer will come into force in England.

Figures from the country’s Office of National Statistics showed 6,000 new cases of COVID-19 were reported every day in England during the first week of September — signalling a rise in the number of infections in recent weeks.

On Thursday, the government announced tougher restrictions in northeast England, which will affect around 2 million citizens.

People in cities including Newcastle and Sunderland will no longer be allowed to meet others outside of their homes, while bars will only be able to offer table service and entertainment venues will have to close by 10 pm.

While on Friday, Westminster said further areas in England (Lancashire, Merseyside, Warrington and Halton) are now being classed as “areas of intervention”, with measures set to come into force on Tuesday.

It also announced new local regulations in the areas of Wolverhampton, Oadby & Wigston in the Midlands, and parts of Bradford, Kirklees and Calderdale in West Yorkshire.

In France, where new cases at the weekend surpassed 10,000 each day, stricter restrictions were imposed in Marseille and Bordeaux during the week concerning beach gatherings, visiting the elderly in care homes, and public events that take place outdoors.

Citizens in fellow “red zones” Lyon and Nice were left anticipating new measures after an announcement from the country’s health minister on Thursday said local authorities had until the weekend to submit their plans for restrictions.

While Spain is also battling a resurgence of the virus, mortality levels are currently far below the totals recorded in the spring.

Madrid is once again at the centre of the outbreak, accounting for one-third of the national figure for both infections and deaths, while the WHO’s director described transmission rates as “alarming’.

Officials in the city have called for “decisive” action from the government, saying the capital was overwhelmed as one in five hospital beds is occupied by COVID-19 patients.

Madrid’s regional government on Friday announced new restrictions on mobility that will come into effect on Monday.

The measures will affect people living in “37 basic health areas” where the virus is especially prevalent — 26 of these areas are located in districts of the city and the rest are in other municipalities in the Madrid region.

Residents in these areas will be allowed in and out for essential activities such as going to school or work, or to care for dependents, president of the Community of Madrid, Isabel Díaz Ayuso, said.

Social gatherings will be restricted to six people and public parks will remain closed. The affected areas are home to around 855,193 people.