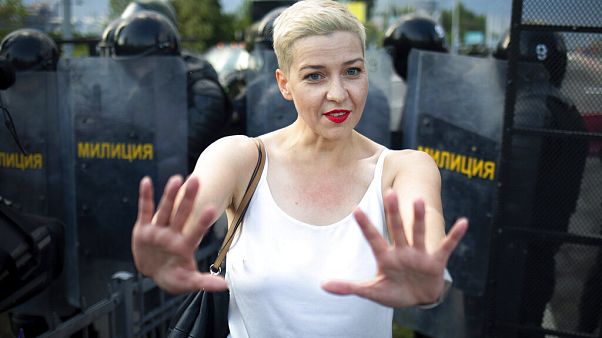 The Investigative Committee of Belarus – the country’s security services – released the information on their official Telegram channel.

Kolesnikova was taken into custody last week following an incident at Belarus’s border with Ukraine where she reportedly tore her passport up to avoid being exiled out of the country.

According to Article 361: “The actions provided for by parts 1 or 2 of this article, committed with the use of mass media or the global computer network Internet are punished with imprisonment for a term of two to five years.”

The two staffers who also disappeared on Monday, Anton Rodnenkov and Ivan Kravtsov, later turned up in Kyiv.

The Ukrainian government confirmed they passed a border check but said Kolesnikova did not.

Her lawyer had subsequently said she would file a complaint against the security services for “kidnapping” and “death threats”.

Kolesnikova is a member of the Coordination Council, the body established by Belarusian opposition groups in an effort to hold talks with President Alexander Lukashenko.

There have been widespread protests in Belarus since a presidential election last month in which Lukashenko was declared the victor with over 80 per cent of the vote.

Opposition figures said the election was mired in fraud and have demanded a fresh contest.

Kolesnikova ran the campaign of Viktor Babariko, a candidate who was detained before August’s election and then joined with candidate Sviatlana Tsikhanouskaya, who came second.

Tsikhanouskaya has since left the country.