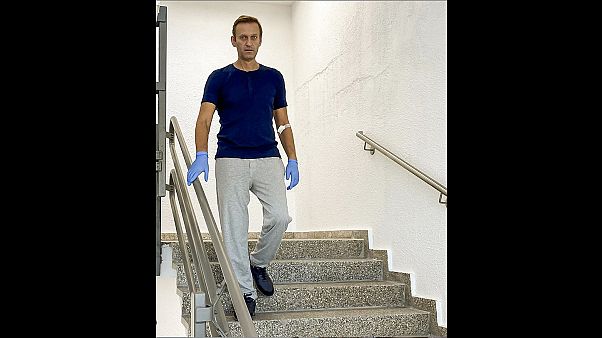 Russian opposition leader Alexei Navalny said he is recovering his verbal and physical abilities at the German hospital where he is being treated for suspected nerve agent poisoning.

He said in a post on social media that he at first felt despair over his condition.

Navalny, the most visible opponent of Russian President Vladimir Putin, fell ill on a domestic flight to Moscow on August 20 and was transferred to Germany for treatment two days later.

A German military lab later determined that the Russian politician was poisoned with Novichok, the same class of Soviet-era agent that Britain said was used on a former Russian spy and his daughter in England, in 2018.

Navalny was kept in an induced coma for more than a week while being treated with an antidote. He said in a post on Instagram on Saturday that once he was brought out of the coma, he was confused and couldn’t find the words to respond to a doctor’s questions.

“Although I understood in general what the doctor wanted, I did not understand where to get the words. In what part of the head do they appear in?” Navalny wrote in the post, which accompanied a photo of him on a staircase. “I also did not know how to express my despair and, therefore, simply kept silent.”

“Now I’m a guy whose legs are shaking when he walks up the stairs, but he thinks: ‘Oh, this is a staircase! They go up it. Perhaps we should look for an elevator,’” Navalny said. “And before, I would have just stood there and stared.”

The doctors treating him at Berlin’s Charité hospital “turned me from a ‘technically alive person’ into someone who has every chance to become the Highest Form of Being in Modern Society again — a person who can quickly scroll through Instagram and without hesitation understands where to put likes,” he wrote.

The Kremlin has repeatedly said that before Navalny’s transfer to Berlin, Russian labs and a hospital in the Siberian city of Omsk found no sign of poisoning. Moscow has called for Germany to provide its evidence and bristled at the urging of German Chancellor Angela Merkel and other Western leaders to answer questions about what happened to the politician.

“There is too much absurdity in this case to take anyone at their word,” Kremlin spokesman Dmitry Peskov said Friday.

Peskov also accused Navalny’s colleagues of hampering a Russian investigation by taking items from his hotel room out of the country, including a water bottle they claimed had traces of the nerve agent.

Navalny’s colleagues said that they removed the bottle and other items from the hotel room in the Siberian city of Tomsk Siberia and brought them to Germany as potential evidence because they didn’t trust Russian authorities to conduct a proper probe.