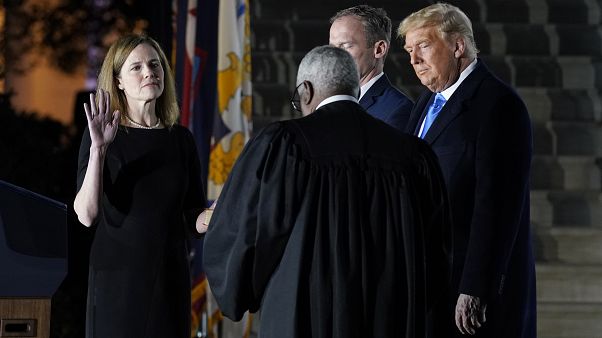 The US Senate voted to confirm Donald Trump’s nominee to the Supreme Court despite weeks of opposition from the left-leaning Democratic Party.

The confirmation of Amy Coney Barrett came just eight days ahead of the country’s presidential elections, in which 60 million Americans have already cast their vote.

The opposition Democrats, who boycotted the judiciary committee vote last week that advanced Barrett to the full Senate, have argued that the person who wins the presidential election should choose the nominee.

The final vote was 52 to 48, with just one Republican, Susan Collins, joining Democrats to vote no on the nomination.

“Tonight the Republican majority will break 231 years of precedent and become the first majority to confirm a Supreme Court justice this close to Election Day,” said Democrat Chuck Schumer on the Senate floor.

National radio station NPR reported that in a note dictated to her granddaughter, Ginsburg’s last wish was that the next president picks her replacement.

The Republicans have made Barrett’s confirmation a top priority with the Senate even holding an atypical overnight session on Sunday night, debating the judge’s nomination.

Donald Trump hailed the confirmation as “a momentous day for America” at a late swearing-in event at the White House. This is the third Supreme Court justice that Trump has nominated to the court.

A change that could last generations

The lifetime appointment of the 48-year-old judge means that the change could last for generations.

“This is something to really be proud of and feel good about. We’ve made an important contribution to the future of this country,” said Senate majority leader Mitch McConnell on the Senate floor over the weekend.

“A lot of what we’ve done over the last four years will be undone, sooner or later, by the next election. Won’t be able to do much about this, for a long time to come,” he added.

Democratic Senate leader Chuck Schumer said on the steps of the Capitol as Senate Democrats boycotted the committee vote that Barrett’s confirmation was “the most illegitimate process” he had “ever witnessed in the Senate”.

He said it would have “dire, dire consequences for the Senate, for the Supreme Court, and our entire country for generations to come”.

There are several key issues that the court is expected to rule on in the coming months, including provisions of Barack Obama’s Affordable Care Act on November 10, which Republicans unsuccessfully attempted to overturn at the beginning of Trump’s mandate.

The court could also rule on election matters, as it previously did in 2000, over a recount of votes in the state of Florida.

“Her views are not within the American mainstream,” Democratic senator Chris Murphy said late Sunday night on the Senate floor, stating that Republicans were not legislating changes that they wanted because their views were “unpopular”.

He said that Republicans were instead using the Supreme Court to push through a more conservative agenda.

Republicans previously refused to consider Barack Obama’s Supreme Court candidate Merrick Garland in 2016, stating that it was too close to the election, although he was nominated a full eight months before the vote.

Over the course of long Senate hearings last week, Democrats peppered Judge Barrett with questions about issues such as abortion, healthcare, and gun policy. Judge Barrett has insisted that she would set her religious views aside when ruling on cases.

Barrett is an originalist, adhering to a similar view of the US Constitution as her former mentor, the late justice Antonin Scalia.

She has been on a federal appeals court since 2017 and teaches at the University of Notre Dame Law School.

Democrats questioned how she would rule on cases, pointing to previous writings where she disagreed with a court decision preserving Obamacare and reportedly said the landmark 1973 case that made abortion legal was wrong.

Healthcare has become a top issue for many Americans amid the COVID-19 pandemic which has killed more than 220,000 people.

The issue of Supreme Court nominations has become a central election issue ahead of the November 3, with Trump pressing Democratic candidate Joe Biden to say whether he would change the number of justices on the court — a practice called “packing the court” — if the Democrats win the presidency and the Senate.

The number of justices on the Supreme Court was set at nine (one chief justice and eight associate judges) in 1869, a couple of years after the country’s Civil War.

Biden told CBS News last week that if elected, he would put together a national bipartisan commission to give recommendations for reforming the court, which he called “out of whack”.