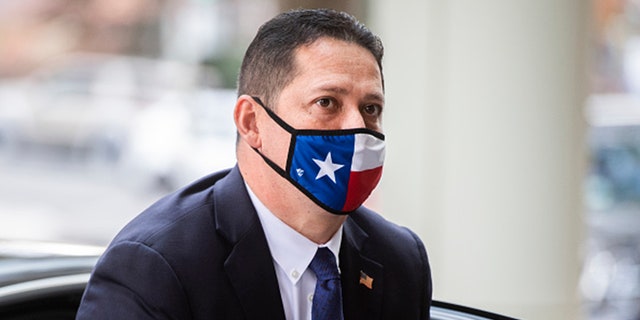 Tony Gonzales, the newly elected Republican congressman from Texas, brings to Washington a drive to tackle border security and immigration reform — examples of thorny issues that the Navy veteran says politicians have avoided for too long.

Gonzales, a Mexican-American first-time politician, will represent a majority Hispanic southern border district that Democrats unsuccessfully targeted to flip this November. Gonzales wants solutions that strike a “balance” between homeland security and commerce. He talks of bringing undocumented immigrants out of the shadows and paying taxes and at some point getting them involved in the “legal process of becoming U.S. citizens.”

“I think it’s a topic that a lot of people — specifically Republicans — haven’t wanted to engage in, and I look forward to engaging in that,” Gonzales told Fox News.

Gonzales said he won his competitive race to succeed the retiring Rep. Will Hurd, R-Texas, by putting 70,000 miles on his Ford F-150 truck, launching a bilingual outreach effort and campaigning in pockets along the Mexican border that Republicans had previously ignored.

“The messenger matters,” Gonzales said of GOP inroads with Hispanic voters. “This is a district that’s over 70% Hispanic. I’m Mexican-American. I’ve got six children. I’m Catholic. I’m a 20-year combat veteran. All those things resonated with this district.”

Gonzales, 40, emphasized his life story of beating the odds. His father abandoned him as a child. His mother remarried, but it was “a very abusive environment.” Gonzales spent time in battered women’s shelters as a kid before moving to live with his grandparents. By the age of 15, Gonzales said he was living on his own. He worked to support himself and dropped out of high school.

But Gonzales found a fresh start by joining the U.S. Navy at age 18 at the lowest enlisted rank of E-1. He was deployed to support combat missions in Iraq and Afghanistan and earned his education in the process. Twenty years later, he rose through the ranks and retired in 2019 as a Master Chief Petty Officer. He’s on a path to earning a Ph.D. in international development and is an assistant adjunct professor at the University of Maryland University College teaching government and politics.

“A large part of my story is the American dream,” Gonzales said. “No matter where you start in life, you can do and you can be anything.”

Gonzales, a husband and father of six children, got the politics itch when he was dispatched to Capitol Hill from December 2016 to February 2018 as a Department of Defense legislative fellow for Sen. Marco Rubio, R-Fla. The experience allowed him to study the legislative process, but he also saw firsthand that too many “tired” lawmakers weren’t willing to put in the hard word to tackle issues like immigration, health care and national security.

“It takes a lot of time and energy, and I just noticed so many members that just seemed tired — and they weren’t all Democrats,” Gonzales said.

He encountered politicians who lost their brilliance and passion for solutions “20 years ago.”

“A lot of these members … were shells of themselves,” Gonzales said. “Why things were so broken in my eyes [was] that we had these members that had kind of lost their way. That was kind of the push I needed to continue serving but in a different capacity.”

Gonzales said he wasn’t asked by the GOP establishment to consider launching his first run for elected office, though party leaders, including President Trump, eventually came to his support.

“Nobody recruited me,” he said. “Nobody goes, ‘Tony, you got a great story. We want to help you.’ It wasn’t that way. I had to fight, scratch, claw to get to [this] point.”

He won a very close primary this summer. Political analysts projected the seat would lean in the Democrats’ favor in November, but Gonzales proved them wrong again.

Now that he’s arrived in Washington for new member orientation, Gonzales said he wants to put in the hard work to deliver solutions to his constituents, many of whom have suffered from coronavirus-related border shutdowns.

He’s not for building a wall along 100% of the border. Gonzales prescribes an “all-of-the-above” approach to border security: a border wall “where it makes sense,” more technology like drones and surveillance equipment, more resources for Department of Homeland Security officers and a welcoming open border in neighboring communities like El Paso and Juarez for economic purposes.

As for immigration reform, Gonzales would start by increasing the number of work visas and streamlining the legal immigration application. “No person should have to wait 10 years to go through the process,” he said.

Gonzales is supportive of the Deferred Action for Childhood Arrivals (DACA) program for so-called “Dreamers” and wants to establish a legal process for undocumented immigrants to come out of the shadows, pay taxes and eventually become U.S. citizens.

Throughout it all, Gonzales wants to be known as a problem-solver and “a patriot that loves this country and will always fight for the country.”