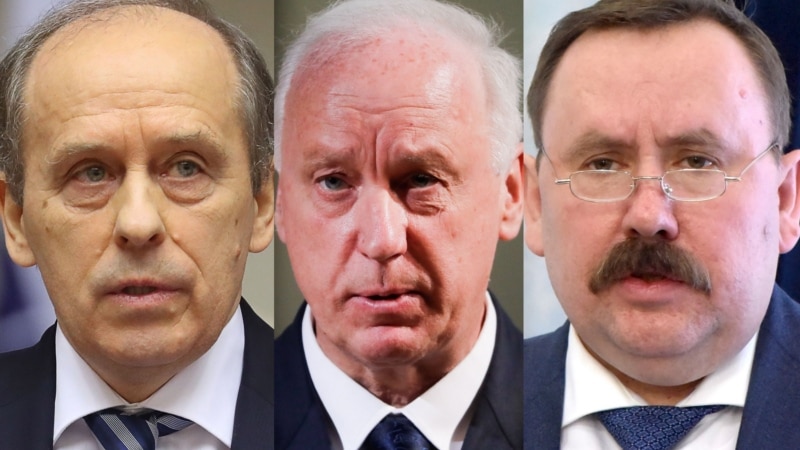 Russia’s caustic Foreign Ministry spokeswoman had this to say: “We urge our colleagues not to play with fire.”

Allies of Aleksei Navalny — the poisoned and now imprisoned Russian opposition activist — lamented that the measures stopped short of what one called “the most painful sanctions… sanctions against the oligarchs.”

[The sanctions were] not meant to be a silver bullet or an end date to what has been a difficult relationship with Russia.”

A day after President Joe Biden’s White House made its first major punitive action against Moscow, experts, observers, and Russian officials scrambled to respond — and to figure out what’s new for U.S.-Russian relations, and what isn’t, at an already turbulent time.

The U.S. action targeted seven top Russian government officials, including the head of the Federal Security Service, which is Russia’s main intelligence agency. Known as the FSB, the service was for the first time explicitly linked by the Biden administration to the August poisoning of Navalny, who nearly died after being exposed to a powerful nerve-agent chemical while traveling in Siberia.

It “was not meant to be a silver bullet or an end date to what has been a difficult relationship with Russia,” White House spokeswoman Jen Psaki said on March 2. “We expect the relationship to continue to be a challenge. We’re prepared for that. And we’re neither seeking to reset our relations with Russia, nor are we seeking to escalate.”

The U.S. actions, which dovetailed with similar ones by the European Union, also targeted nine scientific laboratories and research facilities in Russia that have been linked to potential research of chemical weapons, including one overseen by the Defense Ministry. Five others are located in Germany and Switzerland.

The U.S. sanctions did not, however, target individuals who are among President Vladimir Putin’s most important constituencies: the so-called oligarchs, wealthy businessmen who control major Russian industries and are not part of the government but who are seen as largely beholden to Kremlin directives.

That disappointed some Navalny allies and opposition figures.

Days after Biden took office, a top lawyer for Navalny’s Anti-Corruption Foundation circulated a seven-page letter containing the names of 35 Russians that it suggested should be sanctioned. The list included at least seven oligarchs. None of the seven was targeted by the Biden administration, though several government officials were, including FSB Director Aleksandr Bortnikov; Investigative Committee head Aleksandr Bastrykin; prison service chief Aleksandr Kalashnikov; and Sergei Kiriyenko, the Kremlin’s first deputy chief of staff.

“The most painful sanctions, which, unfortunately, neither Europe nor the United States have yet reached, would be sanctions against the oligarchs,” Maria Pevchikh, a leading corruption investigator with Navalny’s foundation, said in a post on Twitter.

Economic sanctions, visa bans, asset seizures, and similar measures have been the weapon of choice for the United States and its Western allies for years. That includes the 2012 Magnitsky Act, which targets Russians deemed to have committed human rights abuses, and the 2017 Countering America’s Adversaries Through Sanctions Act.

Russia’s 2014 seizure of Ukraine’s Crimean Peninsula, meanwhile, spurred a separate category of sanctions, which helped drive Russia’s economy into a ditch that year and the following one.

Once again, we must admit that the sanctions are not very effective.”

The Navalny sanctions levied on March 2 included those under a 1991 law known unofficially as the Chemical and Biological Warfare Act.

The sanctions announced by the European Union, hours before the White House, targeted four senior Russian officials under its version of the Magnitsky Act, which was put into place just three months earlier.

To date, however, the Kremlin has not fundamentally changed its policies in response to the Western sanctions, leading some officials in Washington and elsewhere to question their utility.

And despite the conclusions of German, French, and Swedish laboratories, as well as the Organization for the Prohibition of Chemical Weapons — that a powerful chemical known to be produced in Russia was the cause of Navalny’s near-death illness — the Kremlin has repeatedly denied involvement.

“We will continue to systematically and resolutely defend our national interests and rebuff aggression,” Foreign Ministry spokeswoman Maria Zakharova said hours after the White House announcement.

The new U.S. sanctions followed, according to the White House, the U.S. intelligence agencies’ conclusion “with high confidence” that FSB officers were behind Navalny’s poisoning.

The White House signaled that more measures — sanctions or otherwise — were in the pipeline.

Essentially ignoring that assessment, as well as voluminous evidence presented by the British-based investigative outfit Bellingcat and Navalny himself, Kremlin spokesman Dmitry Peskov called the U.S. accusations of FSB involvement “outrageous.” He did not elaborate.

Leonid Slutsky, a Russian lawmaker seen as a proxy voice for the Kremlin, dismissed the U.S. assertions that the sanctions were spurred by concerns about human rights and freedoms and by the treatment of Navalny and the thousands of Russians who were detained at recent protests against his jailing.

He echoed past Russian claims that the goal of Western sanctions is to stunt Russia’s development and eliminate competition.

“Human rights protection has nothing to do with this. The aim is to curb the development of Russian science and the defense industry,” Slutsky said in a YouTube video. “Apparently, among other things, this is also a ‘worthy assessment’ of Russia’s success in the battle against the coronavirus and the measures taken to enhance the country’s defense capability.”

The White House signaled that more measures — sanctions or otherwise — were in the pipeline.

One senior official said on March 2 that the administration is expected to announce its response to the SolarWinds cyberattack in the coming weeks. That hack, which the United States has blamed on Russian intelligence, penetrated at least nine U.S. agencies and dozens of major companies.

Navalny was arrested at a Moscow airport on January 17 after he returned to Russia following treatment and recuperation in Germany for the nerve-agent poisoning. On February 2, a court ordered him to serve more than 2 1/2 years in prison after finding that he had violated parole on a previous conviction. Navalny and his supporters say both the previous conviction and the parole violation claim are absurd and politically motivated.

Vladislav Inozemtsev, a Russian economist and director of the Moscow-based Center for Research on Post-Industrial Societies, suggested the measures were largely symbolic: the laboratories targeted have little to no commercial ties with Western companies, and the individuals named are not believed to hold assets or bank accounts in the West.

“Once again, we must admit that the sanctions are not very effective,” Inozemtsev said in an interview with Current Time, the Russian-language network led by RFE/RL in cooperation with VOA. “Firstly, they are not very effective. And secondly, in recent years, Russia itself has been following an economic course that makes the only potential serious blow against it…the actual export of its energy resources.

“An embargo…could seriously undermine the position of the Russian authorities,” he said. “But no one will agree to this, because we perfectly understand how Europe depends on these supplies.”

Leonid Volkov, a political organizer with Navalny’s organization who is now based in Lithuania, said the EU and U.S. sanctions were a “good step forward” but “not enough.”

“What would really create leverage against Putin would be sanctioning the close circle of his oligarchs,” he told AFP.