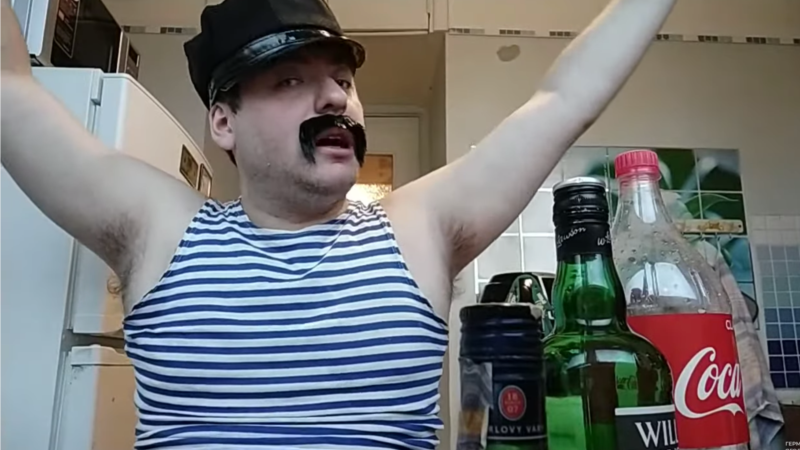 MOSCOW — German Vasilyenko, an ex-porn actor and reality TV show contestant, was working a run-of-the-mill sales job in early 2020 when he quit for a career on YouTube.

The impetus was a series of messages he got after some tipsy revelry at a party hosted by a YouTuber who streamed the event live on the video-hosting platform.

Vasilyenko was used to guilt-ridden hangovers and regrets about the night before. But suddenly, he was being showered with praise.

“Everyone was writing to me saying I’m great, and asking me to set up a channel. I was shocked,” he said in an interview.

Vasilyenko had unwittingly tapped into a murky online subculture called “trash-streaming,” an extreme take on YouTube livestreams that has gained fans and notoriety in Russia.

It has also led to death, injury, and an effort by legislators to curb a practice that has highlighted the state’s limited power to rein in the Internet.

The idea is fiendishly simple: Invite some friends over, get drunk on whatever is at hand, and broadcast the ensuing debauchery live through a computer webcam or smartphone.

But what sets trash-streams apart are the lewd challenges carried out in exchange for small donations from viewers — sometimes humorous but often harmful dares that earn performers instant credit exchangeable for cash, or the digital equivalent of coins dropped in a busker’s guitar case.

Vasilyenko launched his own channel in January 2020, moving to capitalize on the interest in his persona. When much of Russia went into lockdown in April, he left his job and began streaming full-time, playing video games during the day and inviting friends for alcohol-fueled dares at night. “It was easy money,” he said.

However, there’s a dark side to trash-streams. An activity that overwhelmingly attracts residents of Russia’s hardscrabble provinces offers a social lift and the chance of riches to streamers who make it big — but it also rewards and incentivizes those who are most willing to push the boundaries of what’s considered legal and safe.

“The competition is fierce — you have to do something radical to stand out,” said Konstantin Gabov, a sociologist at Moscow’s Higher School of Economics. “And in Russia, perhaps due to a low quality of life, people are ready to do it, and others are ready to pay for it.”

A spate of recent deaths and violent assaults on air has now prompted a clampdown on trash-streaming. But as Russian lawmakers advance legislation aimed at banning them altogether, experts — and the streamers themselves — are skeptical about their chances of putting the genie back in the bottle.

‘Just A Line Of Work’

The trend of “trash-streaming” — a Russian term that uses English loanwords — gained traction in the mid-2010s as a marginal spin-off from the world of video game broadcasts, which comprise the lion’s share of online livestreams.

On platforms like YouTube and Twitch, a livestreaming site, some gamers sought to push the envelope in a bid for more subscribers. When Twitch began banning users for vulgar acts and comments, thousands in the Russian-speaking world migrated to the relatively unbridled ecosystem of YouTube.

Fast-forward to 2020 and the growing but still marginal milieu of trash-streaming was given a boost by the coronavirus lockdown, which expanded streamers’ base of bored and often lonely viewers seeking a sense of community — however bawdy, boisterous, or base. The appeal came from the hosts’ interaction with viewers, whose messages and challenges they read out live on air.

“Everyone’s stuck at home. And here you can sign on and take part in something real,” said Ekaterina Kolpinets, a lecturer on digital culture also based at Moscow’s Higher School of Economics. “No matter how wild it is, it will find an audience.”

The pioneers of trash-streaming include a Russian gamer called VJ Link. In 2013, he invited a hairdresser to his apartment and kept his livestream rolling when her husband stormed in and assaulted the YouTuber for allegedly harassing his wife. VJ Link was accused of staging the scene, but he was credited for helping spawn a new genre.

“This is just a line of work. People do it for money,” VJ Link, whose real name is Kirill Zyryanov, told RFE/RL. “And ultimately the masses like it. Where there’s demand, there’s supply.”

Trash-streamer Stas Reshetnyak’s extreme stunts have resulted in him having to face charges over the tragic death of his girlfriend.

Zyryanov has run his YouTube channel for almost a decade, and has 435,000 subscribers. In 2017, he began appearing on trash-streams with Stas Reshetnyak, aka Reeflay, who went to extreme lengths for viewer donations. He roughed up his girlfriend on camera, humiliated his guests, and tattooed one participant’s arm with the name of a paying subscriber. A box in the corner of Reelfay’s screen listed the cost of various obscene stunts.

Reshetnyak eventually introduced Zyryanov to Andrei Burim, a teenager from Belarus streaming under the name Mellstroy and amassing a large following. Burim began inviting Zyryanov to parties at his luxury rented apartment inside Moscow’s Federation Tower, Europe’s second-tallest skyscraper, and Zyryanov would engage in drunken fights with other guests and complete challenges – usually taking home 50 percent of the money his stunt earned, with the rest going to the host.

Last year Zyryanov joined 21-year-old Burim for a two week-long trash-stream from a rented house in St. Petersburg. “It was all-inclusive. We drank every day, there was food, and a nice place to sleep,” he said. Burim paid him $900 for his troubles, but the biggest reward was the exposure he got as a YouTuber, including brand deals and new followers who help finance a lifestyle far removed from that of his working-class parents.

Trash-streaming reached a sort of zenith this past summer, when businessman Aleksandr Timartsev launched a reality show called Sosed.tv. At the height of the pandemic he placed a bunch of strangers in a shabby house with cameras overlooking every nook and cranny, and published a price list online for challenges including “drink a bottle of hard liquor” and “smoke a pack of cigs” – and whatever else viewers wanted if they were ready to pay the price.

The concept never took off, though it continues despite low viewership and reports of sexual harassment and a rape allegation by one participant that was widely reported in September, the first in a series of shocking incidents that would thrust trash-streams into the spotlight and prompt a clampdown by the Russian government.

Trash-streamer Mellstroy (Andrei Burim) with Instagram model Alyona Yefremova during one his broadcasts at Moscow’s Federation Tower, seconds before he assaulted her.

In October, police launched a criminal investigation after Burim violently assaulted 21-year-old Instagram model Alyona Yefremova during one of his parties at the Federation Tower, a scene he broadcast live to his 700,000 subscribers. In December, Reshetnyak was arrested on charges of causing the death of his girlfriend, Valentina Grigoryeva, whom he locked out in sub-zero temperatures wearing only her underwear. “I swear she doesn’t even have a pulse,” he said to the camera as he carried her dead body back into the house.

All of this — Reshetnyak’s tears as her body lay on a sofa behind him, his conversation with the ambulance crew and the police officers who soon arrived – was streamed live to thousands of viewers on YouTube. The trash streamer faces 15 years in prison if convicted. He denies the charges, but investigators have said Grigoryeva’s heart stopped under the influence of drugs and the searing cold.

Authorities have also begun investigating the case of Valentin Ganichev, a handicapped man who was passed among seven different YouTubers over a period of several years, living in their homes as they humiliated and beat him on camera for viewer donations. In one stream he was buried alive in the back garden of a house in Bryansk, southwest of Moscow. “You’ll be famous!” one tells him as he bawls uncontrollably.

In October, in a video response to Burim’s arrest, popular YouTuber Yury Khovansky called trash-streamers “a zeitgeist, a spirit of the times, of the fact that we are ready to part with our human dignity for easy money.”

“Listen carefully: Easy money is great, but in the long run it’ll bury you,” Khovansky said in an obscenity-filled monologue viewed by 2.3 million people. “The house always wins.”

The legislation being debated in Russia’s Federation Council, the upper house of parliament, would mandate punishment of up to six years in prison for those who violate a proposed ban on trash-streaming. But experts say the initiative, which comes at a time of increasing state censorship in Russia, is doomed to failure.

Russia sought to ban the Telegram messaging app but after an unsuccessful effort lasting two years, it officially abandoned the idea last June. Gabov and Kolpinets say the ban on trash-streams is likely to suffer a similar fate. They point to the alt-right exodus to Telegram after Twitter banned Donald Trump, or the migration to TikTok after Instagram stopped displaying the numbers of “likes” on posts.

“These days you can’t ban something and expect people to say ‘ok, it’s over.’ They simply move to another platform,” says Kolpinets. Gabov says the legislation will most likely be powerless unless a specific crime is committed.

Vasilyenko says the trash-streaming community is waiting for more details on the law, and especially how lawmakers will define the activity. But he asks, “if a person consents to something, why shouldn’t it be allowed?”

In the meantime, fatal accidents keep happening. On January 28, 60-year-old Yury Dushechkin died after drinking a liter and a half of vodka in exchange for viewer donations during a trash-stream in the western city of Smolensk that was watched by some 300 people. Russian media reported that Dushechkin was one of several homeless men who were regularly invited to a channel run by a local entrepreneur and paid with alcohol for completing viewer challenges.

YouTube, which did not respond to a request for comment, has banned Burim and Reshetnyak’s channels and removed various trash-streams from its site. But the streamers find a way to keep working. Burim continues to broadcast his parties, opening new YouTube channels that get blocked as soon as his face appears on air.

Vasilyenko is planning to team up with another St Petersburg-based YouTuber to purchase a bus and drive around the Russian city with friends while they broadcast online everything that happens on-board.

Zyryanov, who continues to attend Burim’s streams, says he will rent a large country house for four months starting in May and stream 24/7 throughout the summer on his channel — a “trash” reality TV show, just like Sosed.tv.

He says he’s just getting started.

“This is a profession. I live off this, and can’t imagine life without it,” he said. “I might disappear from the web for a week. But I will never stop broadcasting.”