Since the arrival of Covid-19 vaccines, a crucial but largely unspoken question has loomed large for countries looking towards returning to pre-pandemic life: How much sickness and death will occur even after nearly everybody has been jabbed?

Possible answers to that question are coming into view as a growing number of territories get close to their maximum vaccination rates.

Although varying considerably, the emerging picture points to a post-vaccinated future in which societies may have to accept significantly more Covid-19 deaths than those caused by the flu to move beyond restrictions such as lockdowns and border closures.

While European countries with high vaccination rates have largely returned to normal life, living with Covid-19 could prove more difficult to accept for Asia-Pacific economies that avoided even flu-level death rates by sealing their borders.

“My personal feeling is that, after brainwashing people in many places with this fight against the virus and suppressing it, telling people that everything would be back to normal with a vaccine, politicians are finding the inconvenient and unpalatable truth difficult to sell,” said Roberto Bruzzone, an infectious-disease expert and co-director of the HKU-Pasteur Research Pole in Hong Kong.

“It seems that we can die of all kinds of diseases, but not of Covid-19. We do not need numbers to be anaesthetised and trivialise suffering, but death is part of life and we need to keep this pandemic in perspective.”

Despite growing frustrations among residents and businesses, Hong Kong – where 213 deaths have been reported – has yet to lay out a road map for easing some of the world’s strictest border controls, including 14 to 21 days of mandatory hotel quarantine for practically all arrivals.

More so than the city’s vaccination rate, which is about 52 per cent, many observers believe reopening depends on Beijing. The central government is widely expected to keep China closed until well into 2022 and possibly even beyond.

Australia, which has abandoned its “zero-Covid” policy amid major outbreaks in Sydney and Melbourne, is looking to end lockdowns and restart international travel before the end of the year, even as debate rages among health experts and state leaders about whether Canberra is moving to reopen too fast. After a slow start, Australian authorities have ramped up vaccinations in recent weeks, with about 38 per cent of the total population now fully covered.

New Zealand, which is about 33 per cent fully vaccinated, in August laid out a road map for a phased reopening of its borders from early next year, but government figures have since expressed doubt about the plan amid the emergence of the highly transmissible Delta variant.

Singapore, which has reported 62 deaths, is struggling to follow through on its widely publicised pledge to live with the virus amid rising case numbers, so far only allowing quarantine-free travel from Germany, Brunei, Hong Kong, Macau, mainland China, and Taiwan.

Although the city state on Monday reported 917 new cases, the overwhelming majority of infections were mild, with just 18 patients requiring intensive care out of the 1,055 in hospitals.

Julian Savulescu, a philosopher and bioethicist at the University of Oxford and University of Melbourne, said countries that had followed elimination or zero-Covid approaches continued to have “unrealistic expectations of safety and near immortality”.

“It will require public education or realignment of expectations,” he said. “When smallpox was rife, you wouldn’t even have noticed the Covid pandemic. That is not to say that we should return to the bad old days – we should try to prevent death whenever it is reasonable. But every life has a maximum price. The response of many countries has arguably been disproportionate.”

But Alexandra Martiniuk, an epidemiologist at the University of Sydney School of Public Health, said she believed countries that had largely kept Covid-19 at bay could aim for even lower death rates than indicated by the emerging data from highly vaccinated countries. 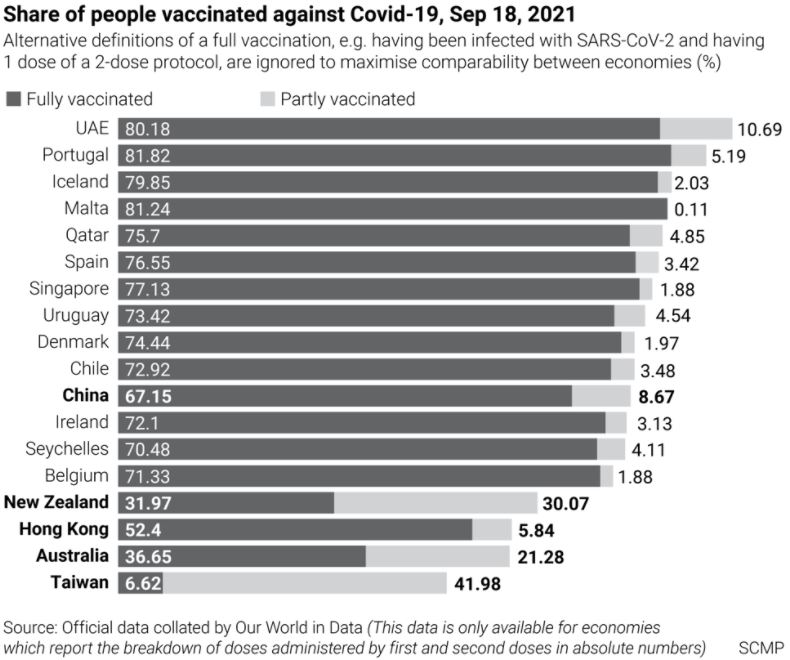 “Many people want to be done with Covid, but there are many more improvements yet to be seen,” she said, predicting that vaccinating young children would be a next step. “Countries can aim higher.

About 95 per cent of children in many countries are vaccinated against measles, polio – we can aim high for Covid vaccines. We can smooth out vaccine coverage, ensuring a more equal distribution across countries.”

“New treatments are coming all the time,” Martiniuk added. “Some may assist people when they first become ill.”

At least 13 countries had fully vaccinated more than 70 per cent of their total population as of September 18, according to Our World in Data figures, a level of coverage with relatively little room for growth due to pockets of vaccine hesitancy and the lack of approved vaccines for those under the age of 12 in most territories.

A handful, including China, Cambodia and Chile, have authorised vaccines for young children, who are at extremely low risk of serious illness, while authorities including the US Food and Drug Administration are considering approval.

On Monday, Pfizer and BioNTech announced that trials showed their vaccine to be safe and effective for children between the ages of five and 11, with the companies planning to apply for emergency authorisation in the United States before the end of the month.

Apart from Singapore, which has yet to experience deaths on a large scale, Covid-19 mortality rates in the other 12 countries – Spain, Portugal, Belgium, Denmark, Ireland, Iceland, Malta, Qatar, United Arab Emirates, Uruguay, Chile, and Seychelles – have declined dramatically from their pandemic peaks.

But mortality rates between these countries – which have only minimal restrictions, such as requiring masks indoors and, with the exception of Singapore and Uruguay, allow quarantine-free arrival for vaccinated travellers – vary significantly. 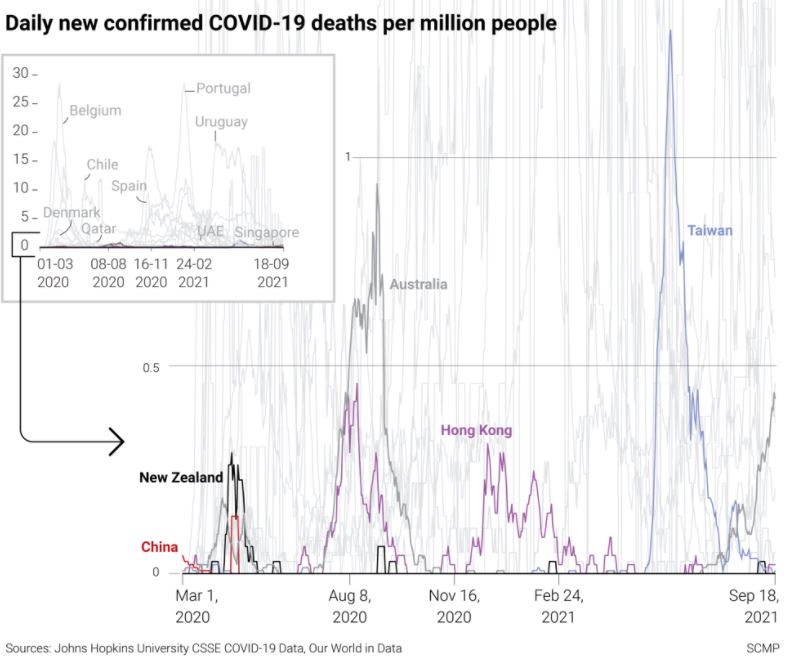 At the upper end, Malta and Spain respectively had seven-day averages of 1.67 and 1.51 daily Covid-19 deaths per 1 million people, according to the Our World in Data figures.

Spain’s daily average of 70 deaths from the disease would equate to 25,550 deaths over a year, about 60 per cent higher than the combined tolls of its 2019 and 2018 flu seasons, as calculated by the National Centre for Epidemiology.

Ireland, Portugal, Belgium, Uruguay, and Denmark had between 0.34 and 0.69 daily coronavirus deaths per million.

Spread across a year, Denmark’s average of two Covid-19 deaths a day would total 730, about on par with its 2017 and 2019 flu seasons. By comparison, Ireland’s daily average of three deaths would be equivalent to roughly twice the annual toll from the flu.

Singapore had just 0.05 coronavirus deaths – translating into one or two deaths every few days – while Iceland, Qatar and Seychelles had an average of zero deaths.

Siddharth Sridhar, a virologist at the University of Hong Kong (HKU), said while there was no playbook for reopening, authorities in places such as the city had “better begin preparing the public that we are going to have to take this painful walk eventually”.

Catherine Bennett, an epidemiologist at Deakin University in Melbourne, said although the vaccines were not a silver bullet, they should allow societies to live with the virus.

“Now, as we give up on the expectation of returning to Covid zero as we bring the current outbreaks under control, it is hoped this will make the transition to living with the virus more acceptable and possible for all, even though it will come with a death toll,” she said.

“If we can get the number of serious cases in hospital or [in intensive care] down to flu levels, then I think most people would accept that. If the deaths are in unvaccinated younger adults, though, that will be different. It may then push vaccination rates higher rather than forcing us to take a step back into tougher restrictions.”

Calvin Ho, an expert in medical ethics at HKU, said it was difficult to say what levels of disease and death societies were prepared to accept given their varying conditions, but international isolation would be difficult to sustain without serious economic and social costs.

“I do agree that we do need to base our conversation on what our health systems could realistically manage, and understanding that it is highly improbable that Covid-19 will suddenly disappear and it is equally unlikely that a perfectly safe medically induced endpoint will be reached,” he said.

Savulescu, the University of Oxford bioethicist, said there needed to be a balanced discussion that placed Covid-19 in context, instead of viewing the disease as the sole concern of society.

“We have to balance values, not consider only one to the exclusion of all others,” Savulescu said, describing the tendency of people to place undue significance on information that is in front of them and prefer avoiding losses to making equivalent gains.

“Part of the reason for this is change in communication through the internet and social media – it hijacks all our weaknesses, biases, and worst tendencies to tribalism and other moral and cognitive biases, including loss aversion and availability bias.”