Singapore—It was a good thing it was a Sunday and traffic was light, or a poor, albeit quite big, monitor lizard lounging in the middle of the road might have lost its life.

What made it even better was that a pair of police officers, a man and a woman, came along to save the day.

The male officer, in particular, proved to be the man of the hour.

After putting on gloves, he tried to help the lizard make it to safety by gently nudging the back of its head and prodding its tail in the right direction, as well as pointing to the grassy area on the side of the road. When the lizard did not seem to take the hint, the officer gingerly carried it to safety, and the group that was watching erupted in cheers. 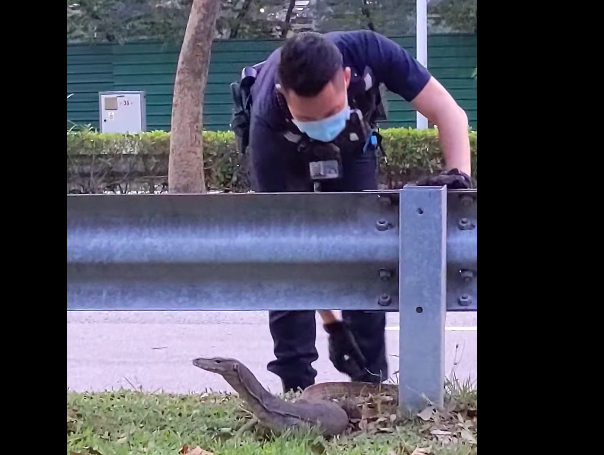 Then the police brought the creature to the shoreline of the Kallang Basin, where the female officer can be seen waving goodbye to it. The creature was saved from becoming roadkill by the neighbourhood police, one young woman pointed out in the short video clip that captured the rescue.

News reports say that the group that filmed the incident was from the educational website Just Keep Thinking.

One of the young men can be heard describing the lizard as “just chilling”.

Last Sunday (Apr 18), they saw the lizard in the middle of Republic Avenue in Kallang and called the police for help.

The video was also uploaded on the popular ROADS.sg Facebook page, where the police seem to have gained new fans, since rescuing animals is not, strictly speaking, their duty. Send in your scoops to [email protected]