SINGAPORE – Spectators, armed with cameras, colourful umbrellas and inquisitive eyes, lined the pavement along Claymore Hill on Wednesday morning (Jan 26) with the centre of attention being a petite figure delivering some big serves on a tennis court.

US Open winner Emma Raducanu had returned to the Tanglin Club for a practice session, a day after The Straits Times reported that she had been spotted having a hit with local players there. She is understood to be transiting in Singapore for a week following her exit from the ongoing Australian Open.

On Wednesday, she was seen practising with her coach, Torben Beltz, and Singaporean player Roy Hobbs, who has the most Davis Cup match wins for the Republic.

This time, there was a considerable increase in the number of onlookers at Raducanu’s practice session, those who had been present on both days told ST.

Over 30 people caught a glimpse of the 19-year-old British star in action from the outside of the tennis court facility, with the hot morning sun appearing hardly a bother.

Inside, almost 50 others watched from a balcony situated above the tennis courts, some of whom were armed with cameras fitted with ultrazoom lenses.

Sources tell ST that the Tanglin Club had even set up a queue system so it could ensure safe management measures were adhered to by the eager crowd.

Raducanu was seen exchanging different types of shots with Hobbs, with Beltz by her side giving her pointers.

Shortly before noon, the session ended and the teen was soon whisked into a waiting van.

A swarm of fans gathered at the vehicle but were unsuccessful in getting photos or an autograph, although they did receive a big smile and a wave from the tennis star as her van began to move off.

One observer, who only gave her name as Audrey, lives opposite the club’s tennis courts and said she had learnt of Raducanu’s presence in Singapore from ST’s report.

Having watched the teen’s entire two-hour session, she said: “It’s so different to see a player in person and on television.

“Even with the close-ups on TV, you don’t get to see their personality but here, you do.

“She seems so personable, chatting with her training partner, smiling a lot and having snacks during breaks at the side of the court.”

Audrey said she has a strong interest in tennis and has a daughter aged 11, who plays in the national developmental training squad but could not watch Raducanu train because of school. But she was keen to pass on her observations to her daughter.

“I will definitely tell my daughter that Emma was very serious about warming up, stretching, stuff like that… you know how kids are, they just want to hit the ball,” she said.

Student Justin Hsieh wore a rueful look as he exited the Tanglin Club without a photo with Raducanu.

“Her agent said no photos (were allowed) because yesterday too many people asked already,” said the 13-year-old, who plays socially. “But at least I got to watch her train and play a bit, and that was interesting.”

It is understood Raducanu is headed to Dubai after her Singapore pitstop, though her name is not on the entry list for the Women’s Tennis Association (WTA) Tour event there in February.

Raducanu made history in 2021 by becoming the first qualifier to win a Grand Slam title.

However, she was knocked out of the Australian Open in the second round after a loss to Montenegro’s Danka Kovinic last Thursday. 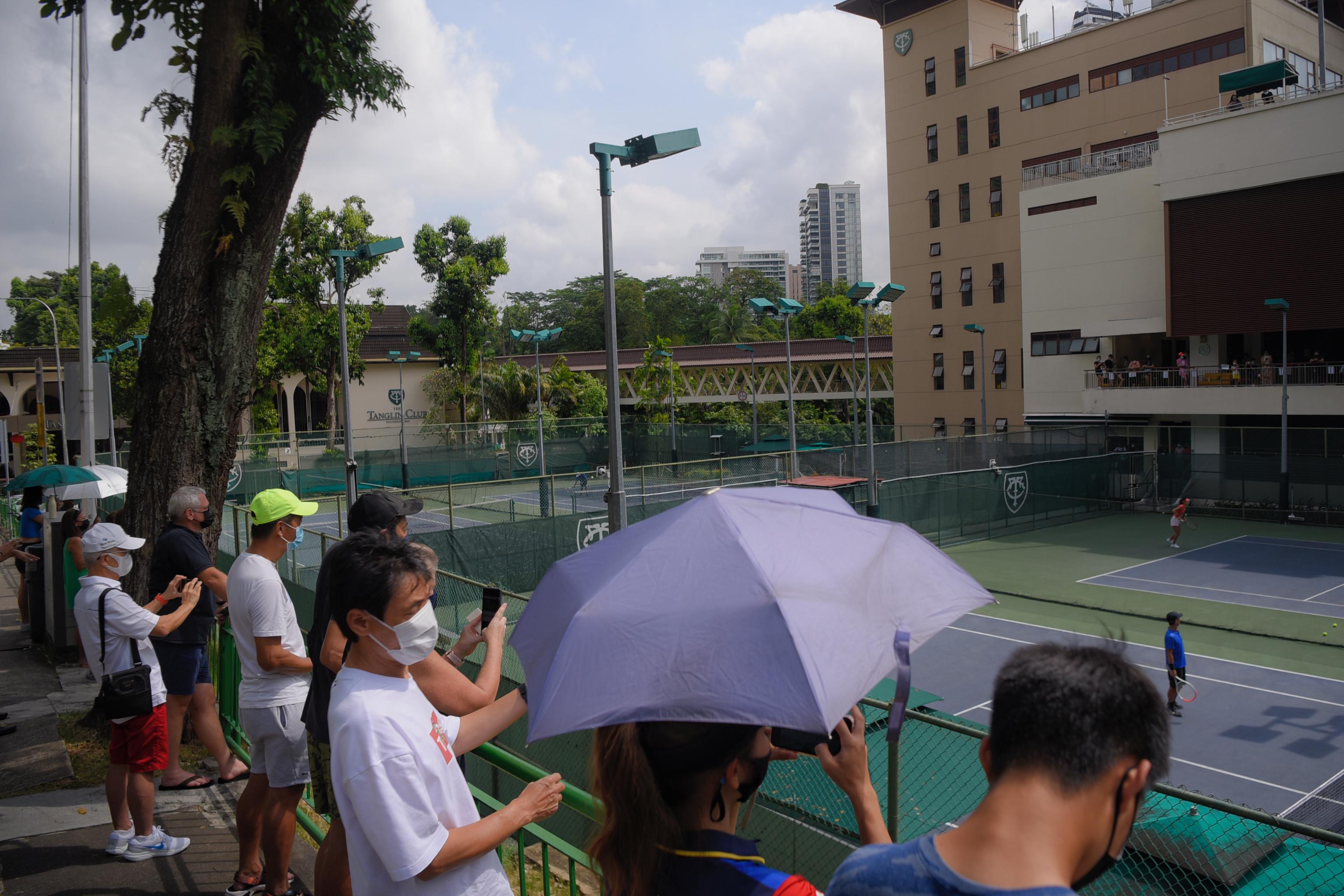 Playing in her first main draw at Melbourne Park, Raducanu was hampered by blisters on her serving hand.

The BBC Sports Personality of the Year, who had also suffered from Covid-19 last month, had beaten 2017 US Open Champion Sloan Stephens in three sets in the first round.